Meet Austin Williams, the internet’s newest sensation. Okay, so he’s not exactly a Kardashian, but in the wake of his late-night Stock Eliminator win at the Chevrolet Performance U.S. Nationals, Williams has “gone viral” as they say, with a flood of photos, videos, and a host of hilarious “memes” posted to his Facebook page. Competing on drag racing’s biggest stage, and at the end of a week-long marathon that stretched long into the evening hours on Monday, Williams may have been exhausted but it didn’t show when he tagged the Tree with a perfect .000 light that led to a narrow 11.058 to 11.043 holeshot victory over opponent Matt Antrobius. Winning any Indy title is an impressive feat on its own merit, but to win a heads-up final round using a perfect light, makes Williams the talk of the sportsman racing community. 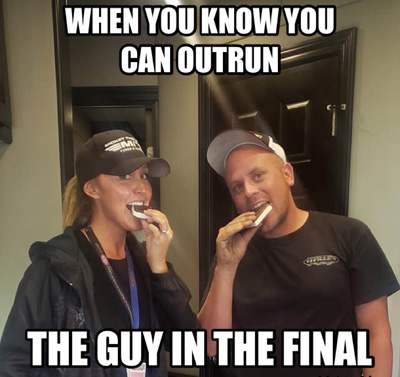 “The funny thing is that this is actually the second time that I’ve won a race with a heads-up race in the semifinals and another one in the final. That also happened when I won the [JEGS SPORTSnationals] in Louisiana in 2014,” said Williams. “I also won that final on a holeshot against Jimmy Hidalgo. This is unbelievable just because it’s Indy. I’m still totally in shock.”

Williams road to Indy glory actually begins a few weeks ago when he made the decision to park his familiar orange Duster and race longtime friend and partner Butch Marlow’s H/SA ’69 Camaro. Williams has raced the Camaro on several occasions and has had past success in the car. It’s also a bit quicker than the Duster, relative to index and after failing to qualify in his only other appearance at Indy in 2014, Williams wanted to make sure he was carrying the right tool for the job.

“Its not that the Duster wouldn’t qualify; I just wanted to have a better chance and I was also looking for a change of scenery,” said Williams. “Sometimes, that allows you to focus better. When the ladder first came out after qualifying, I was concerned that I might have a heads-up race against Chris Butcher in the fourth round and he had me covered. He lost early, and when we got down to 16 cars I saw that there were two other H/SA cars still in, Eddie Brooks and Matt [Antrobius]. I ask my mother to go find some ice because I wanted to be prepared. It was late on Monday and I figured the concession stands were closed so we went to Bo [Butner’s] pit. We took what he had and cooled the car down for the semi’s, and then went back to get more for the final.” 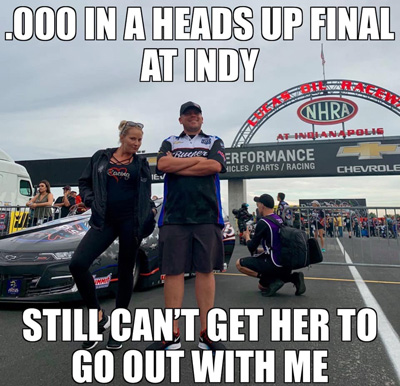 In preparation for his heads-up runs in the semifinals and final, Williams not only cooled the engine, but also removed about 20-pounds of excess ballast, drained nearly a quart of oil from the engine, adjusted tire pressure, and changed the starting line rpm. The end result was a convincing 11.101 to 11.175 win over Brooks in the semi’s, and his holeshot won against Antrobius in the final.

“In class on Thursday, I ran 11.07 and Matt ran 10.95 and I assumed he could do that again,” Williams said. “I was about a tenth behind but thought I might have a change. I was shocked that I was .000 on the Tree and even more shocked that he wasn’t next to me. Matt made a heck of a run to the finals and beyond. We got out of our cars to shake hands and chat right after the fact; he was the epitome of a class act. It was an honor to race him. For the heads-up final, Mike McMahan helped with some dry ice and Bo Butner gave me some wise advice to only chip up 200 instead of 400-rpms. That proved to be a huge decision. Randi Lyn Shipp, Jeff Lopez, Jeremy Maples, Cody Moore, Joey Shipp, Kristi Shipp and all the Emmons clan were there to help in the final. It was truly appreciated. 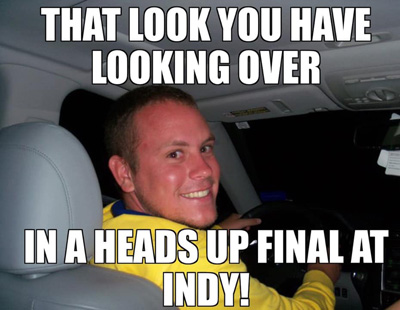 “I also can’t thank my crazy parents enough for traveling across the country so we can race at some of the most prestigious races,” said Williams. It’s the Big Go and we did it in one of the most epic ways imaginable. I couldn’t script it or have it any other way. I’ve raced with Butch Marlow for ten years now and appreciate him handing me the keys to his Camaro for Indy. It proved to be the perfect tool for the job.”

Williams was also admittedly humbled, slightly embarrassed, but mostly amused by the outpouring of congratulations messages, texts, and even the photos and “meme’s” he’s seen since etching his name in the roster of Indy champions.

“I think that was a pretty epic way to win Indy; a heads-up final in a performance-based category,” Williams said. “Apparently, I have a lot of friends who don’t work and have plenty of time on their hands. They certainly kept things entertaining on my Facebook page. Someday, I’ll have to make a book with all this stuff in it.” 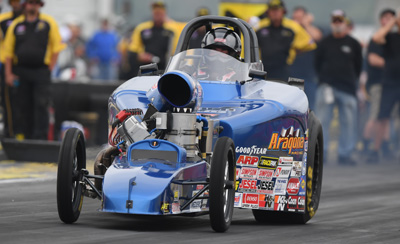 The best of the rest: Frank Aragona Jr. has already won a pair of national championships in Comp elimiantor and he’s in line for a possible third title this season, but he’d never won the U.S. Nationals until this year when he defeated David Billingsley to win the title. Aragona gave up .14-hundredths in index before the final round but still had enough left to take his J/AA Bantam to the victory with a (-.568) 7.602 that held off Billinsley’s (-.519) 8.061. Billingsley didn’t take an index hit until the semifinals where he used a (-.580) 8.66 to stop three-time Indy champ Brad Plourd, who was the low qualifier in Harry Schwartz’s quick AA/AM.

Tyler Cassil honored the memory of his late grandfather, Bob, in the best way possible, by winning the Indy Super Stock title in a Monday evening final round. Cassil wasn’t planning to enter the “Big Go” until he realized this was the 50th anniversary of his grandfather’s first Indy. A discussion with his father, Tracy, and car owner Ward Munkres, was all it took to get them on the road to Indy. Cassil raced Dave Dupps Jr. in the final round and won in a double-breakout with a 9.346 on his 9.35 dial. Cassil was also the class champion in FSS/H with the team’s ’14 COPO Camaro. 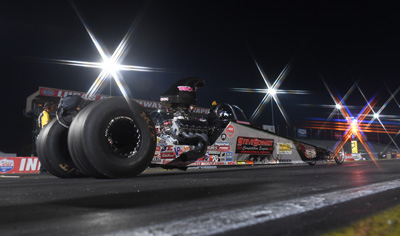 With more than 128 cars in the field it took eight rounds to decide a winner in Super Comp and it was not the least bit surprising to see two accomplished veterans, Lynn Ellison and Rock Haas square off for the title. Ellison, the 2012 U.S. Nationals Super Comp champ and the 2017 Top Dragster national champ, finished off his second Indy win with a .008 light and an 8.923 to edge Haas’ 8.922. With the win, Ellison has now claimed nine national event victories across four different classes, Super Comp, Super Gas, Top Dragster, and Super Stock. Haas made it to his sixth career national event final round, and first in a decade after he stopped Shanna Stone in the semi’s.

It’s often noted that the two toughest events for an NHRA sportsman driver to win are Chicago, because of the JEGS Allstars race, and Indy, because well, it’s Indy. Nathan Vrooman has won both of them this year following his final round win against Steve Hoyt. Vrooman, in his ’91 Beretta, closed the deal with a 9.919 and a .010 light while Hoyt trailed with a 9.920. The win was Vrooman’s third in national event competition including the 2012 Norwalk event. Vrooman had his work cut out for himself every step of the way in the eight-round race including the semifinals where he defeated reigning national champ and Defending Indy winner Devin Isenhower, who ran his win streak to 13 rounds before foulding against Vrooman.

Two weeks after winning the Lucas Oil NHRA Nationals in Brainerd, Larry Demers struck again when he became the first driver to win Indy in Top Sportsman presented by Racing RVs.com. In a bizarre twist of fate, Demers did not qualify for the tough 32-car field, but got in as an alternate and made his way to the final where he stopped Belva “Badeye” Brinegar with a perfect 6.752 on his 6.75 dial. Demers also topped national event winner Glenn Butcher and former Pro Stock racer Paul Pittman in order to make the final round. 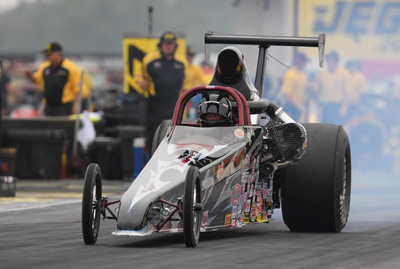 In many ways, Top Dragster presented by Racing RVs.com stole the show at Indy with a record 32-car field qualified between a 6.100 (the quickest allowable elapsed time) and a 6.234 by past Super Comp world champion Al Kenny. All but two of the qualifiers were over 220-mph and it took a 6.132 to make the top half of the show. The final round featured six-time Indy winner and seven-time world champ Peter Biondo and Rusty Baxter, who was appearing in his first national event final. Biondo, looking to join Jeg Coughlin Jr. with a win in a seventh-different class, crossed the finish line first, but lost in a double-breakout. With the win, Baxter not only made history as Indy’s first-ever Top Dragster champ, but he moved to second place in the season points standings, just 20-points behind leader Ross Laris, who was also the low qualifier at Indy.