The Sport Report: The waiting game

Joe Santangelo took advantage of his final chance to earn points by winning the Stock title in Reading; now he’s got to wait to see if he can hold on to the points lead in Stock and Super Stock.
18 Sep 2019
Kevin McKenna, NHRA National Dragster Senior Editor
The Sports Report 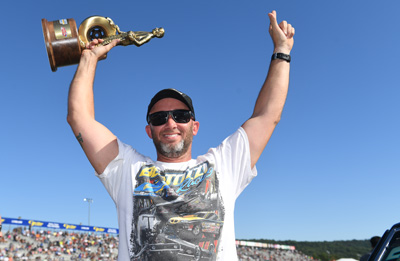 Following last weekend’s Mopar Express Lane NHRA Nationals presented by Pennzoil, Joe Sangangelo’s scorecards are complete in both Stock and Super Stock and they are both impressive. Santangelo already won a national championship in Stock in 2011, and he could be in line for one, or perhaps two more since he’s the current leader in both Stock and Super Stock. The Reading event was Santangelo’s final event of the season to earn points and he made the most of it by winning the Stock Eliminator title.

Santangelo won his second race of the season in Stock when he defeated Randi Lyn Shipp’s Firebird in a classic battle of vintage muscle cars. Santangelo left first by a hundredth of a second and sealed his 16th career title by running 10.385 on his 10.38 dial while Ship broke out by five-hundredths.

“Randi Lyn is my good buddy; She has two wins already this year, and she has Bo [Butner] in her corner so I knew enough not to take her lightly,” said Santangelo, who went unbeaten in Reading this year after winning the track’s Lucas Oil Series event in May. “It was a good close race and the numbers just worked my way.”

The ’69 Camaro that Santangelo races in Stock is owned by his longtime friend and former Super Stock national champion, Anthony Bertozzi. The car is not only a competitive Stocker, it’s also well-known for its sky-high wheelstands, which were on full display in Reading. Hands full with races against some of the toughest Stock drivers in the Northeast Division including Shane Oakes, Anthony Fetch, and Matthew Lisa. 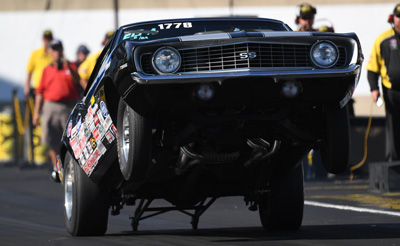 “I’ve raced a lot of different cars and gone a lot faster than this, but nothing I’ve driven is even half as much fun as this car is,” said Santangelo. “I have to pull second gear when I’m straight up in the air in in the middle of a wheelstand. It’s an old fun muscle car, and it’s a lot of fun. I’m thankful that Anthony lets me drive it. He’s currently home nursing an injury; he sliced his leg open and he’s going to be out of commission for a while, but I’m really grateful to him. I call him Saint Anthony because he does so much for so many other people. I consider myself lucky to be friends with him.”

With two wins and four semifinals on his scorecard, Santangelo finished as the leader in the clubhouse with 644 points in Stock. Heading into the home stretch of the 2019 season, he’s got a 42-point lead over Jody Lang, who is in second place. Lang has one national event left to claim and would need to reach the semifinal or final round (depending on field size) in order to pass him. Allison Doll, Indy winner Austin Williams, and Slate Cummings are also in the mix for the Lucas Oil Stock championship. Now, Santangelo has to sit back and see how the rest of the season plays out, but he’s always got to head West to act as a blocker if necessary. Santangelo also leads in Super Stock with 614 markers, but his odds of winning that title appear to be much smaller. He’s got Kyle Rizzoli, Ricky Decker, Stephen Comella and a handful of others breathing down his neck and all of the contenders have additional races where they can earn points. 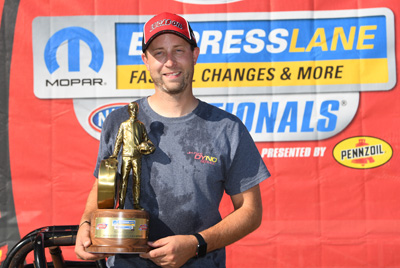 The best of the rest: Tom Martino’s bid for a third-straight Comp win in Reading remained intact until the final round where he lost to Christopher Piston, who was appearing in his first career final round. Piston, in a four-cylinder powered F/DA, ended Martino’s Reading win streak at 14 rounds in the final with a (-.503) 8.117 that was boosted by a sharp .011 reaction time. Piston also drove to wins against Chip Ippoloito, Pat Ross, and David Kramer to reach the final. Martino, driving for car owner Ken Voight, defeated current points leader and reigning champ Frank Aragona Jr. on a holeshot in the semifinals. That win was costly, with a .16-hundredths CIC penalty heading into the final. 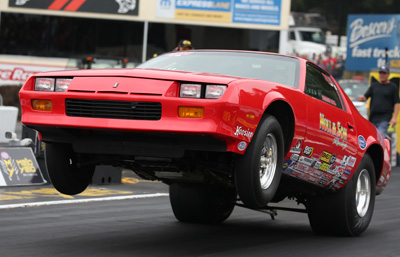 Herbie Null Jr. now has six national event wins to his credit including Indy and a pair in Reading thanks to an impressive final round performance in Super Stock. Null was almost unstoppable in the final with a .012 light and a perfect 9.700 on his 9.70 dial that was too much for runner-up John DiBartolomeo to overcome. DiBartolomeo, coming off a win a week earlier at the rain-delayed Summit Racing Equipment Nationals in Norwalk, was very competitive with a .029 light and a 9.271 on his 9.26 dial. Null had a tough road to the final round with a quarterfinal race against points leader Santangelo and a semifinal bout against his buddy and traveling partner, Bryan Worner, who fouled. DiBartolomeo also had a tough draw with a semifinal race against past Stock champ Michael Iacono, but that was also decided via a foul start. 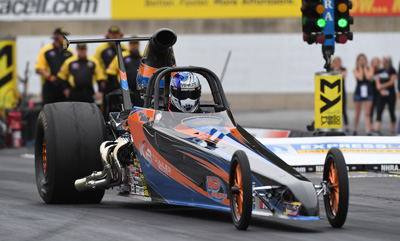 After winning the Division 1 Super Comp championship last season, Kyle Bigley checked off another important milestone by winning his first NHRA national event title. In a rematch of the final round from Epping in June, Bigley got the best of Ken Moses when it mattered most with an 8.926 to 8.940 battle that was decided by just four-thousandths of a second at the Stripe. Bigley, who was also a finalist at the Epping Division 1 Lucas Oil Series race, was .020 or quicker on the starting line for all six rounds and a faced his own all-star cast that included Anthony Fetch and Super Gas winner Ed Alessi Jr. After the win, Bigley is now fourth in the Super Comp championship standings, just eight points in back of leader Luke Bogacki with the same number of events claimed. Moses is also lurking just outside the top ten. 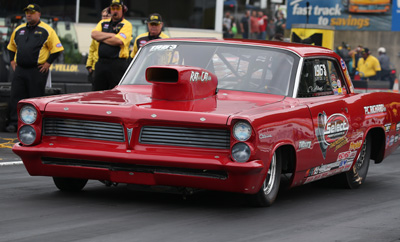 Nearly two decades after winning his first national event title at the 2001 Reading event, Ed Alessi Jr. returned to the winner’s circle in Super Gas with his unique Chevy-powered ’63 Pontiac Catalina. Alessi was nearly perfect off the starting line in the final with a .001 light to a .048 for his opponent and good friend, Jake Barbato. With room to maneuver at the finish line, Alessi turned on the win light with a 9.937. Alessi had a perfect .000 light in his quarterfinal win against Richard Grenier which set up a semifinal match against defending event winner Lauren Freer. That race also went to Alessi via a double-breakout, 9.874 to 9.872. Barbato, racing in his first national event of the season in Super Gas, stopped Lenard Marshall in round four to earn a bye into the final.