The Sports Report: A near miss and a father-son final 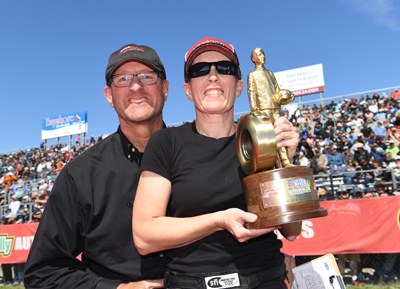 So far, there have been 24 drivers to double-up at an NHRA national event but surprisingly, none of them have been females. Mia Tedecso, Michelle Furr, Lauren Freer, and Brina Splingaire have come close, but that is one of the few barriers in NHRA Drag Racing that has yet to fall.

Cut to the NHRA SpringNationals in Houston and the star of the NHRA Lucas Oil Drag Racing Series was unquestionably Brenda Grubbs. A frequent contributor to the pages of NHRA National Dragster with her popular Travels with Brenda column, Grubbs entered Sunday’s final eliminations with a pair of red Camaros still alive in Super Stock and Stock.

Ultimately, Grubbs finished with a split that included a hard-fought win in Super Stock and a semifinal finish in Stock. As rewarding as it was to get her second national event win, Grubbs couldn’t help but think about the one that got away.

“We ran the semifinals of Stock and I was late, and I was so mad at myself, but my husband, Bill, came over and said, ‘That’s alright. Get over it. Let’s move on to the next one.’ That’s one thing I’ve learned to do is compartmentalize. I was able to do that, and we came away with our first win in Super Stock. I’m still a bit frustrated with myself because you don’t get these opportunities very often, and you want to make sure you capitalize on them. At least we came away with one win.”

Grubbs, who previously won the Stock title at the 2014 Denver event, wheeled her AA/SA ’69 Camaro to wins over David Latino and Paul Smith to earn a bye run into the semifinals where she met Tim Snively’s I/SA Camaro. The race basically ended on the starting line when Snively hammered the Tree with a .008 light and Grubbs had her worst light of the event with a .108.

“I just missed it,” she said. “No excuses. I just didn’t focus hard enough. As soon as I left the starting line, I knew I was in trouble, and after that, there was nothing I could do.”

With their Stocker parked, Brenda and Bill turned their attention to their Super Stock entry, another ’69 Camaro that competes in the quick SS/AA class. With elapsed times in the low nine-second zone, it has taken Grubbs a while to get used to the car, but she turned the corner in Houston with a strong performance that included a key quarterfinal win against perennial top-10 finisher Jimmy Hidalgo Jr. That battle was decided by .0019-second, and the reward was a bye run into Sunday’s final round. 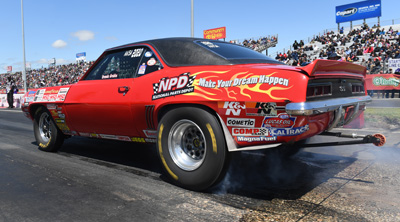 Putting aside her loss in Stock, Grubbs regrouped for the final against Craig Gualtiere, who recently won his first Lucas Oil Series event. Grubbs cut a competitive .014 light and scored a holeshot win with a 9.284 on her 9.26 dial to a .011-over 9.691 for Gualtiere’s clean SS/GA ’67 Nova.

“It would have been awesome to make history [as the first woman to double] but at the same time, we made Grubbs history by winning my first wally in Super Stock,” said Grubbs. “We’ve been building this car for seven years, and Bill has done an amazing job. Finally, at beginning of this year, I’ve felt that I was comfortable in this car. It’s fast, and it’s a different sensation than the Stocker that I’m used to driving. Stocker leaves with the front end high in the air but this [Super Stock car] has a feeling of immediate acceleration. It gets your attention.”

“Overall, I’m just really proud of what we’ve been able to do as a team,” Grubbs said. “None of this happens without Bill. He deserves so much of the credit. Also, I have a newfound respect for people who have doubled-up like [Dan] Fletcher. We know how hard it is to race two cars. It’s very humbling. I think that’s what I want to express the most. People were excited for us, and I’m excited to have a win and a semi. I can’t imagine what it’d be like to have two wins. I’d like to find out someday.”

The best of the rest: Thanks to his many friends in the South Central Division, Arkansas-based attorney Snively has been a part of numerous winner’s circle celebrations, but he was able to celebrate a win of his own in Houston after driving to the Stock title. One round after ending Brenda Grubbs’ hopes for a double, Snively wheeled his I/SA ’85 Camaro to a final-round win over Brandon Bakies. After an even start, Snively claimed a narrow win with an 11.745 on his 11.73 dial. Bakies, in his F/SA Olds, was close behind with an 11.091 on his 11.07 dial. The difference at the stripe was just four-thousandths of a second. On his way to the final round, Snively faced a tough roster of contenders, including Brett Candies, multitime JEGS Allstars champion Slate Cummings, two-time national champion Austin Williams, Mike McMahan, and Grubbs. He managed to leave first in every round except for the final, where he was just .002-second behind Bakies.

At the 1996 Houston event, Lyndon Rutland reached the final round of Super Comp, where he was turned back by Jeromy Hefler. It took more than a decade, but Rutland reached the Super Comp final again in 2018, and this time he closed the deal with a dynamic victory over two-time national champion Austin Williams. The final was easily one of the best races of the weekend, regardless of class. Rutland and Williams left as one with matching .018 reaction times, and Rutland put the nose of his M&M Race Cars dragster ahead at the stripe by an inch or so to take the win with an 8.901 to Williams’ 8.902. Ironically, Rutland’s top speed at the finish line was 180.07 mph while Williams braked to just 156.99 from his usual 170-mph pace.  Rutland came out swinging in eliminations with a .001 light in the opening round and later claimed wins against Tony Brown, Jay Bunce, Trene Cressonie, and Derek Denney. 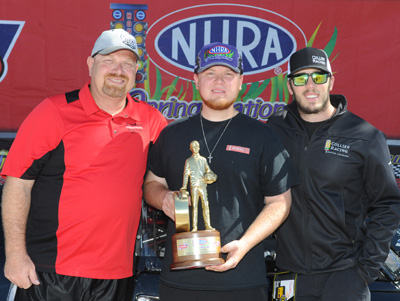 Super Gas finalists Steve and Koy Collier became the 11th different father-son duo to race in a national event final, joining a list that most recently includes fellow Division 4 racers Greg and Aaron Stanfield, who raced in the Super Stock final at the 2017 Chicago event. Coming off a bye run in the quarterfinals, Koy, 20, unleashed a perfect 9.900 run on Lloyd Parfait to reach the final round for the second time in his young career. His father Steve had already earned a semifinal bye after his quarterfinal win over James Carter, which guaranteed an all-Collier final. With family bragging rights on the line, Koy gained a small lead at the start and once again flirted with perfection with a 9.902 in his Camaro to beat Steve’s 9.890 breakout. In the 24 times that a father-son have raced in a final, including 13 by the Pro Stock duo of Warren and Kurt Johnson, the son has prevailed just 10 times.