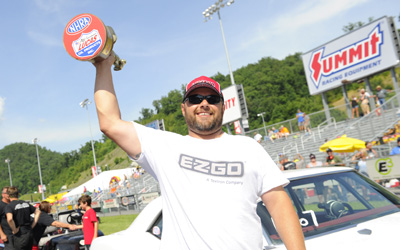 Ed Longhany Jr. earned his first-ever NHRA national event victory when he stopped perennial championship contender Joe Santangelo in the Stock final at the Fitzgerald USA NHRA Thunder Valley Nationals in Bristol. As excited as Longhany was to finally collect his first NHRA national event Wally, his finish line celebration was put on hold temporarily while he watched the Super Stock final, which featured his father, Ed Sr., and veteran Scott Stillings. Stillings prevailed after a close battle, but with a win and a runner-up, there was much for the Longhany family to celebrate.

“After I ran, I jumped out of the car at the scales and watched dad,” said Ed Jr., in an interview with the Fayetteville [N.C.] Observer. “I wish he could have won on Father’s Day. I had tears coming down my face. I think he was teared up for me winning. It was really emotional. I think we hugged each other. He said, 'Great job; and I said, ‘Happy Father’s Day.’”

The 2018 season has already had its share of ups and downs for the Longhany family. Ed Jr. had an encounter with the guardwall in Gainesville after his car launched into a towering wheelstand. Longhany wasn’t hurt but his car required extensive (and expensive) repairs.

Longhany returned to action a month later at the GALOT Motorsports Park Lucas Oil Series event but wasn’t able to get past the second round until Bristol, where he used a .008 reaction time to earn a win over Jeff Hairrington. Longhany also defeated his brother Jeff to earn a bye run in the quarterfinals.

“It was awesome,” Longhany Jr. said after the final round. “I had my kids there and my wife, Stephanie. She gave me a lottery ticket that she’d won $20 on. She said, ‘Put this in your car and you’re going to win the race.’”

When it came to driving prowess, the elder Longhany was also on top of his game in Bristol. Wheeling his SS/KA ’74 Duster, Longhany also defeated Joe Santangelo, and scored wins against four-time world champ Greg Stanfield, Mark Alvey, Mike Skinner, and Sterling Simmons to reach his first-career final round.

The best of the rest: Super Stock champion Stillings has terrorized the IHRA circuit for years but with the demise of class racing on that front, he’s returned to NHRA competition and grabbed his second national event win after defeating Longhany Sr. in the final. Stillings, in his SS/AM Grand Am, put together a .027 package in round two against former Mopar Hemi Challenge champ Lloyd Wofford, and battled to a narrow victory against Jeff Longhany in a race where the reaction times were .001 and .008, respectively. In the final round, Stillings finished the job with a .022 light and an 8.854 on his 8.84 dial to win for the first time since the 2006 Topeka race.

Second-generation racer Tyler Caheely defeated five-time national champ Edmond Richardson in the Bristol Super Comp final six years ago to win his first NHRA national event title. Caheely returned to the final in 2018 and once again, his opponent was a national champion. This time, Caheely faced Jacob Elrod and the end result was a typically close 8.928 to 8.930 battle that was decided by just six-thousandths of a second at the finish line. Caheely’s road to the final included an 8.908 win over Kathy Woeber in round three and a close double breakout win against Jonathan Anderson in the semifinals. 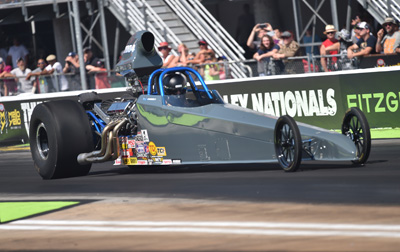 Multi-talented Steve Furr is a threat to win almost anywhere. but he seems to be at his best when racing in the valley that is Bristol Dragway. Now a seven-time NHRA national event champion, Furr’s last four wins have come in Bristol, including the Top Dragster win in 2016, and the Super Gas title (over Jacob Elrod), last year. Furr also won the 2012 Bristol race in Top Dragster. Coming off a bye run in the quarterfinals, Furr put down one of the best runs of his career in the semi’s with a .001 light and a 9.902 that left opponent Tommy Turner with virtually no options. Facing Ray Miller III in the final round, Furr was also strong with a 9.917 that trumped Miller’s 9.927.

Prodigy Aaron Stanfield was able to celebrate Father’s Day by handing his father, Greg, a trophy from Bristol for the second year in a row. Stanfield successfully defended his Top Dragster presented by Racing RVs.com title when he defeated Joe Fisher in the final. Stanfield saved his best for last with a .012 light and a 6.320 on his 6.32 dial that Fisher couldn’t match despite a competitive run. Stanfield’s other key round came in the opener, where he stopped two-time national champ Jeff Strickland. In addition to his win in Top Dragster, Stanfield also reached the quarterfinal round of the SAM Tech NHRA Factory Stock Showdown behind the wheel of Stephen Bell’s COPO Camaro. 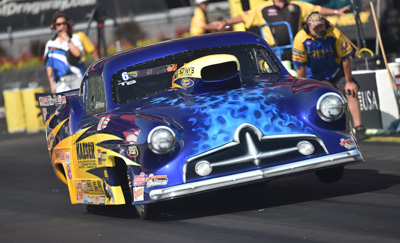 Jeff Brooks’ six-second Henry J is one of the most unique cars in the Top Sportsman presented by Racing RVs.com class, and it also happens to be one of the most competitive. The winner of the 2015 and 2017 Englishtown events, Brooks earned his third title following a close win over Elite Motorsports driver Royce Freeman. Brooks grabbed a slight lead at the start and held on for the win with a 6.720 on his 6.69 dial while Freeman broke out by seven-thousandths in his ’13 Camaro. Brooks earned his spot in the final after stopping Ronnie Proctor, who won the Amalie Motor Oil Gatornationals earlier this season. With the win, Brooks also took over the top spot in the battle for the Top Sportsman national championship.