A half-century ago, Al Joniec made history when he debuted the Ford Cobra Jet Mustang with a win in Pomona. That feat was repeated in 2009 by John Calvert in the new Cobra Jet.
07 Feb 2018
Kevin McKenna, NHRA National Dragster Senior Editor
The Sports Report 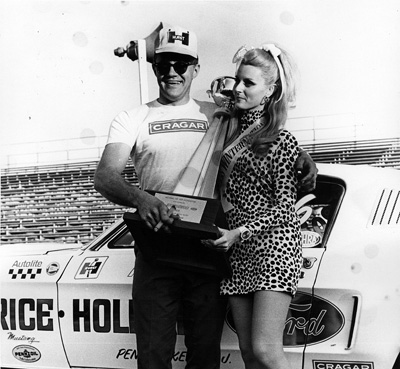 While we prepare for the official start of the 2018 season this week, let’s begin with a quick history lesson. In 1968, the factory muscle car wars were at the forefront of NHRA drag racing. Manufacturers were engaged in a constant battle of one-upmanship to produce the quickest and fastest production cars in the world and oftentimes, they pushed the limits of street ability in favor of straight-line performance. In February 1968, Ford Motor Company debuted its 428-cid Cobra Jet Mustangs at the season-opening NHRA Winternationals at what is now Auto Club Raceway Pomona. A total of four Cobra Jets participated in the ’68 race including Al Joniec, who drove his Rice-Holman entry to a stunning final round win over Dave Wren’s Max Wedge-powered Plymouth in the final round. Racing in the SS/E class, Joniec posted an 11.49 best at over 120-mph, outstanding numbers for a late 1960s Super Stock car. The other entries were driven by Hall of Famers Gas Ronda, Hubert Platt, and Randy Ritchey.

Joniec’s victory was impressive, not just because he was able to outrun the best teams of the day including factory drivers like Dick Landy and Ronnie Sox, but that he was able to do it with a car that was little more than a concept a few months earlier. Ford built just 50 of the special edition Cobra Jets in 1968, but reportedly, production didn’t begin until December 13, 1967, which left less than two months to prepare for the So Cal season-opener.

Original plans to use a 427-cid engine were scuttled and Ford opted to use the 428-cid engine first developed by Rhode Island-based Ford dealer Bob Tasca, the grandfather of current nitro Funny Car racer, Bob III.  The combination was (laughably) rated at 335-hp. A more reasonable number would likely have been in the 375-390 range. Ford lightened the Cobra Jets by excluding the radio, sound deadener, undercoating and heater. All 50 of the original Cobra Jets were painted in Wimbledon White with a black vinyl interior, and all of them were manually-shifted. 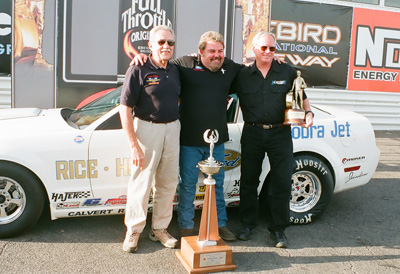 In the opinion of many, Joniec’s victory in Pomona represents the high-water mark for Ford in NHRA class racing, although a number of drivers including Tex Miller, Don Keen, John Calvert, and Jim Waldo, went on to win national championships driving vehicles with the Ford blue oval.

Fast forward four decades and the factory muscle car battles once again cranked up with the addition of special “package cars” from Ford, GM, and Dodge. First out of the box was an updated rendition of the Ford Cobra Jet, a supercharged monster that quickly rewrote the record books. Noted car collector Brent Hajek agreed to purchase the first ten Cobra Jets and brought four of them to the Pomona season-opener. As a tribute to the car’s heritage, Hajek lettered each car to represent the four Cobra Jets that debuted in 1968. He also hired veteran drivers including Calvert, Waldo, Jimmy Ronzello, and Gary Stinnett to drive them.

Ironically, the Al Joniec Rice-Holman tribute, driven by 1991 Stock national champ Calvert, went the distance to win the Stock Eliminator title. Although the final rounds were pushed to Wednesday due to rain, Calvert’s final round win against Division 6 racer Tommy Gaynor made major headlines throughout the sport.

“Ford Performance built the Cobra Jet in 2008 and we hustled to get the first four ready for the Winternationals in 2009,” Hajek recalled. “We lettered each car as a tribute to the four cars that ran at Pomona in ’68 and Calvert won in the Al Joniec-clone Mustang. It was amazing, you couldn’t have written a script better than that.” 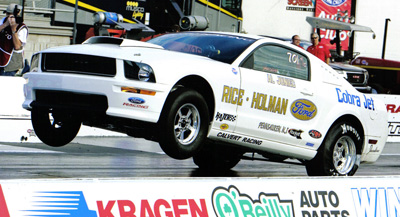 During this week’s Lucas Oil NHRA Winternationals presented by Protecttheharvest.com, Hajek will return to Pomona, and he plans to display all four of his Cobra Jet race cars, including the Calvert-driven Joniec-tribute entry that won a decade ago. The cars will be part of a celebration of the Cobra Jet’s 50th anniversary.

“We’re excited to be a part of the NHRA Winternationals and to give everyone a close-up look at four of our 2008 Cobra Jets, including the one John drove,” said Hajek. “We hope everyone comes by to take a look and get some pictures. We’re honored to display the cars.”

So, what are the odds that history will repeat itself for the third time?

It’s possible, but the rules for Stock and Super Stock have changed drastically since 1968. Calvert’s son, Brent, will be in action in Stock with the family’s 2014 model Cobra Jet and the husband and wife team of Rodger and Karen Comstock also race a pair of late-model Cobra Jet’s in Super Stock and Stock, respectively. The most intriguing entrant at this year’s Winternationals might be longtime Division 7 racer Richie Pauley, who owns one of the original 50 Cobra Jets built in 1968. Pauley continues to race the historic Ford even after most of the other Cobra Jets have found their way into the hands of high-end car collectors. It isn’t a stretch to think that Pauley’s car has made more passes down a dragstrip than the other 49 Cobra Jet’s combined.