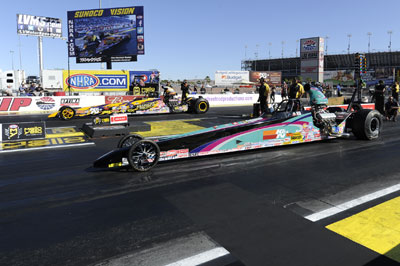 In the February 3, 2016, edition of The Sports Report, Dan Fletcher was asked specifically about the prospect of winning a race in Super Comp, one of the few things that had eluded him during his Hall of Fame career. Fletcher was not only confident but all but predicted when, where, and how he would finally break through for his first title in the 8.90 class.

“Oh, I’m gonna get a Super Comp win," Fletcher said. “I don’t get to race there very often, and when I do, it seems like the car I’m driving is having a bad day, but I’m not giving up. I’m going to run Super Comp at the spring Las Vegas race, so we’ll see what happens. I am definitely not afraid because you’re not going to convince me that Super Comp is any tougher than Stock.”

Almost on cue, Fletcher arrived in Las Vegas for the Denso Spark Plugs NHRA Nationals and drove Luke and Jessica Bogacki’s Super Comp dragster to the 96th victory of his career. Fletcher also joined the list of drivers who have won in five classes after victories in Comp, Super Stock, Stock, and Super Gas.

“This was absolutely one of my more fun and satisfying wins,” said Fletcher. “When I’m in my own cars, this is a business; I race for the money, and not much else matters. This time, it was more about the achievement. Like my kids would say, it was just about ‘turning on beacons.’ There was no pressure. It was racing the way it’s supposed to be.”

Several weeks ago, two-time national champ Bogacki and his wife, Jessica, offered to let Fletcher drive one of their dragsters in Las Vegas. Although he had plenty of other options, it didn’t take long for Fletcher to agree. Ultimately, the Bogacki-Fletcher partnership proved to be even greater than the sum of its parts. The combination of Fletcher’s driving skill and Bogacki’s well-prepared race car were enough to overcome the fact that Fletcher had never even seen the car before the start of the Las Vegas event on Friday. 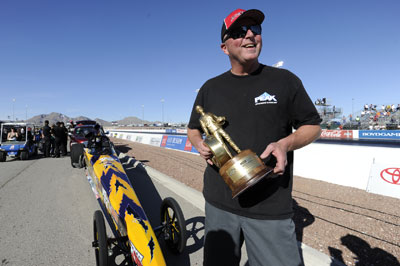 “I generally drive one of Dave Bridgewater’s [Super Stock or Stock] cars when I’m out in Las Vegas, but Luke asked, and he knew that I really wanted a shot at a Super Comp win,” said Fletcher. “I was really glad that Luke thought that much of me. The only problem with me and a dragster is that I’m 6-4, and I don’t really fit in anyone’s dragster. It’s like my friend Sal Biondo says, ‘I’m a little guy; I can fit in anyone’s car if you give me enough cushions.’ I don’t have that luxury. My left knee tends to want to hit the dash when I go for the brake pedal. We tried to move the pedal, but it was too much work, so I just dealt with it. Being in the car for a few minutes at a time, it wasn’t bad, though.”

Although Fletcher had never driven Bogacki’s dragster, it didn’t take him long to get comfortable. He cruised through eliminations, even scoring a crucial quarterfinal win over Bogacki with a .001 reaction time. In the final, Fletcher took advantage of a rare late light by Steve Williams, who has been one of the hottest Super-class racers on the West Coast for the past few years.

“This car repeated and did exactly what it was supposed to,” said Fletcher. “I don’t want this to come out the wrong way, but Super Comp racing is a Pro tree with a delay box. You have all the tools you need to be successful. It’s not Stock, where you need to master the footbrake. The other thing is that Luke is on top of his stuff; he has great equipment, and he takes care of it, and he does his homework. It’s a pleasure to race with someone like that. Every race that I won, I could have lost, but you’ve all heard me say this a million times: The luck went my way. This was just a really fun deal, and I’m glad I had the opportunity to do it. If the opportunity presented itself, I’d definitely be up for doing it again.”

For the record, Fletcher's 96 wins ties him with Pro Stock great Warren Johnson for third place on NHRA’s all-time wins list behind John Force and Frank Manzo. All of Johnson’s wins came in the Pro Stock class, and Fletcher now spread his out over five eliminators.

Run of the event: Division 6 racer Rob Blair qualified atop the 650-car Super Stock field with an impressive 8.318 on the 9.36 FSS/B index.

Race of the weekend: Top Sportsman driver Doug Crumlich did just about everything right in his semifinal race against Ed Olpin except turn on the win light. Crumlich was almost perfect off the starting line with a .007 light and barely missed his dial with a 7.329 on his 7.31, but Olpin was slightly better with a .003 light and a 7.149 on his 7.13 to win by just four-thousandths.

In case you missed it: While the Denso Spark Plugs NHRA Nationals was happening in Las Vegas, the Southeast Division was hosting a doubleheader NHRA Lucas Oil Drag Racing Series weekend at Atlanta Dragway. No one was able to double, but several drivers came close.

Van Puckett reached the final round of Comp in the first race before losing to Randy Daniels. He returned Sunday to seal the deal by beating Glen Treadwell in the final round. Super Stock racer Aaron Allison opened the event with a win over Marion Stephenson in race one, but his quest for a perfect weekend was halted in the final round of race two with a loss to Irvin Johns.

Super Street racer Leland Poppel also had a memorable weekend with a pair of runner-up finishes. Poppel lost in the final round of the first event when he fouled against Clarence Woodham, then dropped Sunday’s final against Jonathan Anderson on a breakout.