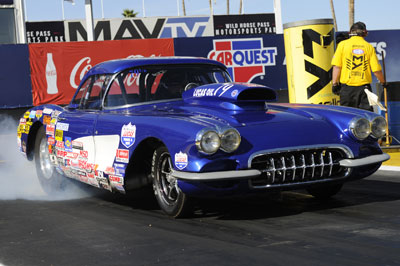 Brad Pierce’s ’58 Corvette is one of the coolest cars in Super Gas, but to be perfectly honest, it also happens to be one of the slowest. While Pierce has no problem running the 9.90 index, his trap speeds often hover in the high-130-mph range, which puts him well behind most of his competitors, who routinely stop the speed clocks with runs in the 160- to 170-mph range.

Before we dissect Pierce’s latest win, it’s worthwhile to explain why speed is so important in Super-class racing. Years ago, racers realized that using a timed throttle stop, they could easily and consistently adjust their cars to hit the target index of 8.90, 9.90, or 10.90 for Super Comp, Super Gas, or Super Street, respectively. They also realized that a high-horsepower engine combination allowed them to spend more time “on the stop” early in the run, which produced top speeds that were vastly disproportionate to elapsed times. Faster top speeds meant that slower opponents would take an early lead but would also have difficulty judging any car approaching quickly from behind. That strategy works well for many racers, but Pierce long ago decided that he wasn’t going to mortgage the farm just to do what everyone else was doing. To that end, he doesn’t seem to mind racing against cars that are often 20 to 30 or more mph faster at the finish line.

“I guess I’m just used to it,” he shrugs. “A lot of guys want to throw $100,000 into a car to make it go fast, but I can’t do that. I have to race within my means. I’ve learned to look over my shoulder. I’ve always raced that way. When I was younger, I did a lot of bracket racing, and I always admired the guys who could win with slower cars. Really, though, it just boils down to cutting a light and being able to run the number. Sometimes I think, ‘Would I be a better racer if I had a faster car?’ Maybe, but that’s not really an option for me.” 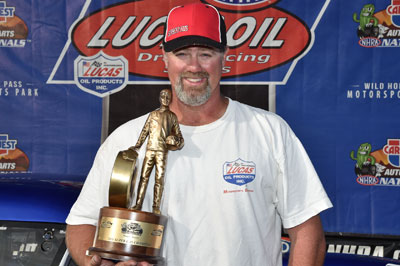 Pierce acknowledges that when racing a slower car, it is critical to gain a starting-line advantage, or at the very least, not surrender a big lead to an opponent. He worked that strategy to perfection in the second round in Phoenix, where he used a .006 light and a 9.93 to take a holeshot win over Ed Hutchinson, who trailed with a .027 light and a 9.927. The finish-line speeds were 136.84 for Pierce and 161.75 for Hutchinson.

“With a slower car, I have to dial honestly,” said Pierce, who is now a six-time national event winner, with three of those victories at Wild Horse Pass Motorsports Park. “I can go down there and hold more than about two-hundredths. That’s hard to do at a national event because there is so much time between rounds, and the weather can change drastically. That’s where the fast guys have an advantage. You just have to learn when to cut them loose and when to take the finish line. Really, you just need to put a package together and hope they can’t match it.”

Pierce also understands that after more than 5,000 runs, he’s very familiar with his Corvette, so he’s able to accurately predict its performance regardless of track and weather conditions. He bought the car more than 20 years ago as a basket case and did almost all of the work himself, including paint and bodywork.

“This car doesn’t have all the latest technology, but it’s a really good car,” Pierce said. “It’s not a roadster, but it has good visibility. I can see out of all the windows, and because I spend so much time looking over my shoulder, it also helps that my neck is pretty flexible. This car also weighs 2,700 pounds with me in it, so it’s about 300 to 400 pounds heavier than most Super Gas cars. That helps me because I get better traction than some of the high-horsepower cars. When we get on a hot track, some guys struggle, but I am usually pretty consistent.
I had thought about selling it to get a lighter car, but it’s a part of me now. I don’t think I could part with it. Someday I will take it apart and powdercoat all the parts and make it really nice, but for now, I’m just happy that I can still be competitive in it.” 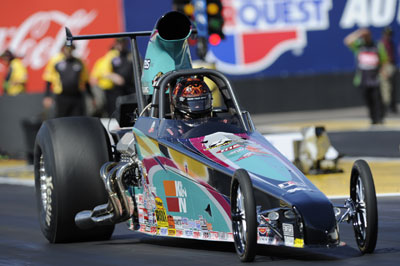 Another hot start: With a win, a runner-up, and a semifinal finish in two categories at the first two events of the season, Steve Williams is off to a fantastic start. Then again, he’s actually a bit behind last year’s pace. Thus far in 2016, Williams has been nearly unbeatable in Super Comp with a victory at the season-opening Circle K NHRA Winternationals and a runner-up finish at last weekend’s CARQUEST Auto Parts NHRA Nationals in Phoenix. In Super Gas, Williams has a semifinal finish in Phoenix to go with a third-round showing in Pomona.

Williams, well known as the vice president of K&N Engineering, enjoyed a similar hot start last season, when he drove to three final rounds at the first three races, including the Division 7 opener at Wild Horse Pass Motorsports Park. That event will be held next weekend, and Williams will have another opportunity to reach a final round or two.

Last season, Williams acknowledged that his hot start allowed him to dream of winning an NHRA Lucas Oil Drag Racing Series national championship, but he did not make it to another final round and ultimately missed the top 10 in both classes. As a testament to the competitive nature of NHRA Sportsman racing, Williams finished No. 17 in Super Comp and No. 18 in Super Gas.

In Phoenix, Williams scored a big semifinal win in Super Comp over Trevor Larson with a nearly perfect 8.901, then lost the final to Chandler Meziere when his K&N dragster slowed. In Super Gas, Williams broke out with a 9.886 in the semifinals against Clint Fishel’s 9.915 effort.

Run of the event: A handful of drivers were battling for the No. 1 qualifying spot in Top Dragster, including reigning Division 7 champ Jesse Adams, who secured the pole with a 6.001 in his supercharged entry. Because the class is limited to entries running 6.00 and slower, there was very little chance that Adams, who also exceeded 230 mph on the run, was going to get bumped from the top spot.

Race of the weekend: Normally, a .015-second package in a Super Stock car almost guarantees a win light, but Mike Loge proved to be the exception to the rule in Phoenix. After a .009 reaction time in round two, Loge drove his SS/LA Duster to an 11.116 on his 11.11 dial but watched as the win light came on for Jerry Hatch, who wheeled his SS/HA Challenger to a .008 light and a perfect 9.730 to win by a scant .007-second. Hatch had an outstanding weekend in Phoenix with a runner-up in Stock and a semifinal finish in Super Stock.

In case you missed it: Among the winners crowned at the season-opening Division 4 NHRA Lucas Oil Drag Racing Series event at Houston’s Royal Purple Raceway was Greg Stanfield. The part-time Pro Stock driver and engine builder drove his FS/D Challenger to a final-round victory over Bobby Brannon in Stock eliminator. Although he’s a four-time national champion in Super Stock, Stanfield hadn’t won a Lucas Oil Series event since the Royal Purple Raceway bash in 1997, and his last Stock eliminator win of any kind was in 1986 at the first Lucas Oil Series race held at the then-new Texas Motorplex.