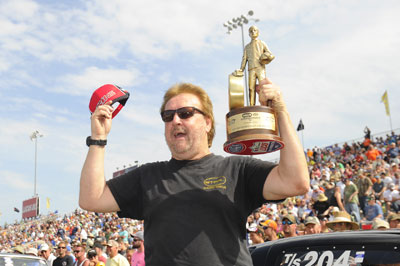 There are certain days in one’s life that aren’t easily forgotten, and for many drag racers, the day they first encountered Ronnie “the King” Davis counts as one of them. Davis, who passed away last weekend at the age of 66 from injuries suffered in a racing accident, was one of those rare individuals who left a lasting impression on just about everyone who met him.

Davis was vocal. Davis was opinionated. Davis was stubborn. He could be simultaneously friendly and frustrating, but those traits only helped to illustrate the deeply rooted passion he had for drag racing. Davis had an unwavering determination to not only be the best racer he could be, but to also better the sport he loved. Once you took the time to get to know him, it was hard not to like him.

You also didn’t need to see an entry list or qualifying sheet to know if Davis happened to be racing at a particular event. If you somehow missed his bright yellow Top Sportsman Corvette or the fleet of custom golf carts that surrounded his trailer, you couldn’t mistake his gravelly voice. Equal parts stand-up comic, politician, and carnival barker, Davis was apt to hold court wherever he happened to be. Political correctness may not have been his strong suit, but Davis always made sure his opinion was noted.

In the wake of Davis’ passing, many of his friends and fellow racers took to social media to offer condolences and share their memories. One of the most poignant tributes came from former Orlando Speed World Dragway track operator Carl Weisinger, who wrote:

“In this life, we get to meet some truly unique people. People that we can honestly say we never met anyone else quite like them. Some of you may know some of these names of folks that are unique in their own special and branded way. One of the guys that fell into the 'nobody else like ’em' category was Ronnie “the King” Davis. I first met Ronnie when he raced a 10.5 car at the World Street Nationals and some NHRA divisional races in Orlando. Ronnie was somewhat on the ‘intense’ side at the NHRA races. Problem at the gate with sponsor credentials? Ronnie Davis. Special situation with parking a Queen Mary-sized rig with room to display an acre of golf carts? Ronnie Davis. Division 2 director needs a few extra tickets for one of his sponsors? Ronnie Davis. Now, Ronnie was a results kind of guy. He didn't mind sitting at the gate and blocking traffic until his deal, whatever it was, got straightened out. Although his politics run away from Trump, Ronnie was a lot like him on his own level. He got things done.

We talked a few times a year, mostly about golf-cart stuff and ‘big-ass motorhomes,’ but, until today, I knew I could call him anytime and get his opinion. And he had plenty of them. RIP Ronnie. We liked you a lot better than you thought we did.” 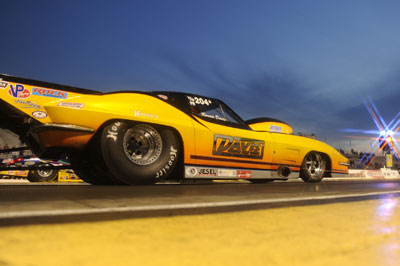 My own introduction to Davis came in the late 1980s when he was one of the early stars of the eighth-mile Southeast Division Super Quick Series. From the outset, Davis was anything but subtle, making a point early in our initial conversation to explain how his popular nickname, “the King” was not self-proclaimed, as many had assumed, but rather bestowed on him by competitors following a three-year unbeaten streak he had amassed racing throughout the Southeast.

“I call myself 'the King,' and you can feel free to use it anytime you write about me,” Davis said, adding, “Just so long as you know these guys [competitors] are the ones who gave it to me.”

In many ways, Davis was the king of Southern doorslammer racing, or at the very least one of its most successful racers. During his long career, he won countless Quick 8- and Quick 16-style heads-up races, and he was a five-time IHRA series champion, but he would likely agree that his most memorable and long-lasting contribution to the sport came when he spearheaded the effort to bring the popular Top Sportsman class to NHRA competition. Working alongside then-NHRA Division 2 Director Bill Holt, Davis not only helped to formalize rules and scheduling, but he also personally recruited many of his fellow Top Sportsman racers for the initial five-race pilot program, which was launched in the Southeast Division in 2002. Davis even put his money where his mouth was by sponsoring the Top Sportsman series through Davis In-Motion Satellite Systems, one of his successful business ventures.

With Davis as its most vocal supporter, it wasn’t surprising that Top Sportsman (and the equally popular Top Dragster class) were added to each of NHRA’s seven geographic divisions a few years later. In 2010, both classes were included as part of the JEGS Allstars program. Last year, Davis’ ultimate goal was fulfilled when NHRA Top Sportsman and Top Dragster national champions were crowned for the first time. Following his victory at the Amalie Motor Oil NHRA Gatornationals in 2015, Davis beamed like a proud parent when he reflected on the success of the program. 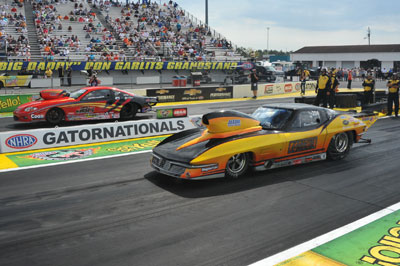 Current Southeast Division Director Rich Schaefer recalled how Davis welcomed him to the division and how he very quickly became a close confidant.

“Ironically, my first race as a division director was at Silver Dollar Raceway in 2010, and Ronnie won that race,” Schaefer recalled. “He was the first guy to pull me aside and talk to me about racing in the Southeast Division. Since I was fairly new to drag racing, he became something of a coach, and I knew I could go into his trailer anytime and strike up a conversation. Ronnie could be a pain in the butt, but in the Southeast Division, he was our pain in the butt, and we were lucky to have him.

“Ronnie had also told me that he’d sponsor the Top Sportsman class in Division 2 for as long as I’d let him, and he honored that commitment. His crowning achievement was definitely last year when we crowned national champions in Top Sportsman and Top Dragster for the first time. He was also happy to see [friend and fellow Division 2 racer] Jeffrey Barker win the first Top Sportsman championship. We’re all very sad to lose him, but Ronnie’s influence on the sport will be felt for many years to come.”