In the Nick of time 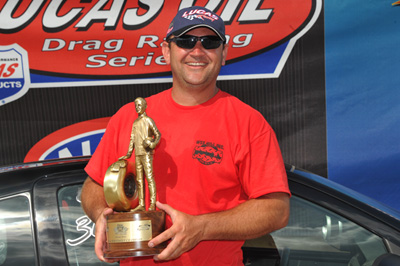 When he rolled through the gates of Silver Dollar Raceway for the recent Division 2 NHRA Lucas Oil Drag Racing Series event, Nick Folk had already done the math and quickly concluded that the odds were not in his favor, or so he thought. Racing at his final points-claiming event of the season, Folk believed that it was mathematically impossible for him to win the 2016 NHRA Lucas Oil Super Comp championship, but his friends quickly convinced him that was not the case.

“I have to be honest; I figured the points wrong, and I didn’t think I could win the [national championship],” said Folk. “The only reason we went to Reynolds [Ga.] was to make sure that I could win the [Division 5 title]. I also figured that if I won in Super Stock, I could finish second in the national standings, and that’s worth $5,000. Once we got there, Ray Connolly said to me, ‘No, you are wrong; you can still win the world [title], but you have to win the race.’ Then Jeff Strickland agreed with him and said, ‘Yes, you can still win it, dummy.’ Needless to say, I was pleasantly surprised to know I still had a shot at it.”

The rest, as they say, is history. In a situation where nothing less than a victory would help better his score, Folk won six tough rounds, including a come-from-behind final against Gene Quinn. Folk hasn’t officially locked up the title, but with a robust score of 652 points, he is the leader in the clubhouse, and it’s going to take a strong effort for anyone to overtake him.

“Once I found out I could still win the championship, it’s not like I tried any harder or changed anything,” Folk said. “I don’t care if I’m racing at my local track for $1,000 or in the final of the Million Dollar race, I’m always going to try my best to win regardless. I did get a little nervous when we got to the final because then I knew what was at stake. I’ve been in a lot of pressure situations over the years, so I was OK with it. When we got to the final round, I knew the coin toss [for lane choice] was going to mean a lot. The way the sun sets at that track, you can’t see the Tree very well in the late afternoon. I lost the coin toss and lost lane choice, and I was .030 on the Tree in the biggest round of my NHRA career. Somehow, I still figured out how to turn on the win light. The older you get, the more you seem to understand how to handle those situations, but then again, after the win light came on, I almost forgot to shut the car off. I’m sure the crew at the top end could hear me yelling.” 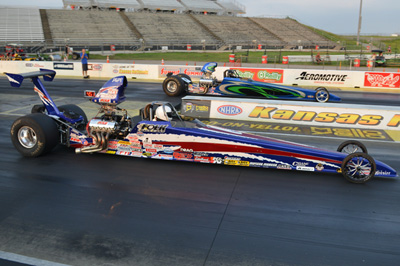 Folk, who races as part of a family effort with his parents, Ron and Vicky, and his older brother, Brian, is a bracket racer at heart. Although Ron, Brian, and Nick all have multiple NHRA national event wins to their credit, their bread and butter is big-money bracket racing. This year, however, the Folks decided to add more events to their NHRA schedule, and so far, it is a decision that has paid dividends.

“This spring, we decided to run about 14 NHRA races just to see how it played out,” said Folk. “We just never really focused on winning an NHRA championship, but that’s something that is on everyone’s bucket list. How could it not be? I mean, look at the drivers who have won the Super Comp championship in the last five years -- guys like Luke Bogacki, Kevin Brannon, and Edmond Richardson -- they are all bracket racers at heart. Who wouldn’t want to be included in that group?”

Folk’s season got off to a solid start when he reached the final round of the JEGS NHRA SPORTSnationals in Bowling Green, Ky., but his championship hopes zoomed a few weeks later at Heartland Park Topeka when he won both events in the doubleheader weekend. As an added bonus, there were more than 128 cars in the Super Comp field in Topeka, which meant that Folk added 230 points to his score after winning 16 straight rounds.

“I went to Chicago for the national event and went to the fifth round in Super Comp, and then we went to Topeka and that happened,” Folk said. “Topeka was one of those races where nobody was really consistent. The wind was blowing, and a lot of racers were having trouble being consistent. That sort of situation falls right into my hands. I feel like I’m a lot more dangerous in that spot. Where I struggle are those races where the weather doesn’t change and people can just run 8.90 at will. I like to improvise. I like to drive the finish line. That was my kind of race. To be honest, I didn’t do anything different for that race, and I won 16 rounds. It’s not like I was attempting to drive differently. I had the same car, the same engine, and the same setup I always use.” 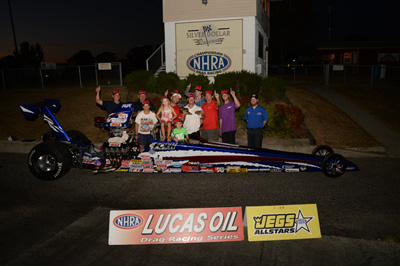 Folk was riding high after his Topeka double, but the feeling didn’t last long. At his next five events, Folk won just one round and firmly believed that his chances for the title had fallen by the wayside. He hit rock bottom after towing from his home in Durand, Ill., to Reading for the Dodge NHRA Nationals and suffered another early loss.

“First we went to Brainerd, and I had a guy throw a perfect .000 light against me, and it spiraled out of control from there,” Folk said. “Then we went to Earlville [Iowa] for the Division 5 race, and Bob Fuller was .00 and 8.91 against me, and I had no chance. Going to Reading was a bad idea. We almost gave up after that. We left home on Tuesday and because of the rain didn’t make a run until Sunday night. On Monday, I was .009 on the Tree, and lost a double breakout. We were all down in the dumps after that, especially after being there almost a week.”

Folk won’t know for perhaps another week or two if he’s going to need to book a flight to California and rent a tux for the Lucas Oil championship banquet in Los Angeles. He’s keeping a close eye on Steve Williams, Trevor Larson, and Christopher Dodd, the drivers who have the best shot to overtake him. Folk briefly considered going to the final events in Las Vegas and Pomona to act as a blocker, but after a long season, he opted to spend the off weeks with his family.

“The next three weeks are going to drive me insane,” Folk said. “At this point, it is out of my hands; there is nothing I can do. I have a couple of buddies that are going out West, and I hope they can take care of some business for me. Since I’m a Folk, and nothing seems to ever come easy for us, I’m sure that Larson or Williams or Dodd will win [the NHRA Toyota Nationals], and I’ll have to sweat this to the end. I wouldn’t expect anything less. I just hope it holds out.

“If I do hang on and win this thing, it will be big for us, but I’ll be especially happy for my dad. I think he wants it more than any of us. Four years ago, we had a fire and lost our entire operation -- our truck, trailer, and all our race cars. The only thing we brought home from the entire rig was my mother’s kitchen bowl. At that point, we contemplated just buying a couple of bracket cars and racing locally, but that’s just not us. We’re too stubborn. We had to get back out on the road, and now we’ve got a chance to do something that everyone dreams about. I didn’t know if I’d ever have a chance to win an NHRA championship, but now that we’re this close, I hope we can hold on and finish it.”