Making each and every day count 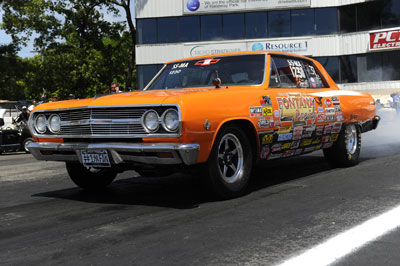 Winning is defined in many ways, and oftentimes, the biggest winners at any given event are not necessarily the drivers who hoist the coveted Wallys at the end of the day. Officially, William Kennedy won the Super Stock title at the recent NHRA Summernationals at Old Bridge Township Raceway Park in Englishtown, but as far as James Fontana is concerned, the win goes to his father, Jim, simply because he was there to enjoy another racing weekend surrounded by family and friends.

The ’65 Chevelle that the Fontana family races has been a familiar sight at Division 1 races for decades. Jim raced the car for the better part of 30 years, then handed down the classic Chevy to James shortly after he turned 16. Despite his best efforts, Jim never won an NHRA national event Wally, but he did earn a pair of runner-up finishes and scored a couple of wins on the IHRA circuit. That motivated James to get a long-overdue victory for the family.

“To hand over the driver responsibilities to me for the NHRA events was bittersweet for my dad,” said James. “Not winning [an NHRA race] was indeed hard for him to swallow after many years of dedication and determination, but allowing me to take over was a more enjoyable moment for him. I had won two bracket races before entering the NHRA circuit and had earned my wings, so to speak. After a couple near wins at [NHRA Lucas Oil Drag Racing Series events] and multiple fifth-round losses at nationals, I could feel myself getting closer to a win in the NHRA.” 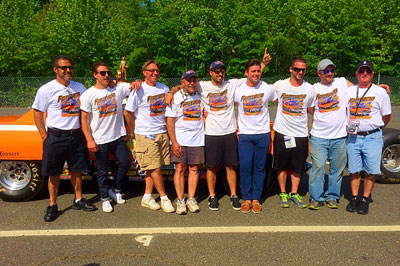 James finally scored a national event title in 2014, when he defeated Marty Rinehart in the Englishtown Super Stock final, and it remains the highlight of his drag racing career. As much as the win meant to James, he quickly realized that it was even more meaningful to his father.

“In 2014, three weeks before my first race of the year [the Maple Grove Raceway Lucas Oil Series event], I graduated from college with my dad at my side,” James said. “Unfortunately, I went red by -.003 at Maple Grove. Thanks to the calmness of my father, which anyone who knows him would agree, I was able to shake it off and move on. Our next race was Englishtown, and to make a long story short, I battled through seven rounds to claim my first national event win. Although the best moment of my life, this was a moment that changed my father's life forever. He’d waited for this his entire life. I don't think a day goes by still that my dad doesn't think about it. I know he has had a lot of wonderful memories, but if you were to ask my father what his best day was, I know for a fact that our win in E-town win would be it.”

James enjoyed his best season to date in 2014, and he finished the year on a high note by marrying his girlfriend of 10 years, Laura Bruzzo. Naturally, he chose his father to be his best man. 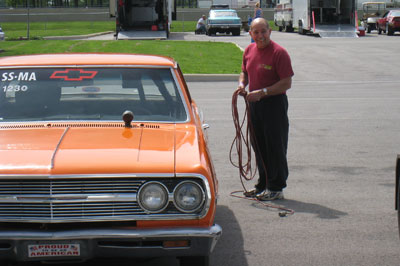 “For my father and me, 2014 was an incomparable season,” James noted. “Fast-forward through 2015: Racing is over, the wedding is over, and I thought that I could never be happier, but life changes. In December 2015, my father went into the hospital with pneumonia, only to discover that he had multiple myeloma and amyloidosis. Myeloma is a rare bone cancer, and amyloidosis is a secondary blood disease created by the bone cancer. [Doctors] believe it was brought on by Agent Orange, from the time my father spent in the infantry in Vietnam.

“Our family went from a life high to devastated in a very short time. I began to think that all of the things we had done together and accomplished were all supposed to happen for him, and I became angry and questioned myself daily. Months of treatment went by, only to send him back to the hospital with lung complications from the chemo. It was said by the oncologist after a 16-day hospital stay that they could no longer treat him and that he had six months to live. Again, it was more devastation for us. Trying to stay positive became even more difficult.”

Faced with some of the worst news imaginable, James quickly realized that the best medicine possible would be getting his father well enough to travel to the races. He also understood that nothing would provide comfort more than a chance to return to Englishtown, the site of one of the family’s most treasured moments just two years earlier. 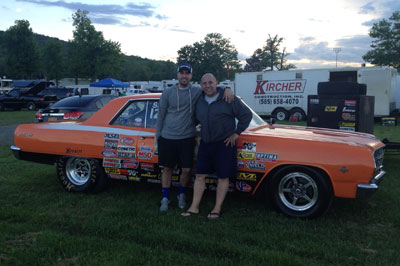 “After a while, my dad started feeling better emotionally and physically, and seeing the VA oncology of Western New York, they were optimistic of additional treatments and his timeline,” James said. “We are all staying positive together, but we knew we had to get him to the track to see the Chevelle race and to see his closest friends that have been in contact with him since his diagnosis. He missed the first couple races, but he built up his strength and traveled 400 miles to the Summernationals.”

Jim not only made it to Englishtown, but he was able to take up his familiar spot on the starting line, guiding his son and their familiar orange Chevy through the burnout and staging procedure.

“To see him on the starting line spotting me in the water was an extremely emotional moment for me when I rolled into the water box,” James said. “It’s a good thing I had a full-face helmet on. We threw him a big birthday party with all his friends and family there. How convenient was it that his birthday fell on Friday in Englishtown? It was an emotional weekend, but you couldn't slap the smile off his face. I didn't win it this year, but I had the same amazing feeling inside just as I did back in 2014 because it was a win for him.”

In a perfect world, James would have won his second Englishtown Super Stock title, but his chances for a storybook finish ended with a breakout in round two. Regardless, the family left Englishtown feeling like champions. Jim continues to fight the good fight each day, and Lord willing, he’s planning to attend the Division 1 Lucas Oil Series event at Cecil County Dragway in August. As for James, he remains grateful for each and every day he gets to spend with his father, especially for the time they have spent together at the racetrack.