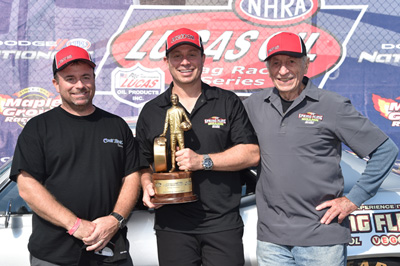 There shouldn’t be a whole lot of debate about this, so I’ll just come right out and say it: Peter Biondo is the greatest Sportsman racer in the 60-plus-year history of the National Hot Rod Association. OK, I’m sure some folks would love to contest the issue, and I’d allow that one could certainly make a case for Dan Fletcher, David Rampy, Edmond and Scotty Richardson, Gary Stinnett, Jeff Taylor, or a few other multitime national champions, but given his entire body of work, which includes seven national championships, it’s hard for anyone to argue against Biondo’s greatness. Even Fletcher, who has nearly twice as many national event wins as Biondo, acknowledges that “the Terminator” is the toughest racer he has ever competed against. When the question is posed personally, the ever-humble Biondo is naturally a bit more reserved.

“I don’t know about that; I don’t really think I’m the best at anything, but I’m flattered that some people might think so,” Biondo said. “Fifty wins is a big deal, though. I haven’t raced a lot of NHRA races in the last couple of years, so it probably got built up a bit more than it should have been. I will say that I’ve come to appreciate what that number means. The first decade that I raced, when I was younger, I was just going through the motions, and I’m not sure I appreciated what was going on. I don’t think I appreciated [success] as much as I do now.”

“The Terminator” chalked up his milestone victory Monday at Maple Grove Raceway when he won the Stock title over another past national champion, Michael Iacono. Biondo became the 17th driver to accomplish that feat and just the third to do it as a Sportsman racer, joining Fletcher and Rampy. Biondo, however, is different than Fletcher and Rampy because he’s not what one would call a touring pro, so he doesn’t historically race at 18 to 22 national events each season. Otherwise, he probably would have gotten to 50 wins much sooner, and his total might be much higher. Not surprisingly, Biondo doesn’t spend much time pondering his win totals or his place in history. 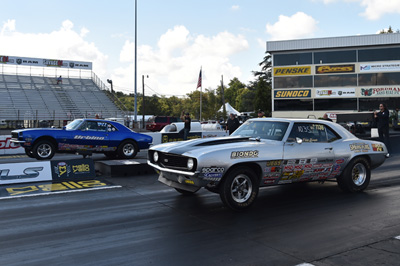 “This weekend, after I got No. 50, I realized how hard it is to win even one event,” Biondo said. “I watched [fellow Reading champs] Craig Porter and Amanda Boicesco win their first races, and I saw how excited they were. That makes me appreciate all the success I’ve had. I can say that it’s much harder to win now; maybe not harder, but it’s definitely different if that makes any sense. Back in the 1990s, cars were not as consistent as they are today. There is actually a bit less finish-line driving now than there was 20 years ago. Years ago, if you could grab a few [hundredths] on the starting line and take the stripe, the race was over. Now, everyone has great cars and great equipment to read the weather, and they know what their opponent is capable of. More people have caught on, so you need to look for your advantage in other areas. You need to learn to play to your strengths.”

It is fitting that Biondo’s 50th win came at Maple Grove Raceway because he has enjoyed tremendous success there and considers it one of his favorite tracks. Because the race is also close to his New York home, he was able to share the victory with his father, Sam, and older brother, Sal.

“I won the High School Challenge here [in Reading] when I was 15, so this place does have a lot of great memories,” said Biondo, who also has seven national event wins at scenic Maple Grove Raceway. “I would say that every track has its own nuances, but this place has some very different patterns. There are rounds where the weather [gauges] shows one thing and the time slip shows another. That certainly helps a guy like me who gets to race here fairly often. When I come here, I put a lot of faith in my finish-line driving because you can’t always rely on the car. It’s tricky.” 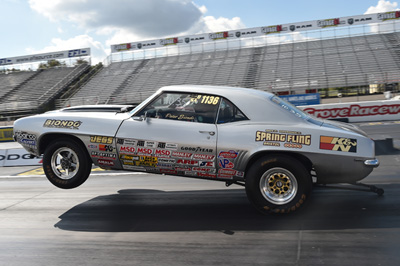 During the Dodge NHRA Nationals, Biondo set the stage for his historic win early with reaction times of .003 on his only qualifying run and .004 in the first round. He made his way through eliminations to face Iacono in the final but almost gave away the victory with a late .057 light. Biondo won by driving his ’69 Camaro to a 10.352 on his 10.35 dial while Iacono, who went on to win the Super Stock crown, just missed his first double with a two-hundredths breakout.

“I dropped the ball in the final,” Biondo noted. “I can’t explain what happened; the light was on, but I had a little hesitation. I knew immediately that I was late, and I was very disappointed in myself going down the track. Fortunately, I played it right at the top end. I was set up for a .010 to .012 light and missed it completely. This is my last [NHRA race] for the season, and that would have been a tough one to stew on all winter if I hadn’t been able to recover.”

Though he realizes that he likely might never join Fletcher and Rampy in the quest for 100 wins, he has no plans to stop racing anytime soon. With his 50th win safely in the bank, Biondo looks ahead to his next challenge, which is joining Jeg Coughlin Jr. by winning a national event in a seventh class. Biondo has already won in Comp, Super Stock, Stock, Super Comp, Super Gas, and Super Street. This year, he has also come close on several occasions to a win in Top Dragster.

“To win in seven categories would be cool,” he said. “I’ve already come close a few times, and it won’t be easy, but that’s definitely on my to-do list. Beyond that, I’m already thinking about watching my son, Saverio, go down the track in a Jr. Dragster in a few years. He’s all about racing; he loves to see my car do wheelies. Those are the things I’m looking forward to now.”