The Sports Report: Once is nice, three times is better

Craig Bourgeois was just one round away from a historic double-up in Comp Eliminator, but Jason Coan had other ideas. Bourgeois, well-known throughout the sport for his unique front-engine A/Nostalgia Dragster and 2016 world title, won the JEGS Allstars title at Indy on Saturday and then returned a day later to reach the final round of the Denso Spark Plugs NHRA U.S. Nationals but his chances for a double were dashed by the combination of a late light and a stiff CIC penalty incurred earlier in the race.

Bourgeois had already been penalized .15-second in index when he staged against Coan in the final round. Coan, carrying just four-hundredths in CIC penalties with his G/Econo Altered ’32 Bantam, appeared to have the upper hand and his odds for victory improved greatly when he left with a clean .042 light to Bourgeois’ tardy .223. Coan wasn’t about to take chances. He never looked back and turned on the win light with an 8.140 on his 8.68 index.

Coan is now a six-time national event winner and half of them have come at Indy. He also won U.S. Nationals titles in 2007 and 2013. Ironically, his other three wins have all come in JEGS SPORTSnationals races. He was also a runner-up at Indy in 2016 so he clearly does some of his best work at Lucas Oil Raceway. No matter how many times he wins NHRA’s marquee event, the thrill of victory never gets old.

“This really was special. I probably celebrated more inside the car than I usually would,” said Coan. “When the win light came on, I said to myself I really cannot believe this is three Indy wins. It was a marathon day and a late-night final which is a bit unusual for us. This is also only the second race we’ve been to this year so to be successful was pretty special.

Coan’s racing outfit is relatively small, and it’s very much a family operation. At most events, it’s just Jason and his father, Dave, although wife, Shay, and kids, Macy, Marly, and Jaxon sometimes join in. Indy was a “boy’s weekend with Dave, Jason, and Jaxon all pitching into service the car between rounds. At Indy, servicing the car also meant changing camshafts midway through the event.

“We left [the Division 3 Lucas Oil Series event] Bowling Green scratching our heads; we didn’t’ have the best weekend and the first run at Indy was not really representative of our true car,” said Coan. “We changed camshafts  as an experiment and did a few other things to get back to where we used to be. That helped me mentally and also helped the car.

Coan’s first two opponents fouled, which is huge in Comp because it prevented a CIC penalty, but that doesn’t mean his path to the final was easy. He did take a four-hundredths hit in a quarterfinal race against Scott McClay, but that win set up a bye run in the quarterfinals, followed by a semifinal win against another former Indy winner, Todd Frantz. 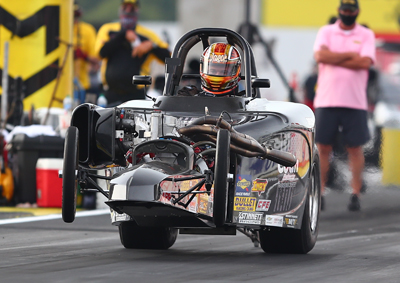 “After the first two rounds, I did feel like I had a good shot. I saw ladder shaping up at that point did feel like I had an opportunity,” Coan said. “Against Scott McClay I hogged up the [finish line] stripe and lost four. Earlier, Greg Kamplain red-lighted, and I never expected that. I also had the low qualifier [Travis Gusso] on my side of the ladder and he took himself out with a red-light. That’s why I say things just sort of fell together.”

For most Comp drivers, particularly those who block out the top two bulbs of the Christmas Tree, nighttime rounds are a challenge and both Coan and Bourgeois used blockers to help their reaction times. In their Indy final, Coan managed to get away cleanly with a.042 light while Bourgeos did not.

“This final was a reversal of the Bowling Green [JEGS SPORTSnationals] final in 2016 where I missed it against Craig,” said Coan. “It’s just hard to drive with a blinder at night. Somehow, I managed to have a decent light. I don’t know how much he had left but I thought we were in for a good race. As for performance, it’s the Indy final so you pretty much use all you have.”

During the week, the Coan family operates Coan Engineering, a successful torque converter and transmission business that provides driveline parts for a variety of applications from drag racing to monster trucks. Coan also builds his own engines, although the four-cylinder powerplant he used to win Indy was assembled by four-time Super Comp champ Gary Stinnett.

“We always put our own engines together but this time, Gary did it,” Coan said. “He’s always done our machine work, but it never hurts to have a different set of eyes look at what you’re doing. We’re also faithful to Carl Foltz and Scott at CFE and John Partridge at Bullet Cams as well as Kenny House, who did all the chassis work on our car over the winter to bring it up to current specs. Of course, I couldn’t do this without my dad and my wife, Shay, who stays so busy with the kids.

“When you win a race like this, you want to get back out there; I’d love to go racing again this weekend but reality sets in as soon as the motorhome hits the driveway on Monday morning. I’d love to race a little more because I think I could become a better finish line driver. We definitely have a car that runs well. Dad and I were talking and I do think we’re going to shoot for the St. Louis national event. We’d love to keep going.

The best of the rest: The Texas-based Emmons brothers have now combined to win 43 NHRA national events after Terry Emmons won in Super Stock and his identical triplet brother Jerry won in Stock. Terry has chipped in with seven of those wins after beating Dan Fletcher in the final round. Emmons, in his Protect the Harvest entry, won the double-breakout battle with a 9.08 on his 9.10 dial to Fletcher’s 9.73 on a 9.77 prediction. Emmons reached the final with late wins against Alan Wade and Kent Hanley while Fletcher beat Kara Forbes to advance to his 157th career final round.

Jerry Emmons won his first national event at the Denso U.S. Nationals in 1994 and he’s since gone on to win 15 times in his career. Emmons added a 16th win when in Indy when he earned the Stock title, celebrating alongside his brother, Terry, the Super Stock champ. Jerry saved his best performance for last when he cut a .001 light in the final and ran a 10.49 on his 10.44 dial to stop fellow Division 4 racer Parker DeVore, who was coming off an impressive win at the Division 3 race in Indianapolis last month. Emmons survived a number of tough races in eliminations including a second-round battle against five-time world champ Justin Lamb. Emmons also overcame Houston Raikes .001 light two rounds later.

Troy Williams Jr. is well known as one of the sport’s most successful high stakes E.T. bracket racers with a resumé that includes a pair of Million Dollar Race wins. Williams can now add the title of U.S. Nationals Super Comp champion following his final round win against Jerron Settles at Indy. Williams, in his FTI Converters entry, pulled back to an 8.949 in the final, letting Settles cross the finish line first with an 8.899 breakout. Williams added victories against Kris Whitfield and 104-time national event winner Dan Fletcher during the eight-round elimination battle. The Indy win came at a perfect time for Williams who is also in pursuit of the national championship in the Super Comp class. Williams is the leader by a sizable margin over former Super Gas champ John Labbous Jr.

Add Ray Sawyer’s name to the shortlist of drivers who have won both a world championship and a U.S. Nationals title after the Division 1 ace claimed the Super Gas title. Sawyer, who also competed in the JEGS Allstars race, navigated a field of more than 100 cars to win his eighth-career national event title. Sawyer faced fellow world champ Jacob Elron in the final and won the double-breakout race, 9.890 to 9.883. Sawyer also drove his Camaro to an impressive round two win over Jay Bunch where he delivered a nearly unbeatable performance with a .008 light and a 9.905. Sawyer also had a .006 light in his semifinal win over Chris Hess. The Super Gas class also featured a rare perfect run by Tim Gillespie who used a .000/9.900 combo in his round three race against Bill Jackson.

Raymond Miller is not only the first Super Street winner at the Denso NHRA U.S. Nationals. There is also a good chance that the Mansfield, Ohio, racer will be the only Indy Super Street champ. The 10.90 class was added to the Indy roster in conjunction with the JEGS Allstars race and it remains to be seen if it will be included going forward. Miller, in his Chevy Monza, was nearly untouchable in the final with a .004 light and a 10.905 to top Mark Smith in what was almost certainly the biggest race of his career. Miller’s driving was on-point all week with strong runs against division champs and JEGS Allstars competitors including Ray Dew, Phil Smida, and Kris Thies.

A year after winning the world championship in the Vortech Superchargers Top Dragster class, Danny Nelson is now a U.S. Nationals winner following his final round win against JB Strasseweg. The final was over early after Strassweg, a member of the Division 3 JEGS Allstars squad, fouled by two-thousandths. Nelson is one of several racers who elected to go with the 6.10 minimum dial-in for the majority of the event, although he made his way through Sunday’s late rounds with a 6.14 dial in the quarterfinals against Patrick Forster and a 6.16 in his double breakout against Darian Boesch in the semifinals. For the second-straight year, Top Dragster proved to be a great addition to the Indy show with all 32 qualifiers between 6.10 and 6.27.

Two years after winning his first two national event titles in Norwalk and Topeka, Dusty Meyer added a third when he drove to the win in Top Sportsman presented by Vortech Superchargers. Driving his six-second Chevy S-10, Meyer downed Jeff Brooks and Darian Boesch to reach the final where opponent Chad Pekrul left too soon by five-thousandths and triggered a red-light start. Meyer’s best performance of the weekend came against Boesch when he coupled a .014 light and a 6.729 on his 6.72 dial. Boesch, a semifinalist in both Top Sportsman and Top Dragster, missed his shot for a win when he broke out by seven thousandths.