Stereotypes and urban myths be damned, Kunkel pulled off a feat that many would consider nearly impossible when he won both ends of the Division 5 double-header at Heartland Motorsports Park. Kunkel left Topeka with a pair of Super Comp Wallys after reeling off 15-straight round wins. And the best part? He wasn’t driving a 180-mph dragster but rather a ’93 Chevy Lumina that never once cracked the 130-mph mark. The low-speed approach is nothing new in NHRA super-class racing. Chris Garretson and Tim Nicholson have both used that strategy effectively and have multiple wins and top ten finishes to prove it. Kunkel decided to join the fun this year. 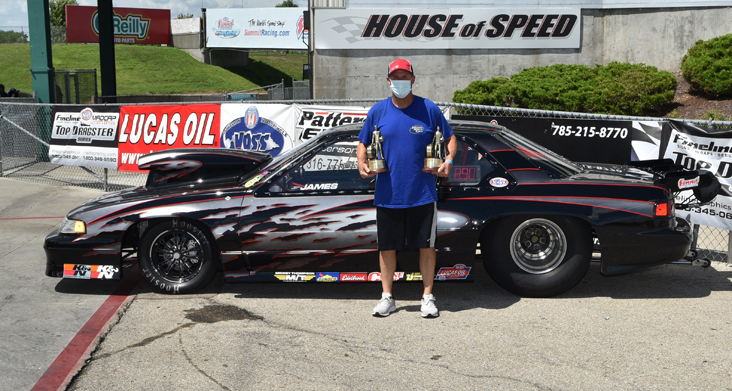 “This was pretty much not what I expected,” said Kunkel. “I mean, how many times does anyone go out and win two races like that? I know it happens, but you wonder if it will ever happen to you. I guess you just have to be in the right place at the right time, Actually, this car was more of an experiment than anything. I bought it out of Alabama about a year ago and it’s a really good eighth-mile bracket car. It’s super consistent and I started to think, well maybe it will work in Super Comp. Tim Nicholson is a good friend of mine and I’ve seen what he’s done in Super Gas [with a 100-mph Camaro]. I talked to Tim and he gave me some advice. We just set it up with a reverse throttle stop. This is the first time I’ve tried it and you see how it turned out."

A reverse throttle stop differs from a conventional stop in that the timers are set to close the throttle near the finish line rather than just off the starting line with a conventional throttle stop. As a result, the car is coasting across the finish line at a very low speed. In Kunkel's case, that was around 127-128-mph in a class where 175-mph speeds are routine. That dramatic speed difference makes it very difficult for an opponent to judge the finish line. Setting the car up was fairly straightforward, and Kunkel admits that the biggest adjustment was actually to his driving style.

“I like to think I’m fairly aggressive when it comes to finish line driving but all that goes out the window with this set-up because you can’t race the finish line,” he said. “You’re getting chased on every run and these guys are 40, 50, sometimes 60-mph faster than you so you just hold it to the floor and hope you’re not going under the index. You can control your E.T. some by shift points, but otherwise, you just watch the wind and the weather really closely to make sure you’re above the index.”

The Topeka double-header has become one of the signature events in the Lucas Oil Drag Racing Series with huge fields in nearly every sportsman class. That’s especially true in Super Comp where a contingent of well over 100 hopefuls makes for a long haul towards the winner’s circle. Undeterred by his new and unfamiliar combination, Kunkel went to work during Friday’s opening event and when he reached the final round, his opponent was Gary Stinnett, perhaps the most feared driver in the history of the class. Not only does Stinnett have four world championships to his credit, but his dragster also runs close to 190-mph, making it one of the fastest cars in Super Comp. 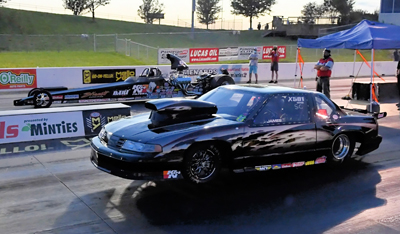 “Go figure,” Kunkel said with a laugh. “I get all the way to the final and I’ve got Gary Stinnett, maybe the best guy to ever 8.90 race and he’s running 190-mph. Actually, the speed didn’t matter so much in that final because we were both flat out and we both ran above the index. I just got there first by two-thousandths. That was just a really good, close race but there were a couple of other rounds where maybe I gave up a little on the starting line and [my opponent] just made a mistake trying to judge me. I ran [Division 5 champion] Trevor Larson in one round and I’m pretty sure if my car ran 160-mph, he would have won because he had me on the Tree.”

Kunkel is a six-time national event champion with titles in Super Stock, Super Gas, and Super Street, so he’s obviously quite versatile. Kunkel is also a perfect 6-0 in national event final rounds so once he gets close to the money, there’s a strong chance he’ll finish the job. Once he defeated Stinnett in Friday’s final round, his confidence was brimming as he prepared for the second half of the double-header on Sunday.

“On Friday, in the first two or three rounds, I felt like I was in Vegas playing on house money,” said Kunkel. “I was really just having some fun with the new car. When I won the fourth and fifth round, I realized that maybe I’m not playing on house money. Maybe I can actually win this thing. Once I got enough runs, I starting to think I might be able to do something good. 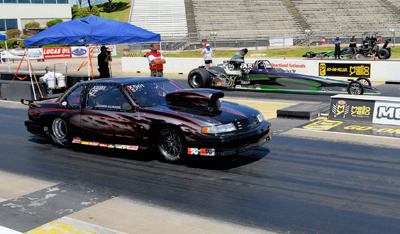 “By Sunday, I had a lot of confidence in the car, but I had to work on my lights. I really just didn’t want to go out early and have everything think the first win was a fluke. Once I got more data, I got the car zeroed in a little more. I didn’t care what lane I was in. I was just really comfortable.”

Kunkel’s starting line driving was also dramatically improved on Sunday as he made his way through eight more tough rounds. In the final, Kunkel completed the rout with a .003 light and an 8.93 to take a holeshot victory over Terry Pollard’s 8.91 effort.

“I’m still shocked to leave with two Wallys,” Kunkel said. “I probably cried more than I ever have after winning a race. When I started this whole deal, I was not sure if I could even put together a set-up like this. It goes against everything I’m used to but it’s really fun after you do it. It’s cool to go to the finish line and not left off. You don’t really need to look for the other guy, but I do think I’m going to put a mirror in the car just so I can tell if he’s broke. I’ve won some back-to-back bracket races but never been on a heater like this. I usually just read about people who do things like this.”