It probably wasn’t fair to call it a “must win” race, but if Christopher Dodd is to become the 2020 NHRA Lucas Oil Drag Racing Series Super Comp champion, his recent win at the Mopar Express Lane NHRA Midwest Nationals presented by Pennzoil could certainly be defined as “clutch”.
14 Oct 2020
Kevin McKenna, NHRA National Dragster Senior Editor
The Sports Report 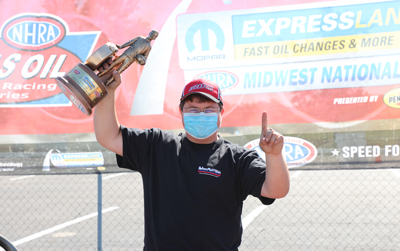 It probably wasn’t fair to call it a “must win” race, but if Christopher Dodd is to become the 2020 NHRA Lucas Oil Drag Racing Series Super Comp champion, his recent win at the Mopar Express Lane NHRA Midwest Nationals presented by Pennzoil  could certainly be defined as “clutch”. Dodd outlasted a tough field of 8.90-class entries to win his third national event title and as a result, he’s now locked in a late-season battle for the top spot. Heading into the final weeks of the abbreviated 2020 season, Dodd is ranked third in the Super Comp standings, but is just 24-points behind leader Troy Williams Jr. and six points behind defending champion Ray Miller III, who is currently second. For someone who has yet to post a top ten finish, Dodd is quickly adjusting to the view from the top.

“To be honest, we really weren’t keeping up with the points until after we won last week in St. Louis,” said Dodd. “Obviously, we’d won three races earlier this year, so we knew we were doing well but I didn’t really start chasing this until now. St. Louis has been good to me in the past and my dad wanted me to go to the divisional in St. Louis but give how many races we had coming up, we decided to wait it out and be fresh for the nationals and that worked out.”

To those who may think that Super Comp cars are always consistent and require very little maintenance and tuning, Dodd has news for you; they can often be temperamental, a lesson he’s learned first-hand this season. For all his success, Dodd has sometimes struggled with consistency, which is essential in the class where most races are decided by a few thousandths of a second or sometimes even less.

“We had a great car towards the end of last year and did really well with it,” Dodd said. “Then we went to Indy this year for the U.S. Nationals and something happened between races and we still can’t quite put our finger on it. We just need to get the car back to where it was and we didn’t know where to start. Before the Dallas divisional, we changed tires, plugs, a cap and rotor, you name it. Then, we went out and won the second half of the double-header so we thought we had it fixed. Then in St. Louis, it still was not quite right so we changed converters, throttle stops and a bunch of other things. You never know when you’re going to have an opportunity like this so we’re doing everything we can to make it happen.”

His car may now have been perfect, but Dodd, who was named the Super Comp driver of the Year in his native South Central Division last season, successfully defended his 2019 St. Louis title with a combination of smart driving both at the starting line and finish line. He also admittedly had a bit of luck, particularly in the final round where opponent Larry Bernhausen fouled out by just a thousandth of a second. Dodd’s best run came in the semifinals where he coupled a .014 light with a perfect 8.900 in his win over Michael Eggleston. That, he says was a key to his victory. 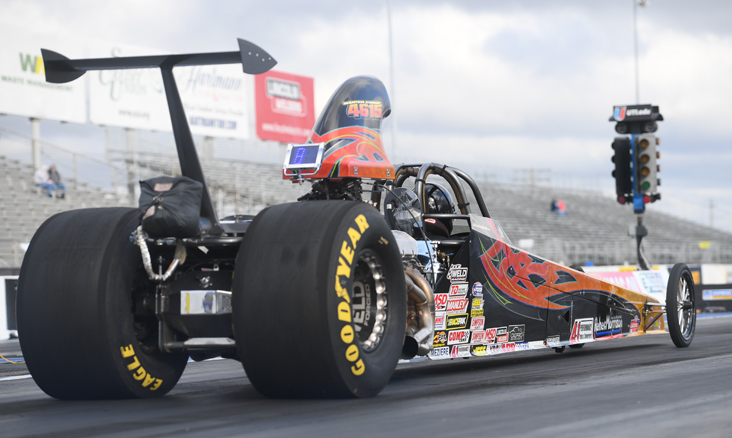 “We had four days’ worth of eliminations and each one feels like a first round,” Dodd said. “The race [against Eggleston] was really tough because it could have gone either way. I was .014 and 8.900 and he was .012 and under by a thousandth. That’s one of those races that could easily have gone the other way. Sometimes you just look at the time slip and go ‘Wow’, because you can’t believe how close it is. That was one of those races.”

Dodd now has three national event wins, and ironically, all three of them have come at World Wide Technology Raceway. He won in 2016 and then again last year. He’s also got a pair of runner-up finishes at national events and both of them have come at the Texas Motorplex, which is the next stop on the tour. With four wins in the bank, Dodd knows he might need another victory or two in order to win the championship. Fortunately, he’s in a good spot since he’s only been to two national events so any points accumulated at his next race will fully go towards his total, and he’ll have a couple of opportunities in which to improve.

“It looks good on paper for sure; I think we can do well, but it’s far from over,” said Dodd, whose supporters include his parents, Sean and Teri, and his brother, Jonathon. He also relies on corporate support from Reher-Morrison Racing Engines, A-1 Converters, Sullivan Motorsports, Advanced Product Design, Goodyear, and Dewco. “I’m just hoping that we’ve found whatever the problem is, and we have the same car that we had at the beginning of the year because it was phenomenal. It was the best Super Comp car I’ve ever had. The nice part is that the next two races are at home [in Texas]. We’ve done well in Dallas so I’m glad that’s next up. I can claim points at all three nationals that are left so we’ll see what happens.”