With a win at the Million Dollar Drag Race, three titles at the Moroso 5-Day race, and a host of $10,000, $20,000, and even $50,000 wins, Troy Williams Jr. long ago secured his place among the greats in high stakes E.T. bracket racing. Williams has won so many big races that he can’t remember them all, but he’ll certainly never forget his most recent win at the 66th annual Denso Spark Plugs NHRA U.S. Nationals. 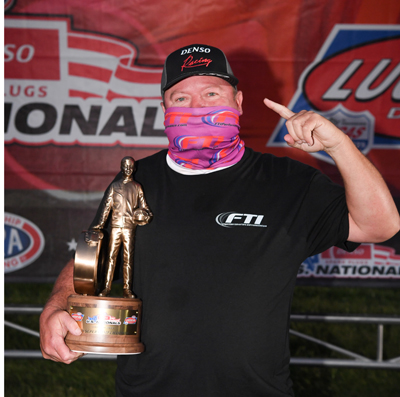 “I grew up in this sport and I’ve seen the value that is put on an Indy win and it’s enormous; a great accomplishment,” said Williams, who works for FTI Performance, a company owned by Funny Car racer Paul Lee. Last winter, Lee urged Williams to take a shot at the Super Comp title and after winning the sport’s most prestigious event, he’s glad he did. “Coming from the bracket racing world this probably wasn’t initially a bucket list item but the more I race NHRA races the more I see how much this means. When I won the final on Sunday night, I had almost 200 text messages before I got back to my trailer and they haven’t stopped for days. I’ve been in the final of a $100,000 bracket race and haven’t gotten nearly that response so the one thing I really want to convey is this; I’m incredibly proud to win this race. That [U.S. Nationals Wally] is a prized possession and it’s going to be pretty close to front and center in my trophy case. This was also important to dedicate this win to my uncle, Bob Browning, who passed away recently.”

Williams isn’t a complete stranger to the NHRA scene. He won the Super Street title in Atlanta in 2013 and was a runner-up to Jacob Elrod in Super Comp at the 2017 Amalie Gatornationals. Still, he admits that the subtle differences between bracket and index racing have often proven to be challenging. One of the hallmarks of a good racer is the ability to adapt to a set of variables, and Williams prides himself on making such adjustments.

“Mentally, there are a lot of differences between Super Comp and bracket racing and there’s also changes made to the car, specifically the throttle stop,” Williams said. “Mentally, you get in a groove when you’re bracket racing because we usually run in one day and sometimes multiple races in one day. You can also buy-back if you make a mistake in the first round. In this [Super Comp] deal, especially Indy, we race one round on Friday and two more on Saturday, and then a couple more Sunday morning and finish on Sunday night. I’m usually not prepared to do that kind of racing.”

On Friday morning, Williams took to the track along with more than 160 other Super Comp hopefuls for an eight-round marathon. Admittedly, he had some luck along the way especially in round three where opponent Mike Green left first with a -.011 red-light. Williams was red behind Green with a -.003 light. Williams also beat round four opponent Roger Chaney by four-thousandths and slipped the noose by .001-second in his quarterfinal race against Kris Whitfield. Shortly after 8 p.m. on Sunday night, Williams staged against Jerron Settles in one of the biggest finals of his life and won with a slowing 8.945 while Settles broke out with an 8.899.

Williams also had an ace up his sleeve in the form of West Coast racer Kyle Seipel, who helped him dial his car for each round. Seipel was at his home in California but continually monitored the conditions at Indy. Seipel’s input not only helped Williams hit the index more consistently, but also helped provide a confidence boost.

“He was up all hours of the day and night and he never missed a beat,” Williams said. “My style of driving is usually to make sure I can run under and then rely on my skills on the starting line and finish line to get me through but it’s a much better deal to know what your car is doing from run to run. Kyle wasn’t here so he can’t tell if the winds are gusting, but he’s able to make a call 20-30 minutes before we run, and he’s usually spot on. On my bye run, he had the car set up to run 8.900 and I ran 8.899. It’s uncanny.”

Williams’ Indy win was gratifying for a number of reasons, but it might also provide an even bigger payoff down the road. By winning eight elimination rounds, Williams added 115 points to his score and now has a substantial lead in the battle for the Lucas Oil Super Comp championship. Given the uncertainty that has surrounded the 2020 season since the arrival of the COVID-19 virus, Williams is taking nothing for granted, although he likes his current position.

“I don’t think I have enough to win it right now,” Williams said. “I have one more divisional which will be the Division 2 race in Rockingham. I’m improving on a first round loss and Rockingham happens to be one of my favorites tracks. If I had to pick a place where I needed to go some rounds that’s it. I am concerned about all the races in Las Vegas at the end of the year. If someone gets hot over that three week stretch, they could easily pass me. If I have to, I’ll fly out there and borrow someone’s car, but my schedule for the next two months is pretty packed including two bracket races that could pay a million to win and two more that might pay a half-million. This would be a good month to stay hot.”