The Sports Report: Winning the war

Even though he lost the Super Comp final to Jonathan Anderson, Ray Miller III took another step towards a national championship in Charlotte.
01 May 2019
Kevin McKenna, NHRA National Dragster Senior Editor
The Sports Report

In NASCAR teams, Ray Miller III had what one would call “a good points day” during last weekend’s NGK Spark Plugs Four-Wide Nationals in Charlotte. Miller lost in the Super Comp final against Division 2 rival Jonathan Anderson, but that did little to take the sheen off an otherwise impressive performance. Miller left alongside Anderson in the final round and took the stripe at the finish line, but he paid the price with an 8.88 breakout. Miller may have lost the battle this time, but he’s clearly winning the war. 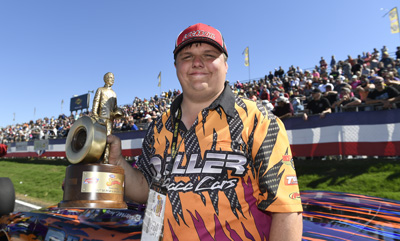 “This definitely has been an awesome start to the season,” said Miller. “We didn’t make any changes over the winter. We just refined what we had, and I think that’s helped. Late last year I had a win and a runner-up and everything was just clicking. I think it helped that we didn’t make changes. With four finals it’s not too early to think about [a championship] but I try not to do that. I’ve been in similar situations before and got passed and I’ve had it the other way where I’ve been chasing someone and didn’t quite make it. I think I’m looking good but I’ve learned not to count chickens. I think the biggest thing I learned is to not change my driving style. Before, I maybe tried to tighten things down and drove defensively. That probably cost me.

“In the final round, my car was set-up a little faster than we thought,” Miller said. “That was odd because we came right back after the semi’s so I was not expecting a big change. He was also set-up fast. I found out later that he had a problem with his delay box and couldn’t change his settings. He dropped me and I didn’t catch it.”

Other than losing the final in Charlotte, not much has gone wrong for Miller this year. He’s already got three wins and a runner-up on his scorecard. Miller’s only blemish is a round two loss at the 50th annual Amalie Motor Oil Gatornationals, and his current score of 439 points, represents an average of 88-points per event. 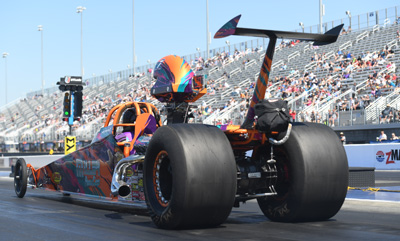 Looking at it from a different perspective, should Miller attend all eight events where he’s eligible to earn points, he will finish with 529 points even if he doesn’t win another round. That’s nearly enough to guarantee a top ten finish. In 2018, Steve Williams won the championship with 620 points and Miller finished seventh with 567 points, he’s on pace to crush that total this year. While it’s still far too early in the season to start making plans for a championship banquet, Miller certainly feels good about his hot start.

“In 2014 I did really well early and finished second to Luke [Bogacki] and the first year I chased points in NHRA I finished third against Gary Stinnett,” Miller said. “Last year I was No. 7 so I think I’ve covered most of the numbers except for No. 1. I hope that now I’ve got the experience to get it done. I like to think I’m a better racer and that I make smarter decisions. I’ve raced him [Anderson] three times already this year. We ran in the semi’s of the points meet in Gainesville and the final at South Georgia Motorsport Park. He’s right up there with me in the points so that round might be really big before this is all over.

“We’re a family business and it would definitely be good for business for add another championship,” said Miller. “It would also be good for all the companies that we work with and who support us. I’m trying not to get too caught up in it. We’ve got a long way to go.”

The best of the rest: Six years after making his first national event final at the JEGS Cajun SPORTSnationals in Belle Rose, Jim Kimbrough broke through for his first career-win in Comp Eliminator. Kimbrough, in his B/DA dragster, faced a tough opponent in No. 2 qualifier Randy Daniels, but he gave himself a great chance to win with a .003 light and a (-.609) 6.781. Daniels finished with a (-.538) 8.492 in his E/SM Sunfire. Kimbrough began eliminations by beating two-time and current world champ Frank Aragona Jr. He managed to avoid excessive CIC penalties in his round wins against Ken Voight and Tony Pontillo. 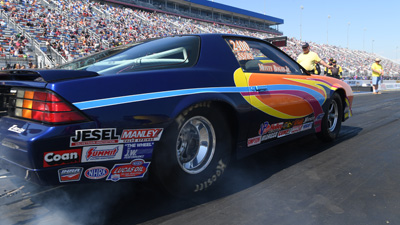 Monty Bogan entered the Charlotte event with two NHRA wins to his credit and nearly left with four after a win in Super Stock and a runner-up finish in Stock Eliminator. Bogan, a winner in Gainesville in 2003 and Dallas in 2009, crushed the Tree in the final with a .001 but didn’t need it after former national champ Joe Santangelo fouled by four-thousandths. Bogan also got help from semifinal opponent Joe Tysinger via a red-light start but he had his hands full in the quarterfinals against Anthony Bertozzi. Santangelo punched his ticket to the final after former world champ Byron Worner fouled in the semi’s.

Drew Skillman’s hopes of repeating his Gainesville win in the SAM Tech.edu Factory Stock Showdown took a hit when he destroyed an engine in the second round of eliminations, but the former Pro Stock driver rallied to win in Stock. Skillman earned his 17th career national event title with an incredible final round performance that included a .002 light and an 8.868 on his 8.86 dial. That prevented Super Stock winner Monty Bogan from joining the list of drivers that have doubled up in NHRA competition. Skillman was able to share the zMax Dragway winner’s circle with his father, Bill, who won in the Factory Stock class. 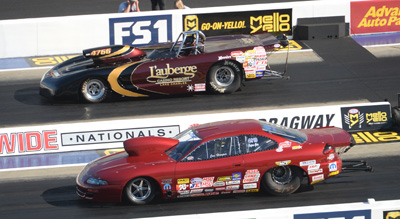 The Super Gas title went to Joe Harper after a stunning final round performance that included a .006 light and a 9.913 that opponent Shannon Brinkley could not match. Harper, who also won the 2002 Houston race and the 2017 JEGS SPORTSnationals in Bowling Green, Ky., was exceptionally sharp off the starting line with a string of .00 lights in the last four rounds and nothing worse than a .025 in eliminations. Runner-up Brinkley defeated Super Comp runner-up Ray Miller III in the quarterfinals to earn a bye into the final.

Former Division 3 champ Jerry Albert claimed the fourth win of his career and his second in Charlotte when he drove past Chuck Harris to win in Top Sportsman presented by Racing RVs.com. Albert made it to the final by beating former Pro Stock racer Vince Fourcade in the quarterfinals and Super Gas world champ David Tatum III in the semi’s. Albert won the final with a 6.732 on his 6.72 dial after Harris broke out by three-thousandths.