The Sports Report: A semi-sweep 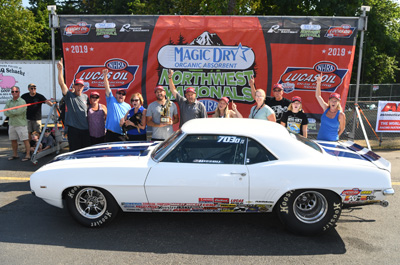 Over the last three weeks, a number of Lucas Oil Series racers on the West Coast have competed in their own version of the Western Swing which includes the Division 7 Lucas Oil Series event at Sonoma Raceway, the NHRA Sonoma Nationals, and the recently completed Magic Dry NHRA Northwest Nationals in Seattle. Racing two cars, Rizzoli compiled an enviable 24-4 record in elimination rounds and returned home with a pair of Wally trophies after back-to-back wins in Sonoma and Seattle, both of them in the Jim Whiteley-owned Super Stock Camaro he calls “Peppy”.

Rizzoli’s three-week odyssey began innocently enough at the Division 7 Lucas event, where he scored a round three finish in Super Stock and a round four finish in Stock. Things heated up a week later at the Sonoma Nationals where Rizzoli won in Super Stock and reached the quarterfinals in Stock. Riding a wave of confidence, he ventured north to Seattle where his longtime dreams of a national event double almost came true. Rizzoli scored back-to-back wins in Super Stock and reached the Stock final before dropping a tough battle against Andy Morris. The final tally for the month was an impressive 24-4 round win record for both entries. Like most racers, Rizzoli has admittedly had a few hot streaks in his career, but nothing that compares to this one.

“I’m just feeling the rhythm and the vibe,” said Rizzoli. “It was almost epic, but I’ll take a win any day. Thanks to my car owner, Jim Whiteley; he gives me an awesome car.

“I could not do this without the support of my family, friends, guys back at the shops, great car owners and sponsors,” said Rizzoli. “I feel very fortunate to be able to do what I love, and thanks to my racing friends; Shawn Langdon and Brad Plourd. I had a great day and this car has been doing really well and we’re going to go for the championship.”

In addition to a pair of Wally trophies and a sizable windfall in prize money, Rizzoli emerged from the Sonoma-Seattle events with something that could ultimately prove to be even more valuable; a shot at the national championship. As a result of his recent surge, Rizzoli is currently ranked No. 3 in the nation in Super Stock, and he’s only competed in four Lucas Oil Series races, so he’ll earn a full score at his next points event. That would put him in a position to overtake current leader Joe Santangelo. Rizzoli can improve his score at two more national events and four more Lucas Oil Series races so there is much room for improvement. 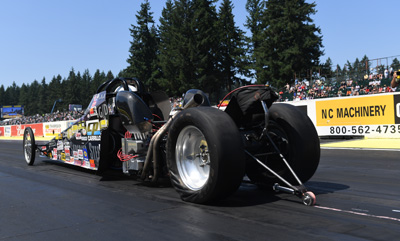 The best of the rest: When it comes to the Comp Eliminator class at Pacific Raceways, no one can compare with Bryan Hyerstay, who has now won his home event for the last three seasons. Hyerstay, in his miniscule Volkswagen-powered G/Dragster, earned the fifth national event title of his career when he stopped Doug Lambeck in the final round. Hyerstay left first and drove to a (-.483) 8.637 to hold off Lambeck’s (-.481) 8.359 in his D/SMA Pontiac. Hyerstay also scored wins against Dino Kost, Adam Bowdish, and Ryan Warter in eliminations. In addition to his Seattle victory, Hyerstay also has a win and a runner-up in Divisional competition this season. 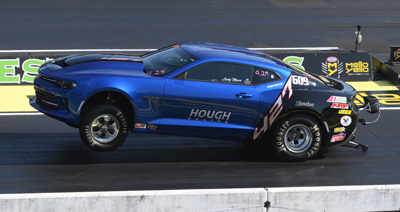 Rizzoli came within four-thousandths of a second of a third win in two weeks but dropped the Stock final to Andy Morris, who was racing in his third Seattle final in his third class. Morris, a previous Seattle winner in Top Dragster and a runner-up in Super Comp, drove his FS/A COPO Camaro to a 9.381 on his 9.37 dial to knock off Rizzoli, who was close behind with a 10.323 on his 10.31 dial. Morris made it to the final following wins against Greg Marshall, Tommy Gaynor, Joe Sorensen, and Kelly Thomas. Morris’ round three battle with Sorensen’s ’69 Camaro was also close with a .004-second margin of victory. 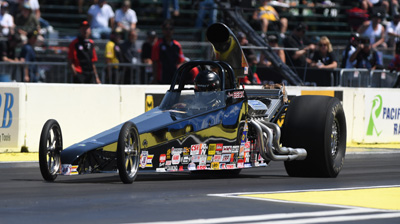 Two years after winning his first national event title in Seattle, Randy Beck returned to claim another Super Comp victory when he stopped James Warden in the final round. After an event start, Beck sealed the deal with an almost-perfect 8.901 to hold off Warden’s competitive 8.915. Beck started the season with three-straight round one losses but has come on strong lately and he’s currently ranked in the top ten nationally following his latest win. With elapsed times of 8.901 and 8.908 in his early-round wins, Beck never strayed far from the Super Comp index. He was razor-sharp in the semifinals with a .003 light and an 8.908 against Brian Preszler. 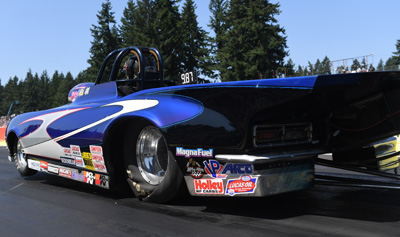 A decade ago, Michael Dalrymple earned the Super Comp title in Seattle and now he’s got a matching set of Wally trophies after driving to the Super Gas win this year. Dalyrmple’s final round race against Rod Sousa was one of the most memorable of the weekend since it featured a margin of victory of just a thousandth of a second. Dalrymple likely had a hint that the Magic Dry NHRA Northwest Nationals was going to be a good event after he also won the Super Gas title at the Division 6 Lucas Oil Series race in Woodburn, Ore., just three weeks earlier. Dalrymple earned his spot in the final by beating John Mellof while Souza topped George Scott on a holeshot to reach his second-career Seattle final. 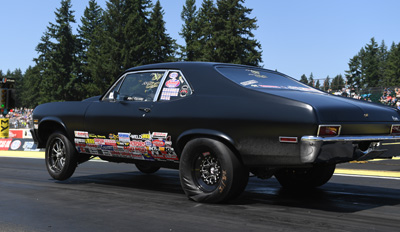 There was a first-time winner in Super Street after Mark Kielman topped Chris Cannon on a holeshot in the final round. Keilman, in his ’70 Nova, won with a 10.922 to Cannon’s 10.911. Earlier in the event, Kielman was impressive with a perfect .000 reaction time in his win against Larry Chase. Kielman also scored memorable victories against Jim Mabry and Brad Plourd to earn a bye run into the final. The battle between Keilman and Plourd will long be remembered as the closest race of the weekend, regardless of class with a final margin of victory of just .0001-second. 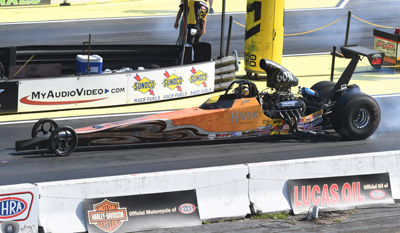 Top Dragster presented by Racing RVs.com also featured a first-time winner in Jeff Havens, who secured the title after Thomas Bayer fouled by two-thousandths of a second in the final round. Havens would have been tough to beat regardless thanks to a .011 light and a 6.898 on his 6.88 prediction. Havens was very quick and very consistent throughout eliminations in his wins against Sadie Glenn, Jennifer Wiens, Brianna Wiens, and Gene Heaton. Havens enjoyed a solid tune-up for his home race in Seattle after he reached the final of the Division 7 Lucas Oil Series event in Sonoma two weeks earlier. 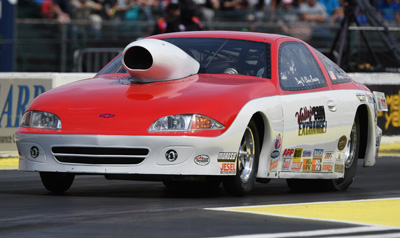 Doug Bracey won a pair of national events in Super Gas in the 1990s including the 1991 Pomona season-opener and he’s now got a third title after winning Top Sportsman presented by Racing RVs.com in Seattle. Bracy, in his Chevy Cavalier, picked up the win in the final with a competitive 7.211 on his 7.21 dial after opponent Shawn Herbst broke out by three-thousandths of a second. Bracy, now a perfect 3-0 in national event finals, also topped Joe Loch, Casey Plaizier, and Ray Martin to earn a bye run into the final.