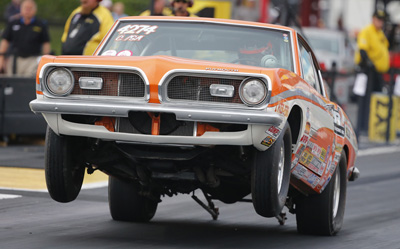 To suggest that Jacob Pitt’s 2018 season was a disappointment would be a bit like saying the Titanic encountered a small problem during its maiden trans-Atlantic voyage in 1912. While Pitt didn’t hit an iceberg, he did encounter almost every other problem imaginable including a myriad of broken parts and broken dreams. Pitt didn’t win a race in 2018 and didn’t even appear in a final. He had two semifinal appearances in Stock and in Super Stock, he was limited to a pair of quarterfinals. That’s hardly the results that one might expect from a past national event winner.

“All year, I was having car problems, especially with my Super Stocker,” said Pitt. “I’d have it together for a race or two, then I’d have a problem with the bearings, and I’d have to take the engine back out and fix it.  It seemed like that happened every one or two races. We did a major thrash to get ready for Indy and then in Q1 it went out and chewed up the bearings again. That engine had eight runs on it. I towed all the way from Texas to Indy, and I was so frustrated that I put a for sale sign on the car for the rest of the weekend. I’m not rich. I’m just a guy who has a manufacturing job with Lockheed Martin; I’m a try-hard guy.”

During the off-season, Pitt addressed the majority of his mechanical issues, and while he’s not yet ready to pronounce all of his problems solved, he’s cautiously optimistic that he’s got a handle on it.

It’s only April but Pitt has already exceeded anything he did last year on track. A week ago, he bagged the Stock title, in the first leg of the Division 4 double-header at the Texas Motorplex and he followed with his third national event title at the Mopar Express Lane NHRA SpringNationals powered by Pennzoil.

“When you win two races back-to-back, it does make all the hard work and effort worthwhile,” said Pitt. “When you’re struggling, you wonder, ‘Man, am I getting a sign that maybe I should stop?’ Then you win a divisional and a national in two weeks and you realize why you’re still out here.”

For Pitt, the cash from two wins is certainly nice, and he’s scored a lot of points that might come in handy later in the season, but his biggest takeaway from the double win is confidence.

“For sure, I’ve got a ton of confidence right now,” said Pitt. “Racing is like any other sport. You get on a hot streak and all of a sudden you don’t doubt yourself and you don’t doubt the car or doubt the decisions you’re making. You just feel confident every time you go up there. I know the toughest competitor you’ll ever face is the one that looks back at you in the mirror. That’s why I’m eyeballing going to Atlanta in a couple of weeks [for the Arby’s NHRA Southern Nationals]. It just seems right to go while you’ve got some momentum.” 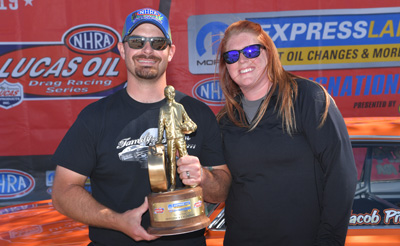 In Houston, Pitt went to the quarterfinals in Super Stock before a breakout ended his day. Down to one bullet, he went the distance in Stock by driving his ’69 Barracuda to final round win over Brett Candies. Ironically, he also raced Candies in the final of his first national event win at Houston Raceway Park in 2014. Pitt grabbed a slight lead at the start and held off Candies’ fast-closing Cobra Jet Mustang to win by six-thousandths.

“He’s a second quicker than I am and I’m glad I didn’t have to race him in the semi’s because the weather was so much different on Sunday than it was earlier in the week,” said Pitt. “We fought the weather all weekend. First, it was warm and muggy. Then it cooled down, and on Sunday, that cool front came through and the wind kicked up and it was hard to know where you were. Racing Brett is tough. He has got really great equipment and he’s also one of the most improved drivers out there. He’s very tough right now.

“I’ve got a lot of people to thank for this including my wife, Brandi, kids, Evelyn and Vivian, my mon, Sandra Pitt, car owner Debbie Ridenhour and God,” said Pitt. “I also get some great support from companies like Mickey Thompson, JR1 Racing Oil, Pyrotect, Ultimate Converter, and Pitt Stop Café.”

The best of the rest: Battling health issues, Pete Peery finished No. 3 in the Super Stock standings last year and he’s off to another solid start with his fourth-career national event victory. Incredibly, Peery left with a .002 reaction time in the final and was last off the starting line because opponent Darrin Christen, was perfect with a .000 light. Christen followed with a very competitive 9.922 on his 9.90 dial but even that wasn’t enough for the win. Peery crossed the striped first by two-thousandths of a second with a 9.198 on his 9.18 dial. Peery, a few months shy of his 72nd birthday, also defeated Slate Cummings, Dale Hulquist, and Phillip Giles to reach the final.

There was guaranteed to be a first-time winner in Super Comp when Vernon Rowland took on Chris Vang in the final round. Rowland, who defeated brothers Jacob and Tony Elrod to reach the final, capped off the win with a .008 light and an 8.890 to win in a double breakout. Vang, who works as the clutch mechanic on Deric Kramer’s American Ethanol Pro Stock Camaro, left with a .021 light and ran further under the index with an 8.873. Earlier, Vang scored a holeshot win over Steve Evans, 8.906 to 8.903. 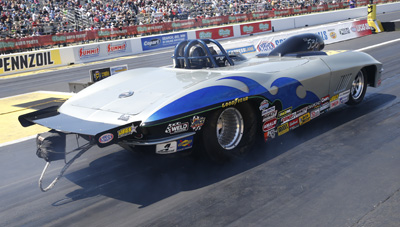 If there was an award for best driving performance of the event, it almost certainly would have gone to first-time Super Gas winner Bob Rowan, who didn’t have a reaction time worse than .017 during time trials or final eliminations. Rowan was at his best in the final with a .002 light and a 9.908 that was almost unbeatable for runner-up Koy Collier, who turned in a 9.882 breakout. Rowan was also .003 and .004 in the quarterfinal and semifinal rounds. 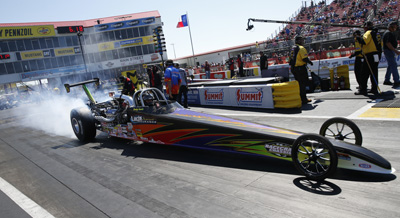 In 2004, Ross “Baby” Laris won his first national event title at the JEGS Cajun SPORTSnationals in Belle Rose, La. Since then, he’s watched his son, Holden, become a three-time national event winner in Super Comp, Super Gas, and Top Dragster presented by Racing RVs.com. The elder Laris took a step towards evening the score when he turned on the win light in the final round of Top Dragster in Houston. Laris was the low qualifier in the 23-car field with a 6.106, right on the 6.10 performance ceiling. Dialed a 6.13 in the final, Laris blasted to a 6.106 after opponent Williams Kruse fouled by seven-thousandths. Laris also stopped Bill Swann and Rusty Baxter in eliminations. The chances of a father-son final round were squashed when Holden Laris fell victim to Kruse’s .009 light in the quarterfinals.