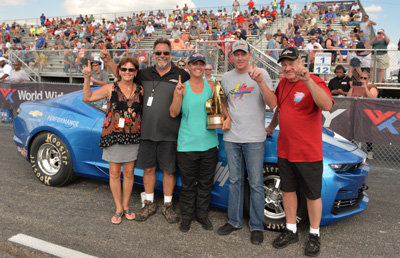 Almost everyone has heard of this old English rhyme that is supposed to bring good fortune and prosperity to newlyweds and for St. Louis Stock champ Brina Frank, it certainly seems to have worked. In this case, the new, borrowed and blue happens to be the 2019 model COPO Camaro that Frank drove to her fifth-career national event win last weekend. Frank, formerly Brina Splingaire until her June 2018 marriage to Brandon Frank, got the opportunity earlier this to drive the car for owner and longtime Comp racer Jim Greenheck. Given the opportunity to drive the 50th anniversary edition of the COPO, Frank did not need to be asked twice.

“Earlier this year, I was selected to buy a 50th anniversary COPO and I had my [Super Stock] Cobalt for sale,” said Frank. “I offered the deal to Jim, who bought it on my behalf. We ended up breaking the Cobalt and Jim said I could drive it if I wanted to and I couldn’t say no to such a great opportunity. If not for Jim and Debbie Greenheck, I wouldn’t have gotten to race this year.

“We picked the car up in August, went testing on Thursday in Bowling Green and then I got down to eight cars at the [Division 3 Lucas Oil Series event],” Frank said. “We lost in the first round at Indy, and then went to Earlville, Iowa and got rained out. This was my fourth race in the car and I think I have about 27 runs in it now.”

So, what’s old? How about Frank’s ability to turn on win lights? She’s been doing a lot of it since her first national event win in Super Gas at the 2008 St. Louis race. She also won at World Wide Technology Raceway in 2015 when she won the Super Stock title over Tommy Phillips, a guy who almost never loses a national event final. Frank didn’t have an easy road to the final with tough races against Brett Speer, Super Stock runner-up Brandon Bakies, Daryl Bureski, and Mike Lund. She won the final round against Brainerd winner Chris Knudsen by seven thousandths on the strength of a .027 light and a 9.306 on her 9.30 dial.

“I wasn’t sure what to dial in the final because we ran after Pro Mod and sometimes the track changes,” said Frank. “It felt like a close race but I couldn’t see the win light in my lane. I really dind’t know if I’d won until I came around the corner and the NHRA [turnaround crew] told me I won and showed me the ticket. This car is bigger than my Cobalt but it’s very smooth to drive. We adjusted the seat to make it easier for me to see out of and I’ve adapted pretty well. This is also the first time I’ve used a two-step; in my old ’67 Camaro I just used the footbrake so I was a bit apprehensive at first but it’s all worked out.” 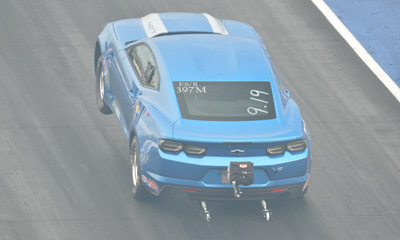 The St. Louis event was the final race on Frank’s schedule for 2019, and she’s unsure of what 2020 will bring, other than she’ll be racing something at events throughout the Midwest.

“We’re a little undetermined for next year,” Frank said. “Being that this is a 50th anniversary COPO, Jim might want to keep it as a collector car, but we’re also working to fix the engine in my Cobalt so I’ll be out there in something. Hopefully, the COPO because it’s a fun car to drive. I have to thank my parents, Jeff and Cynthia, my husband, Brandon, and Jim and Debbie Greenheck, and my sponsor, C-Tech Manufacturing. They made all this possible.” 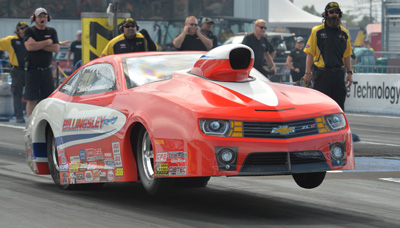 The best of the rest: Not much makes up for losing in the final round of the Chevrolet Performance U.S. Nationals, but for Comp racer David Billingsley, a win in St. Louis is a good start. Billingsley, in his I/AA Camaro, won his sixth-career national event title and his fifth in Comp when he stopped Travis Gusso in the final round. Billingsley grabbed a big advantage at the start with a nearly-perfect .008 light and held on for the victory with a (-.487) 8.123. Billingsley’s road to the final round also included victories against Ray Skillman, Chase Williams, points contender Craig Bourgeois, and two-time national champion Bruno Massel. Billingsley’s only CIC violation came in the second round against Williams, where he used a (-.559) 8.101 to advance. 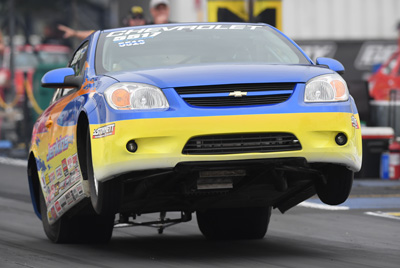 Following his second win of the season in Super Stock, it isn’t much of an exaggeration to suggest that Justin Jenkins is having one of the best years of his career. The Nebraska-based Jenkins has had a tough year at Lucas Oil Series divisional races but he’s batting .500 at national events with wins in Denver and St. Louis. Jenkins defeated Larry Hodge in the quarterfinals to earn a bye into the money round where he faced the SAM Tech.edu Camaro of Brandon Bakies. First off the starting line with a .015 light, Jenkins rolled the throttle to a 9.561 on his 9.51 dial to cover Bakies’ 9.696 on his 9.66 dial. Jenkins, who was also a runner-up in St. Louis in 2012, turned in his best performance in the second round where he ran a perfect 9.510 on his 9.51 to stop Darrin Christen. 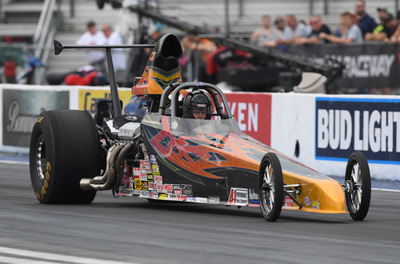 Christopher Dodd’s victory at the AAA Insurance NHRA Midwest Nationals should be a case study in perseverance. Unable to advance past the second round in his first seven races this year in the ultra-competitive Super Comp class, Dodd never gave up and he was rewarded with his second national event victory after stopping former Top Dragster national champion Lynn Ellison in the final round with a .007 light and an 8.910. Dodd was exceptionally competitive in each round including a perfect .000 light and an 8.909 in his round two win over Kimbra Fuesting. Dodd also topped four-time national champion Gary Stinnett and Jeremy Demers on his way to the final. He was .009 or quicker off the starting line in four of the last five rounds. 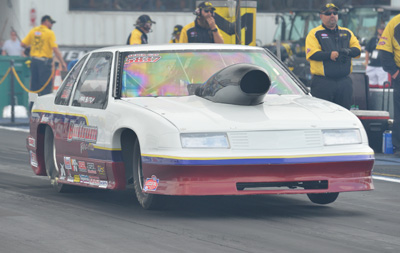 Mark Buttrum, who lives just a few miles from World Wide Technology Raceway in O’Fallon, Mo., won his first national event in just his third attempt when he stopped championship contender and Brainerd champ Vernon Rowland in the final. In one of the closest races of the weekend, Buttrum drove his Chevy Lumina to a 9.920 to 9.910 holeshot victory and turned on the win light by .001-second. Buttrum made his way to the final round with wins against Charlie Stewart, Rodney Benson, and Alan Bush. After reaching the final, Rowland is the No. 4 ranked driver in Super Gas. 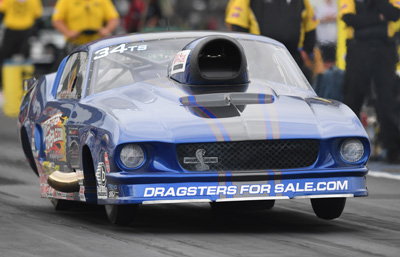 Mark McDonald extended his streak of national event victories to four consecutive years in the Top Sportsman presented by Racing RVs class thanks to a final round win over Allen Firestone. McDonald didn’t let the pressure of a final round affect him with a .002 light and a 6.641 on his 6.61 dial that turned on the win light. Firestone, the current leader in the battle for the national championship, was just two-thousandths behind with a 6.611 on his 6.60 dial. McDonald got a free run in the quarterfinals when Benjamin Board was unable to show, and earned his spot in the final by stopping Curt Fredrich in the semifinals.