It might not have been exactly what the event planners had in mind, but when sportsman eliminations for the 50th annual Amalie Motor Oil NHRA Gatornationals were moved to Saturday evening, it made for an electric atmosphere, especially for those who went on to win the historic event. A rainy forecast necessitated the move, and with professional eliminations delayed for more than two hours on Sunday, it proved to be a wise choice. 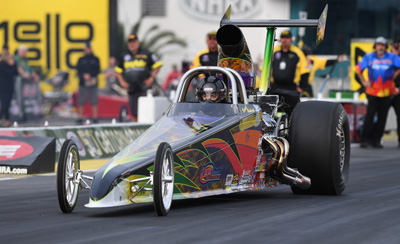 One of the eight drivers who went on to claim the rare limited-edition gold NHRA Wally trophies was second-generation racer Holden Laris, who now has three wins, each one in a different class. After previous wins in Super Gas and Top Dragster, Laris scored in Super Comp with a final round win over Nicole Stephenson. Laris left first and won the final on a holeshot, 8.941 to 8.926.

“What a great weekend, to be able to pick up the 50th with my family and team, said Laris, who races along with his father, Ross, the winner of the “Baby Gators” the Southeast Division Lucas Oil Series event in Gainesville a week earlier. “Winning this weekend, my dad winning the Baby Gators last weekend, this was a great trip to Gainesville.”

Laris, who calls Raceland, La., home, had to race his fair share of quality opponents on his way to the victory including a pair of world champions, Sherman Adcock Jr. and John Labbous Jr. Laris was nearly perfect in his win over Adcock with a .011 light and an 8.900. Two rounds later, he punched his ticket to the final by beating Labbous, 8.951 to an 8.895 breakout.

“I have three national event Wallys and this by far is the one that means the most, Laris said. “I feel like I drove really well, I executed a game plan in a tough round against Sherman. In the final, it was great to see the win-light come on, I was kind of expecting it to come on when I crossed the finish line but you never know.” 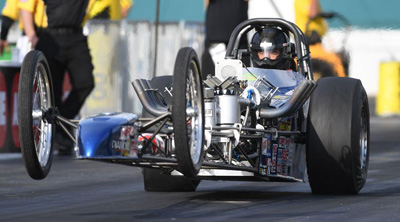 The best of the rest: Laris shared the Gainesville winner’s circle with fellow Division 4 racer Craig Bourgeois, who wheeled his front-engine Nostalgia Dragster to his ninth-career win, all of them in Comp Eliminator. Bourgeois cut a perfect .000 light in the final against opponent Randy Daniels and needed almost all of it. Daniels drove his G/Altered Pontiac to a (-.603) 8.297 but it wasn’t enough to beat Bourgeois (-.560) 6.820. For Bourgeois, the toughest challenge came in the quarterfinals where he defeated 100-time national event winner David Rampy with a (-.550) 6.880. The winner of that battle got a bye run into the final while Daniels earned his spot there by beating three-time Indy champ Brad Plourd.

Kevin Riner enjoyed his Super Stock win at last year’s Amalie Motor Oil Gatornationals so much he decided to do it again in 2019. Riner stretched his Gainesville win streak to 12-straight rounds by beating Mark Alvey in the final round. After an even start, Riner survived a narrow double breakout with a 10.278 on his 10.28 dial. Alvey crossed the stripe first by four-thousandths but paid a price for with with a 10.055 breakout on his 10.06 dial. Riner’s win was highlighted by a perfect .000 reaction time in round three and a victory over world champ Anthony Bertozzi in the quarterfinals.

After driving her wheelstanding ’67 Firebird past Ed Longhany’s ’69 Camaro in the Stock final, Randi Lyn Shipp is now a six-time national event champion but this one is easily her most memorable since it is not only the 50th Gatornationals, but she also got to share the winner’s circle with her fiancé Bo Butner, who won Sunday’s Pro Stock title. Shipp survived a double-breakout battle against Longhany in the final and also scored wins against Dan Fletcher, and Slate Cummings, two of the most decorated sportsman racers in the field. Shipp is coming off a successful 2018 season that included three national event finals including a win in Epping.

Past national champion Ed Richardson claimed his first national event title since the 2013 season by winning a close 9.898 to 9.871 win against Carl Watts in the Super Gas final. Richardson, who is also a past winner of the Mickey Thompson Million Dollar Drag Race, marched to the final with wins over national champs Ray Connolly and Iggie Boicesco, and current points leader Ray Miller III, who fouled in the semifinals. Miller has already won a pair of Lucas Oil Series events this season, including the Baby Gators, held a week before the Amalie Motor Oil Gatornationals.

En route to the Super Street title, Doug Ramsey saved his best for last with a .005 light and an index-matching 10.905 that opponent Colby Fuller couldn’t match. Ramsey, appearing in his first national event final, was solid throughout eliminations with impressive wins against veteran Super Street racers Lamar Stevenson, Ed Pauley, and Division 1 racer Robbie Welch. Fuller got to the final by stopping Kevin Tiedemann in the semfiinals, 10.950 to a 10.929. That race was decided by Fuller’s four-hundredths advantage at the start. 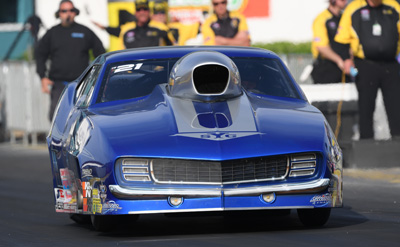 A year after winning the Division 2 Top Sportsman title, Sandy Wilkins opened the 2019 season by winning the Orlando Speed World Dragway Lucas Oil Series event and for an encore performance, he drove his 6-second Camaro to a win in Gainesville. Final round opponent Bruce Thrift ran into trouble on the starting line an had an uncharacteristically late reaction time, but it might not have mattered since Wilkins was on time with a .020 light and a 6.655 on his 6.65 dial. Wilkins was able to race for his third national event title following a semifinal win against reigning Top Sportsman champ Ronnie Proctor. Thrift made it to his first-career national event final by stopping John Taylor in the semi’s.

For the 22nd time in his career and second in Gainesville, Anthony Bertozzi picked up an NHRA national event victory. The 2002 Lucas Oil Super Stock champ, Bertozzi coasted to the title after final round opponent Steve Furr fouled by five-thousandths. Bertozzi, who qualified in the quick half of the field with his low six-second dragster, was dialed into the Christmas Tree throughout the race, including the semifinal where he used a .001 light to help stop Carson Brown. Bertozzi also matchd his 6.19 dial in his round two win over Mario Boesch. Furr, the 2010 Gainesville champ in Super Comp, stopped two-time world champ Jeff Strickland to reach the final.