The Sports Report: Late, but worth the wait 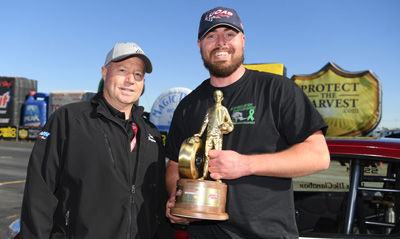 McClanahan, the 2010 Super Stock national champion, went winless at national events last season, but now has eight-career titles after downing Rick McKinney in the final round. McClanahan’s SS/BS Cobalt is one of the quickest cars in the field so he had the luxury of watching from the starting line while four of his six opponents red-lighted. McClanahan overcame a nearly-perfect light by Don Keen in the quarterfinals and then topped McKinney’s Oldsmobile in a final round that was decided by just a thousandth of a second at the finish line stripe. As a SoCal native, McClanahan was able to celebrate the victory (and his 30th birthday on Saturday), with his family and friends. 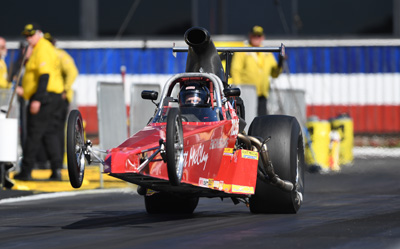 McClay, who makes his living building racing transmissions, earned his first national event win since the 2011 Auto Club Finals in Pomona by driving his Mopar-powered dragster to the Comp title. In the final round, McClay defeated Doug Lambeck, the same driver he raced the last time he won a national event Wally. By the time they reached the final, McClay had lost .16-second to CIC penalties while Lambeck was only slightly healthier with a .11-second reduction. McClay was quicker at the start by three-hundredths and powered to a (-.469) 7.721 for the win while Lambeck slowed to a (-.381) 8.449 in his Pontiac Sunfire.

Gibson joined the ranks of first-time NHRA winners in Stock after besting Duane Dickens in the final round. Gibson, in his clean D/SA ’67 Camaro, had his hands full in the late rounds with a close win against Jody Lang and a quarterfinal victory against Cody Lane, who fouled. Gibson grabbed a four-hundredths lead over Dickens to start the final and that was more than enough to insure a victory with a 10.702 on his 10.67 dial. Dickens also faced his own share of tough customers including multi-time national event winner and Division 7 champ Leo Glasbrenner in the semifinals.

Less than three months after winning the NHRA Toyota Nationals in Las Vegas last November, Wright struck again in the Super Comp class and now has four wins to his credit, three of which have come at the Pomona season-opener. Wright, a respectable 33rd in the Super Comp standings last season, was nearly unstoppable in the final round with a .001 light and an 8.908 on the 8.90 index, a run that opponent Val Torres Jr. could not match despite a solid 8.916 effort. Wright is now a perfect 4-0 in national event finals.

At the end of the 2013 season, Zak drove to his first national event title in Pomona and he returned to Auto Club Pomona Raceway to open 2019 with a second title. In his ’27-T Ford roadster, Zak motored to the winner’s circle with a slowing 10.73 after final round opponent Evan Kowalski fouled by a slim four-thousandths margin. The semifinal battle between Zak and Mike Wiblishouser was easily one of the best races of the weekend regardless of class with both cars separated by just .0005-second at the finish line stripe. Kowalski had his own tough battle in the semi’s with a 9.920 elapsed time that was enough to overcome opponent Randy Kersey’s .003 reaction time. 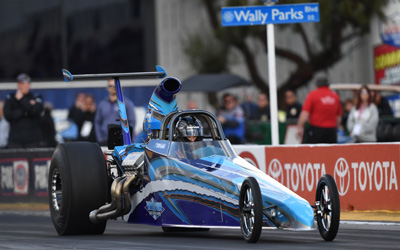 Pennsylvania’s Taylor Jr., made the long trip to Pomona pay off with a victory in Top Dragster presented by RacingRVs.com. Taylor was outstanding during the five-round battle with no reaction time worse than a .015 including a .007 in the final that he used to get the better of Zach Sackman. Taylor won the bout with a 7.105 on his 7.05 dial while Sackman, wheeling one of the quicker cars in the field, was just two-thousandths of a second behind at the finish. Despite the loss, the Illinois-based Sackman family had plenty to celebrate after Zach’s brother, Matt, reached the final round in the Top Alcohol Dragster class.

Two years after winning his first national event title in Sonoma, Smith returned to drive his Monte Carlo to a second title in Top Sportsman presented by RacingRVs.com. The Las Vegas-based Smith was also on top of his driving game including a nearly perfect .005-second package in the quarterfinals to top two-time Pomona Comp winner Jeff Gillette. Smith had to face 24-time national event winner and 1985 Super Gas national champ Mike Ferderer in the final and came away with the win by just seven-thousandths thanks to a 6.976 on his 6.96 dial.

Pomona news and notes: Pro Stock winner Bo Butner was also entered in Super Stock behind the wheel of the Grossi family’s Pontiac but his chances for a double ended in round one when he spun the tires against five-time champion Justin Lamb. … Two more Super Stock racers joined the seven-second club and both of them were wheeling COPO Camaro entries. Lane Goldstein drove his COPO to a 7.93, 173.76 in the opening round of eliminations and Ryan Priddy also posted a 7.98, 173.67 in his round three loss in the new Mountain View Racing COPO. …Fernando Cuadra Jr., the son of Pro Stock driver Fernando Sr., made his NHRA debut in the Top Sportsman class. The younger Cuadra, who is expected to join his father in Pro Stock by mid-season, qualified on the bump with an 8.05 behind the wheel of his Pontiac GXP, an ex-Mike Edwards Pro Stock car. …The new regulation that limits Top Dragster competitors to a 6.10 limit on dial-ins and a 6.00 limit on any run was tested when Brian Fitzpatrick drove his turbocharged Toyota-powered dragster to a 5.841 in eliminations. Although Fitzpatrick’s feat resulted in a disqualification from the event, he was more than happy to leave Pomona with a career-best run and his status as the driver of the world’s quickest import-powered dragster.