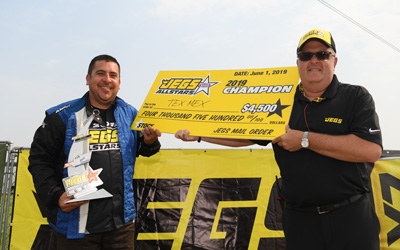 Given the level of competition that exists in the NHRA Lucas Oil Drag Racing Series, it’s a small wonder that the folks from JEGS Mail Order ever have to make good on their longstanding policy to double the winnings of any driver who can win both the JEGS Allstars and the Route 66 NHRA Nationals each season. Indeed, Allstars double-ups are rare, but not unheard of. This year, Stock racer Jeff Lopez and Top Sportsman ace Lester Johnson came close to capturing that elusive prize, but ultimately had to settle for a win and a runner-up finish.

For Lopez, high pressure situations are nothing new. He battled hard to win the Super Gas national championship in 2012 and has since become a consistent winner in Stock Eliminator with his Ace Door & Repair COPO Camaro. In addition to his two national event wins in Stock, including the 2016 U.S. Nationals, Lopez qualified to represent the Division 4 team at the JEGS Allstars, no mean feat considering his home division is also home to perennial top ten finishers including Jimmy Hidalgo, Slate Cummings, Austin Williams, Britt and Slate Cummings, and the Emmons brothers. Lopez reached the final round of Saturday’s JEGS Allstars race and his win over Division 2 racer Jeff Hairrington was a significant component that allowed the Division 4 crew to defend their overall points championship. Heading into Sunday’s final eliminations for the Route 66 Nationals, it certainly didn’t hurt Lopez’s confidence, or his net worth, to share in the $20,000 team championship bonus.

“Other than Indy, this is biggest win I’ve had,” said Lopez. “When you start racing, you have a checklist and this race id definitely on it as far as goals and we knocked it out. I’m happy the final worked out even though we had trouble with the car. In the burnout box, I had no chance. [Fellow Division 4 racer] Aaron Stanfield worked miracle just to get us to the starting line.”

The JEGS Allstars is considered one of the toughest titles to win because the event annually attracts some of the best drivers in the sport. The same can be said for the Route 66 Nationals and judging by the level of competition he faced in Joliet, Lopez isn’t likely to argue that point. A round one meeting with five-time national champion Justin Lamb is normally a recipe for disaster but Lopez managed to survive that encounter and also topped Jerry Bennett, as well as Al Corda and Jeff Strickland, who each have a pair of national championships to their credit.

Lopez’s odds to complete the double went up after he hammered the Tree in the final with a nearly-perfect .007 light against Randi Lyn Shipp, but a seven-thousandths breakout resulted in a win for Shipp, the seventh of her remarkable career and her second this season. Shipp also didn’t need to be reminded that she’d previously lost to Lopez in the final of the 2017 Topeka race. 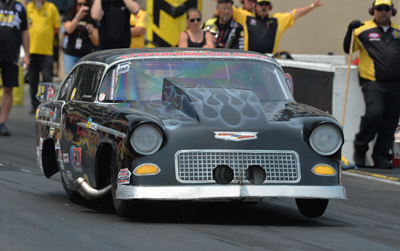 Johnson’s situation in Top Sportsman presented by Racing RVs.com was only slightly different from Lopez’s and his final results in Chicago were equally rewarding. Last year, Johnson had his first shot to complete the JEGS Allstars/Route 66 Nationals double and he nearly pulled if off. Driving his wild supercharged ’55 Chevy, one of the wildest cars in the Top Sportsman class, Johnson won the JEGS Allstars and then reached Sunday’s final round. His chances for a double ended in heartbreak when he made a move towards the centerline and brushed the timing block with his exhaust header.

In his return to Route 66 Raceway, Johnson was able to put the frustration of 2018 behind him. He went to the final of the Allstars for the second-straight year before losing a close battle against Kynon Dinke’s Camaro. More motivated than frustrated, he redoubled his efforts on Sunday and won the Route 66 Nationals title. In the final, Johnson ran right on his 6.18 dial to stop Brandon Baxter making his ’55 Chevy one of the quickest cars ever to win a Top Sportsman race.

“We flip-flopped from last year so next time I’ve got to [win] both of these races,” said Johnson. “To be honest, we had trouble all weekend. I was under the car in the rain fixing a transmission but if you know me, you know I don’t give up. After last year, I wanted this one very badly.

The best of the rest: Greg Kamplain is now an eight-time national event winner following his most recent win at Route 66 Raceway. Facing one of the toughest Comp fields of the year, Kamplain wheeled his C/DA to a final round victory against the F/AA Cavalier of JEGS Allstars rep Van Puckett. Kamplain had lost just .03-second from his index by the time he got to the final and that helped him get past Puckett who was down 11-hundredths. The final numbers favored Kamplain with a (-.563) 7.53 to Puckett’s (-.493) 7.937.

During Saturday’s JEGS Allstars race, five-time national champion Justin Lamb got the best of Division 4 rep Vic Penrod in their opening round battle. The duo met again a day later in the Route 66 Nationals final and Penrod evened the score after a Lamb fouled. Penrod’s vintage ’69 Camaro was nearly unstoppable during eliminations with wins against low qualifier Jason DeForrest and Jeff Dona, who entered the day as the favorite after winning the Allstars title. Penrod’s only other national event victory came at the Texas Motorplex in 2006, when he defeated David Bogner in the Super Stock final. 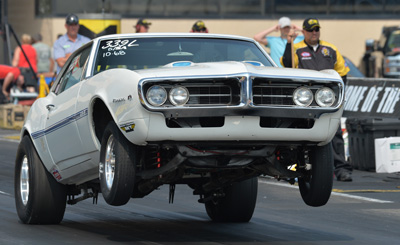 As the fiancée of Pro Stock champ Bo Butner, Randi Lyn Shipp races in almost all of the NHRA Mello Yello series events and she more than holds her own against the toughest competition from coast to coast. Earlier this year, Shipp and Butner shared the winner’s circle at the 50th Amalie Motor Oil Gatornationals and now she’s got seven career wins, all of them in Stock after beating Lopez in the final.

En route to his second national event win in Super Comp, Dave Dahlem scored a memorable round one win over Dan Fletcher where both drivers recorded perfect 8.900 elapsed times. Dahlem turned on the win light thanks to a .008 to .019 lead at the start. Fletcher wasn’t the only one of Dahlem’s opponents to run 8.900. semifinal foe Craig Anderson was also perfect and so was final round opponent Megan Strassweg, who red-lighted by four-thousandths.

Reigning Lucas Oil Super Gas champ Devin Isenhower made the final round in Chicago but was turned away by Nathan Vrooman in a 9.898 to 9.887 double-breakout battle. Vrooman, the 2012 Norwalk winner, reached the final after wins against low qualifier Larry Bernhausen, Rodney Benson, and Randy Nygaard. Vrooman’s best run came against Bernhausen, where he coupled a .013 light and a 9.903 in his ’91 Chevy Beretta. 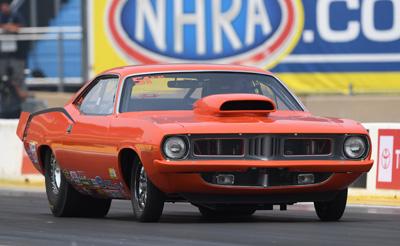 Division 5 champ Rodger Sauder lost a tough battle against Cy Hill in the opening round of Super Street at the JEGS Allstars but he quickly regrouped and drove his ’72 Barracuda to a win on Sunday. Sauder finished off his first national event title with a .020 light and a 10.917 to stop Wayne Christopher, who was close behind with a .022 light and a 10.934. Sauder’s road to the final also included a win against Hill.

In Top Dragster presented by Racing RVs.com, Jim Prevo saved his best performance for last with a .005 light and a 6.337 on his 6.33 dial. and needed it against two-time national champ Jeff Strickland, who broke out by .011-second in the final round. Prevo’s earlier wins also came against well-known opponents including Anthony Bertozzi and recent Zach Sackman, last year’s sixth-ranked Top Dragster driver.