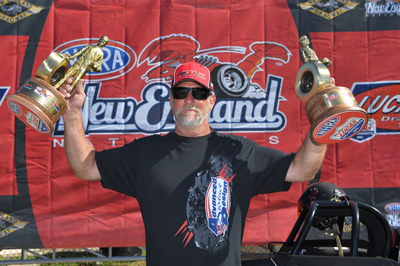 It may not be as impressive as the parting of the Red Sea, but what Ken Moses accomplished at the NHRA New England Nationals could just as easily be described as a miracle. Moses, a part of the Division 1 landscape for more than three decades, joined an exclusive fraternity when he doubled-up at the NHRA New England Nationals. Moses defeated reigning Division 1 champion Kyle Bigley in the Super Comp final and then returned a few moments later to finish off the 11-round marathon by beating Nick Meloni for the win in Top Dragster presented by Racing RVs.com. Moses is the 26th different driver to double-up, a feat that has been accomplished 40 times since 1991.

“This feels good,” said Moses. “It’s totally different for me to run two cars and go that far. I have to thank my wife, Debra. I stole her Super Comp car this weekend. Actually, I borrowed it, but I might just keep it. This was a really good weekend because my family and friends were here to cheer me on and take care of things. We had problems with our Top Dragster car before the final and they told me to just go run the Super Comp final and they’d all take care if it. I knew when I got back it would all be fixed. It was a team effort.” 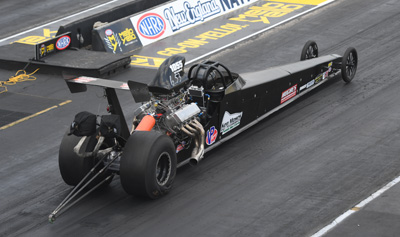 Moses won his first national event title in 1985 when he bagged the Super Comp crown in Atlanta. Nearly 30 years later, he earned another Wally in Top Dragster at the 2013 Charlotte Four-Wide race. Moses ran an 8.909 in the semifinals of Super Comp to push Jack Sepanek into an 8.897 breakout and then he won the final against reigning Division 1 champ Kyle Bigley in a double breakout, 8.894 to 8.875. Moses’ path to the Top Dragster title included wins against Val DiGenova, Al Kenny, and Nick Meloni in the final. Moses was away from the starting line first and sealed the historic feat with a 6.547 on his 6.52 dial.

For almost any driver who chooses to race two cars, there is an adjustment in driving style from car to car, especially when going from Top Dragster to Super Comp, two classes that can differ greatly when it comes to starting line routine, and finish line driving. As he noted, Moses does not double-enter often, but he managed to remain focused in Epping, even during the hectic late rounds. 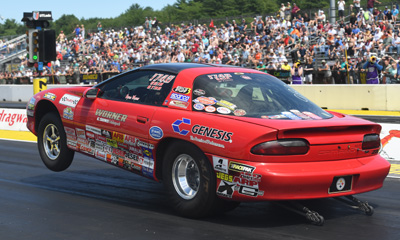 The best of the rest: Byron Worner, the 2013 Super Stock national champ, connected for his seventh national event win after driving his Camaro to a final round win against Richard Kay, who encountered a mechanical problem that ended the race prematurely. Two years ago, Worner won in Epping by beating his twin brother, Bryan, in the final round. This time, Byron Worner raced good friend Herbie Null Jr. in the quarterfinals and then stopped Marty Rinehart in the semi’s with a tidy package that included a .009 light and a 9.852 on his 9.84 dial. After the final, Worner quickly dedicated the win to an aunt he recently lost and to fellow NHRA class racer Mickey Whaley, who passed away last week. 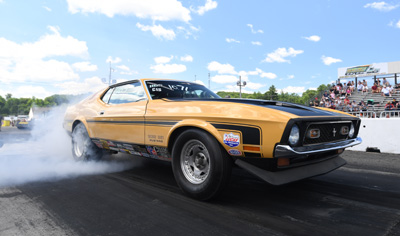 Funny Car racer Bob Tasca III isn’t the only Mustang driver from Rhode Island who’s enjoyed success lately. Dean Cook, who won the Stock title in Englishtown in 1983, collected his second win after driving his C/Stock ’71 Mustang to victory. Cook, who attributed his good fortune to a four-leaf clover he found at New England Dragway, defeated his son, Dean II, in the third round and later defeated Lenny Williams in a race decided by just .0007-second at the stripe. The final was also extremely close with just .007-second separating Cook from Angelo DiTocco, who was seeking his first national event win since 1998. DiTocco earned a spot in the final when he cooled off one of the hottest drivers in the sport, Joe Santangelo, who is ranked third in both Stock and Super Stock. 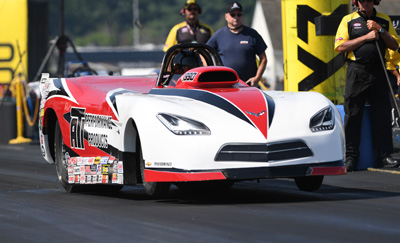 No one wins a national championship and two U.S. Nationals titles without perseverance, so it wasn’t a big shock when Iggie Boicesco earned national event win No. 9 in Epping. Boicesco and his daughter, Amanda, who races in Super Comp, have endured a tough summer that has included three broken engines. That didn’t prevent the 2006 national champion from earning the win in his ATI-backed Corvette roadster. Boicesco moved in to the top ten after his latest win, was solid throughout eliminations including a .001-light in round two and a 9.907 pass in the semifinals was at his best in the final round with a perfect 9.900 that his opponent, Canadian John McClean, could not match. 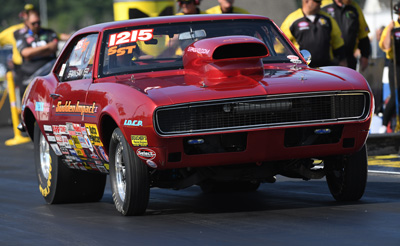 Brian Sawyer, the son of 2005 Super Gas national champ Ray Sawyer and brother of seven-time national event winner Mike Sawyer, has competed in just three NHRA national events during his career and all three have been at New England Dragway, his home track. Sawyer has also appeared in the final round of all three races and upped his average to two wins and a runner-up by beating Darren Wood in the final Super Street final, 10.902 to 10.944. Sawyer, who won the Epping race in his 2017 debut, also scored wins against Martin Ganjoin and Maine’s Cory Prindall. After the final, Sawyer joked that he’d forgotten to thank his mother after his first national event win, so he was eager to have a second chance to correct the mistake. 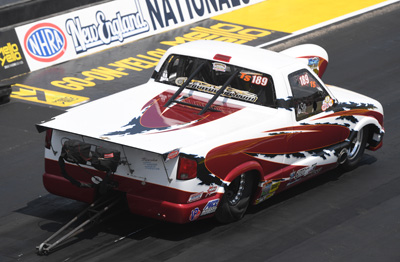 Dave Miller made his NHRA Pro Stock debut recently at the Summit Racing Equipment Nationals in Norwalk and it turns out that might not be the most exciting thing to happen to him this month. Miller didn’t qualify in his Pro Stock debut, but after returning to the seat of his six-second Chevy S-10 pickup truck, he was able to claim his first victory in Top Sportsman presented by Racing RVs.com. Miller had been past the first round just once in five previous starts this season but turned in a sold effort in Epping including his final round race against Richard Lachapelle. Miller won the bout on a small holeshot, with his 6.937 on a 6.90 dial winning out over his opponent’s 7.709 on a 7.68. On his way to the final, Miller also had a tough battle against Johnny Brooks’ show-quality Chevy II, and a close win against Nick Willard.