The Sports Report: The Full Monty

After a near-double in Charlotte at the Four-Wide event, Monty Bogan’s success continued with a victory in Thunder Valley
19 Jun 2019
Kevin McKenna, NHRA National Dragster Senior Editor
The Sports Report 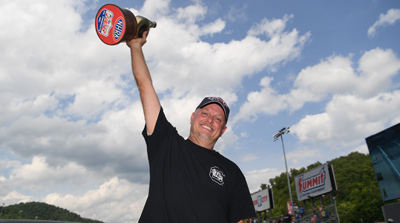 To suggest that Monty Bogan’s 2019 season has been successful would be a serious understatement. A decade removed from his most recent national event victory at the Texas Motorplex in 2009, Bogan returned to the NHRA stage in a big way this season with a pair of wins and three final rounds. Following a near-double at the NHRA Four-Wide Nationals, where he posted a win in Super Stock and a runner-up finish in Stock, Bogan struck gold again in Bristol, where he claimed the Stock title in his D/SA ’67 Camaro.

Bogan now has four wins in six final rounds and a common thread that binds all of them is his knack for drawing the toughest opponent possible in the final. The line-up that Bogan has had to face includes seven-time national champion Peter Biondo, four-time champ Kevin Helms (twice), past Stock champ Joe Santangelo, and Pro Stock ace Drew Skillman. In Bristol, that trend continued when Bogan found himself paired with veteran Mike Cotten in the final.

Not surprisingly, the final was decided by just a thousandth of a second with Bogan leaving first with a .010 light and turning on the win light with an11.094 on his 11.10 dial. Cotten, a former AHRA series champ who raced in his first NHRA final in 1984 and has since appeared in six more, was sharp with a .019 light, and an 11.173 on his 11.18 predicton.

“That was close,” Bogan said during his post-race interview on the Bristol Dragway return road. “Mike had been on it all day. I told him that at the finish line. He was driving great, so I knew I had to be on it. In Charlotte, I made a bad mistake in the final of Stock so this time I wasn’t going to be late. I felt like I drove the finish line well, and the car was great all weekend. This is awesome.” 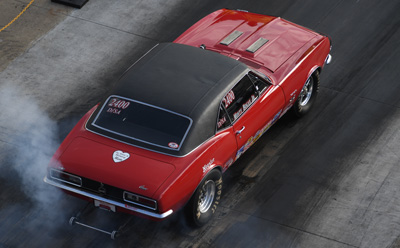 Bogan’s path to the final round could best be described as an adventure. While his first two opponents each fouled out, Bogan had to work hard for his round three battle against Ricky Pennington. In another double breakout, Bogan was aided by a .006 light. Racing against Chip Johnson in the quarterfinals, Bogan caught a break when the Atlanta champ slowed. Bogan sealed his invitation to the final after a solid performance in the semifinals against Marcus Widuch.

A decade ago, Bogan used to race just about every weekend and was essentially a touring pro sportsman racer in the mold of Dan Fletcher and David Rampy. He won more than his share of events in both NHRA and IHRA competition. These days, he’s family man with a career as a service manager at a local Kia dealership near his hometown of Boiling Springs, S.C. As such, he races for fun, and when time permits.

Other than his win in Charlotte, Bogan hasn’t had much in the way of results in the Super Stock class, but after a pair of final rounds in Stock, he’s got the potential for a top ten finish. With just one Lucas Oil Series divisional event on his scorecard, Bogan is ranked No. 34 out of the more than 700 drivers who have competed in Stock this season. Even though that potential exists, Bogan doesn’t plan to pursue it.

“I love my time at home with my family,” he said. “Don't get me wrong, I love my time at the racetrack, too. The days of me traveling 14, 15 hours to a race, I don't miss that part at all. I don't have to worry about points, I'm not trying to win a championship.” 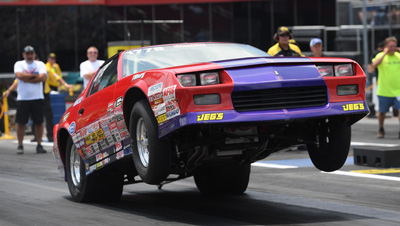 The best of the rest: Bogan wasn’t the only driver to win his second event of the season in Bristol. Joe Santangelo II continued his recent hot streak in Super Stock with a final round win over Ricky Decker in a battle of past national champions. Santangelo won the Richmond event at the end of May and ironically, he was in the Super Stock final against Bogan in Charlotte. In the final, Santangelo used a 10.282 on his 10.27 dial to win by five-thousandths. With the season approaching the half-way point, Santangelo has set himself up for a run at a second Lucas Oil Series championship. In national event competition, he has a nearly perfect scorecard with two wins and a runner-up. On the divisional side, he’s competed in just two events and has a quarterfinal and a round three finish to his credit. 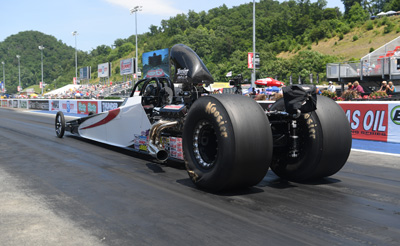 Todd “Bones” Ewing collected his eighth national event Wally and first since 2017 after he beat Ray Miller Jr. in the Super Comp final. Ewing, who has wins in Super Comp, Super Stock, and Top Dragster, got a free pass in the final after Miller broke an engine in the semifinals and was unable to repair the damage. From the start, Ewing had his hands full with a round one race against Miller’s son, Ray III, the current points leader in Super Comp. Ewing also survived an impossibly close semifinal battle against four-time national event winner Lauren Freer. Ewing gave up a slight lead at the start but won by an 8.922 to 8.928 count in a race decided by .0004-second at the finish line. 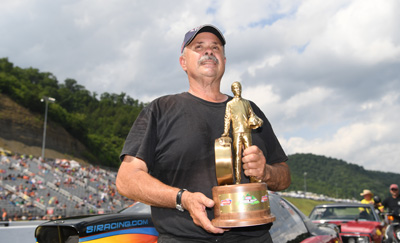 Ray Sawyer, the 2005 NHRA Super Gas champ, celebrated Father’s Day with a present to himself after winning his seventh national event title. Wheeling his ’02 Camaro, Sawyer grabbed a two-hundredths lead against Michelle Furr in the final round and held on for a 9.927 to 9.929 victory. Sawyer, who last won a national event at the 2015 Epping race, earned his way into the final with wins against fellow national champ Jim Perry and seven-time Division 1 champ Tom Stalba. Sawyer’s race against Stalba was one of his most competitive with both racers right on the 9.90 index. 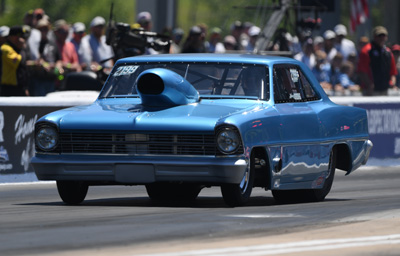 Johnny Brooks’ classic ’67 Chevy II attracted a lot of attention from the Bristol fans thanks to its clean lines and show quality paint and it also proved to be an effective race car by winning in Top Sportsman presented by Racing RVs.com. Brooks got a huge head-start in the final round against Dylan Stott’s six-second Mustang but was able to hold on for his first NHRA win by running 7.953 on his 7.95 dial. Stott was not far behind with a 6.714 against his 6.69 prediction. Brooks earned a bye in the semi’s but wouldn’t have gotten there if not for key wins against Tyler Caheely and Jackie Robison earlier in the day.