After Kyle Fickler celebrated the end of a long winless drought in Topeka, he generously reached out to help an old friend.
12 Jun 2019
Kevin McKenna, NHRA National Dragster Senior Editor
The Sports Report 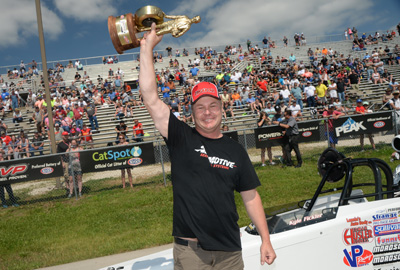 Kyle Fickler won his first national event title in Dallas in the Fall of 2003 and when he turned on the win light in the final of the Menards NHRA Heartland Nationals presented by Minties, he couldn’t help but take a trip down memory lane.

“When I won that race in 2003, my wife, Debra, was pregnant with our daughter, Danika, and Danika is now 5-foot 6-inches, so I prefer to measure it in height, rather than years,” said Fickler. “We also honeymooned here [in Topeka] almost 26 years ago and have unlimited fond memories of racing here.”

Fickler, who works as the Director of Business Development at Aeromotive Fuel Systems and is a member of the SEMA Board of Directors, created another lasting memory when he drove his dragster to a close final round win over Vernon Rowland in the final. Rowland was four-thousandths of a second quicker at the start but broke out by a thousandth of a second while Fickler won with a safe 8.913. Fickler also stopped Topeka Super Street winner Trevor Larson and Mark Grame, last year’s No. 4 ranked driver en route to the victory. Against Grame, Fickler had to overcome a nearly-perfect .001 light, and did so with an 8.911.

What Fickler did behind the wheel of his race car was memorable, but what he did afterwards is what most people will remember about his latest victory. Quick to help out a friend in need, and quick not to forget those who have helped him in the past, Fickler made a kind gesture towards old friend and mentor, Sheldon Gecker, a pioneer of the Super-class movement, and the Super Gas national champion in 1987 and 1999.

“This is for Sheldon Gecker,” he said. “He lost his Super Comp car in a fire a few weeks ago so my entire winnings check from NHRA is going to him and his wife, Crystal. I called him this morning and his phone went straight to voicemail. He tried to call me back three times before we finally connected. That’s’ just the type of guy he is. I wouldn’t be here today without him telling me the things he’s been telling me for 20 years. I just stuck this time.” 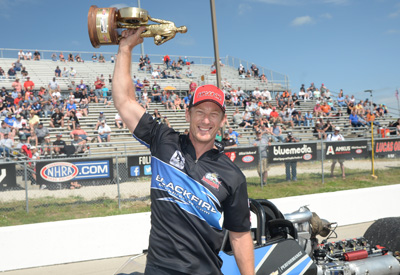 The best of the rest: Most weekends, race fans catch Bruno Massel in his “day job” as a pit reporter on the Fox Sports broadcasts of NHRA events. Massel also happens to be a pretty good driver and he’s now got 13 national event wins and a pair of world championships to validate it. Racing his I/Drgaster against a strong field, Massel qualified No. 5 and managed to avoid a significant index hit on his way to the final. When he raced Shawn Vincent in the final, Massel was only down .03-second while Vincent was down .04-second in his C/TA Chevy S-10. The indexes became somewhat irrelevant after Massel grabbed a huge lead at the start with a .005 light and powered to the title with a (-.486) 6.764. Vincent was quicker with a (-.536) 8.404 but couldn’t hold off Massel’s tiny Blackfire dragster, which is powered by a tiny 135-cid engine with a turbocharger. 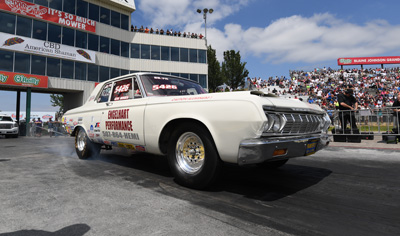 In a span of seven days, Vic Penrod came within a whisker of winning two national event titles. Penrod won in Super Stock in Chicago and then made the trip to Heartland Motorsports Park, where he reached the final again and lost to Gene Mosbek, who celebrated his 65th birthday in style with his sixth-career national event win and second in Topeka. Driving an ultra-rare aluminum-nosed ’64 Plymouth Savoy, Mosbek saved his best performance for last with a .001 light and a 10.234 on his 10.22 dial that Penrod couldn’t match. Mosbek raced some of the toughest opponents on the property on his way to the final including Super Comp ringer Christopher Dodd, recent Houston winner Jacob Pitt, and past Division 5 champ Michael Mans.

Chris Chaney’s A/SA ’69 Camaro bears the No. 51, which signifies his 2018 Division 5 championship and he is off to a quick start this season with a semifinal finish in last week’s Route 66 Nationals in Chicago and a victory in Topeka. Chaney won the final round with a 10.215 on his 10.21 dial, but avoided having to make a decision at the finish line after opponent Scott Libersher fouled by two-thousandths. Chaney had a bye in the semifinals but earlier drove past five-time world champ Justin Lamb and past national event winner and National Dragster columnist Brenda Grubbs. Chaney now has four national event wins including the 2011 Topeka Super Stock title. 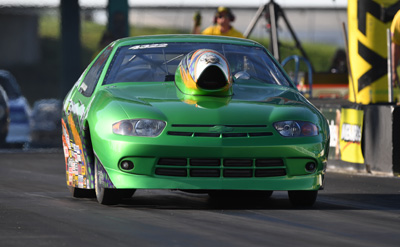 Much like Super Comp champ Fickler, Super Gas winner Shawn Carter also broke a lengthy winless drought in Topeka when he defeated Collin Becker in the final round. Carter’s last national event win came at the 2007 Dallas race. Driving his ’05 Cavalier, Carter was wheel to wheel with Becker in the final and survived a close 9.896 to 9.888 double breakout. Carter prepared for the final round with wins against two-time Topeka winner James Kunkel, Norman Brungardt, George Meyer, and Shannon Brinkley. Ironically, the Heartland Nationals was Carter’s first appearance of the season in NHRA competition.

After six wins in Super Comp and Super Gas, Trevor Larson claimed his first win in Super Street after fellow Minnesota resident Mike Campbell fouled by a thousandth of a second in the final. Larson, coming off a very competitive run in his semifinal win over Jason Hennessey, was strong in the final with a .016 light and a 10.853 in his ’90 Corvette. Larson opened eliminations with a perfect 10.900 pass which put him on the ladder for a bye run in the third round. Later in eliminations, he stopped Andrew Withers with a 10.910.