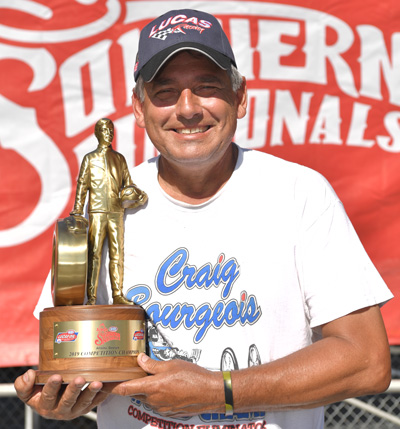 In last week’s edition of The Sports Report, we detailed the fast start by Super Comp ace Ray Miller III and his prospects of winning the Lucas Oil Series national championship. Although the calendar only recently turned to May, the same buzz now surrounds Division 4 Comp racer Craig Bourgeois, who has put himself in a favorite’s role following his most recent win at the Arby’s NHRA Southern Nationals. After beating Brian Browell in the final round, Bourgeois, of Metairie, La., has four wins and a runner-up in his first five appearances of the 2019 season and he’s built up a sizable lead in the standings.

So far this season, Bourgeois has national event wins in Gainesville and Atlanta. He also swept both ends of the South Central Division Lucas Oil Series double-header at the Texas Motorplex and was a runner-up at the Division 4 event in Houston. All told, he’s 23-1 in elimination rounds this season and the only blemish on an otherwise perfect record is a final round red-light against Keith Mawhee in Houston.

“When you’re on a tear you feel like you can win on anything, even a pogo stick,” said Bourgeois. “With the support I have behind me, I feel like I can’t lose. At the first race of the year, I ran Keith Mawhee in the final and he’s a good racer, but I was confident that I had him. I messed up and red-lighted because I got distracted. After that, we fixed a problem with the throttle and I haven’t lost since. I feel like I’m going to wake-up soon and realize it was all a dream."

Earlier this year, former Comp and current Pro Stock racer Rodger Brodgon announced a huge bonus program that totals $150,000 at Division 4 events. So far, Bourgeois has been its biggest beneficiary with two wins in three finals. The additional money has also brought increased competition. The Dallas double-header featured a strong 39-car field that included some of the best cars in the country. That didn’t stop Bourgeois from sweeping both races with his injected small block front engine dragster, and he did so without incurring a permanent index penalty.

“The double-header in Dallas was really a surprise,” said Bourgeois. “I usually don’t do well in cool weather, but we went in there and won both of them; that’s when you know you must be doing something right. And, to get through the first five races without hitting my index. That doesn’t’ happen very often, either. We even went to Gainesville and won the Gatornationals. I wasn’t going to go but my traveling partner [Top Dragster racer] Mark Jones wanted to go and I’m glad we did because we won it. It’s been weird, but I’ve been really blessed this season.” 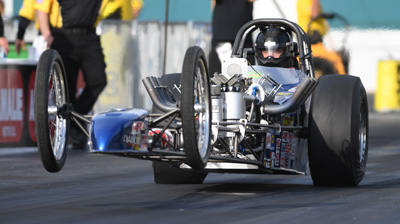 In Atlanta, Bourgeois faced a light 16-car field but the competition was fierce with 100-time national event winner David Rampy, three-time Indy winner Brad Plourd, and past national event winners Glen Treadwell, Van Puckett, Randy Daniels, and Browell all in the mix. Bourgeois had lost .07-second to CIC penalties by the time he reached the final while Browell was clean. Bourgeois was able to take the win thanks to a .036-second starting line advantage.

“I gave myself a one or maybe two in ten chance of winning that final,” said Bourgeois. “Brian was quicker than me and he is a good driver. I just tried to cut a decent light and hope he made a mistake. He did fall off a bit and I was just able to catch him. I could only run .50-under. That’s all I had but when we got to the 1,100-foot mark, I knew I had him.

Unlike Miller, Bourgeois has already won a championship. He was the top points-earner in Comp in 2015. That year, Bourgeois finished with 698 points after posting six wins in 11 final rounds between national and divisional events. Even with that monstrous score, Bourgeois only managed to hold off second-place Arnie Martel by 12-points. For comparison, 2018 champ Frank Aragona Jr. needed just 613 points to seal the deal. Regardless of the numbers, Bourgeois isn’t about to take anything for granted. He just plans to ride the wave as long as it continues.

“My motor is a little tired from all the runs we’ve put on it this year so we’re going to freshen it before going to Chicago for the [JEGS Allstars],” said Bourgeois. “I’ve learned a lot from winning a championship and from the years of bracket racing experience I have. I think I’d feel a lot more pressure if I’d never won a championship before. There are a lot of racers in Division 1 and Division 3 that are just getting started. Still, when you have a start like this you have to pursue it. I wouldn’t be here without the support of my family and my crew, Jimmy Dunn, Greg Shank, Mark Jones, his wife, Kelly, and his brother, Warren. I also have some great companies behind me like Mickey Thompson, Fel-Pro, A1 converters, Lucas Oil, and CFE. I can’t wait to see what the rest of the year brings.” 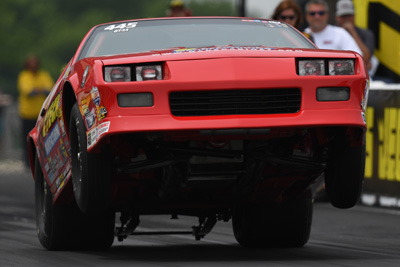 The best of the rest: At this point, it seems almost a certainty that Aaron Stanfield will one day join his father, Greg, as an NHRA national champion and that day may come sooner than later. Stanfield’s latest victory came in Super Stock where he drove his family’s prized Camaro to a final round win over fellow Division 4 racer Brandon Bakies. Stanfield won the final by just a thousandth of a second with a 9.858 on his 9.84 dial. He also survived a tough battle in the quarterfinals where his .002 reaction time matched-up against the .003 of Larry Cummings, who ultimately slowed. Stanfield now has five national event wins to his credit, three in Super Stock and two in Top Dragster. He’s currently ranked in the top five in both classes.

Chip Johnson has been a successful sportsman racer for decades and his achievements include an IHRA series championship and he finally broke through for his first NHRA victory after driving to the Atlanta Stock title. Johnson won the final after his North Carolina neighbor Jeff Warren red-lighted in the all-COPO Camaro final round. Johnson’s path to the final included battles against four-time national champion Jeff Taylor, past Division 2 champ Robbie Shaw, and a semifinal race against Jim Marshall. In that bout, Johnson ran a perfect 9.680 on his 9.68 dial for the win.

The town of Raceland, La. Celebrated it’s second NHRA national event title in less than a month after Trene Cressonie won the Super Comp title in Atlanta. Last month, fellow Raceland resident Ross Laris claimed the Top Dragster win in Houston. Cressonie cruised to the title after final round opponent Shannon Brinkley red-lighted but he would have been tough regardless with a .008 light. Cressonie also got a free pass in the third round when current points leader Ray Miller III red-lighted. Brinkley was in his second final in as many weeks after a runner-up finish at the Four-Wide event in Charlotte. 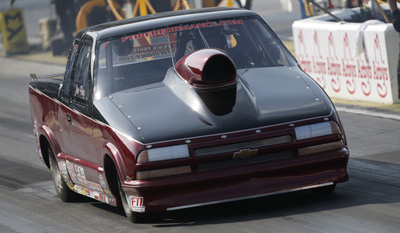 Jim Perry, the 2009 NHRA Super Gas national champion, earned his sixth national event title by stopping Rich Price in the final round. Perry, in his S-10 pickup truck, got the best of a double-breakout against Rich Price, 9.894 to 9.893. Perry was solid throughout eliminations including a .009 light and a 9.910 in his quarterfinal win over Jeff Webb. Price was also impressive with a pair of perfect 9.900 runs in back-to-back rounds late in eliminations.

There was a first-time winner in Top Dragster presented by Racing RVs.com after Clint Riley stopped veteran Steve Cohen in the final round. Once again, the final was decided by a red-light with Cohen leaving too soon by four-thousandths of a second. Running in the 7.3’s, Riley had one of the slowest cars in the class, but he was also one of the most consistent with wins against Houston champ Ross Laris and Mark Jones, who were both among the quickest drivers in the class in Atlanta.