The Sports Report: Buy on Friday, win on Sunday 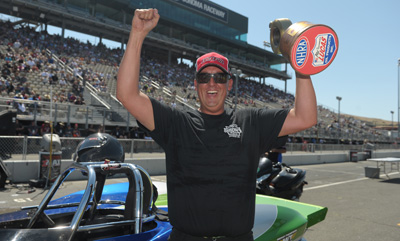 NHRA fans know Bo Butner as the 2017 Mello Yello Pro Stock champion, but during the week, he’s a used car salesman, and a pretty good one at that. That might help explain how Butner was able to purchase Aaron Kinard’s entire Super Gas operation, including his race car, motorhome, trailer, and spare parts, and then drive to a victory just days later at the NHRA Sonoma Nationals. Never mind that Butner had never driven Kinard’s ’63 Corvette, or even entered a Super Gas race for that matter. He was able to more than hold his own against some of the best competition the West Coast has to offer.

Following a red-light start in the semifinals of Pro Stock, Butner resumed his quest for the Super Gas title and sealed the deal with a victory against first-time finalists Linzi Meserve, 9.949 to 9.963. Butner had a competitive .021 light in the final. Earlier in eliminations, he beat George Scott with a brilliant .015 light and a 9.904, and also stopped national champion Steve Williams en route to his 27th career victory.

“I knew coming into this that the car was good. I’m very happy with it,” said Butner, who has now won in six different categories: Pro Stock, Comp, Super Stock, Stock, Super Street, and Super Gas. Only seven drivers have ever accomplished the feat. “I’m entered for next week in Seattle; but you ask yourself, do you race it or do you be one and done and perfect?”

Although he is new to Super Gas, Butner knew what he was getting when he purchased Kinard’s car. In addition to his No. 2 finish in the Super Gas standings last season, Kinard was also the Division 7 representative in the JEGS Allstars this season. For his debut in Sonoma, Butner called in a few reinforcements, including Kyle Seipel, Justin Lamb, and Peter Biondo, to help him dial the car. “One of my friends, Ron Erks, had this car back in 2000, and he won the world championship with it,” Butner said. “Aaron Kinard kept it good and maybe even made it better. Really, I felt like we were very lucky this weekend, but the guys helping me, like Kyle Seipel, Justin Lamb, Pete Biondo – all those guys. They’re some of the world’s best ever, and I have a lot of faith in them. Randi Lyn [Shipp, fiancée] is doing her own math, and she’s right there with them on what to dial. I feel very confident with all that help. It’s a good feeling. They had it done right.”

Following his Sonoma win, Butner faces a slight dilemma. Should he retire from Super Gas competition with an unblemished record? He’s already made the decision to race in Seattle so that’s not happening. After that, is the car for sale, and if so, did the price go up or down following Sonoma?

“I don’t know, that’s a good question,” Butner said. “Of course, everything is for sale if the price is right. It’s actually a lot of fun to drive two cars and it keeps my mind off of other stuff. I might just keep it for a while. We’ll see.” 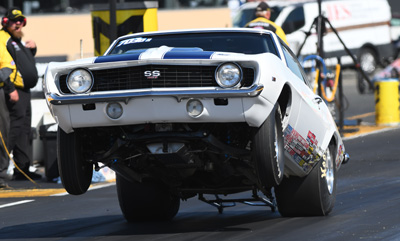 The best of the rest: Kyle Rizzoli made a deep run in both Stock and Super Stock in Sonoma, and cashed in Super Stock when he drove Jim Whiteley's Camaro to a final round win against Jon Irving. Rizzoli, a past division champion and now seven-time national event winner, won the final with a 9.592 on his 9.57 dial after Irving broke out by four-thousandths. Rizzoli also survived a close battle with Chuck Stubeck in round two, and topped Rodger Comstock’s quick Cobra Jet Mustang in the quarterfinals. 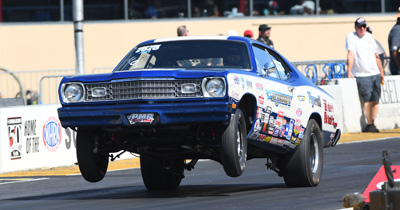 There was a first-time winner in Stock after Mark Kirby turned on the win light in the final round against Jeff Jerome, who fouled. Kirby, in his F/SA ’73 Duster, had to feel good about his chances after opening eliminations with a .001 light against round one opponent Cliff Hanson and then winning a tough round two battle against five-time world champion Justin Lamb. Kirby also kept Super Stock champ Rizzoli from a possible double in the quarterfinals. A week before scoring his first national event victory, Kirby was a runner-up at the Division 7 Lucas Oil Series double-header in Sonoma. 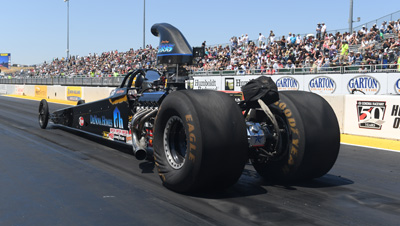 Justin Morgan, who won Super Comp title in Las Vegas in 2011 and 2013, added a third national event to his total by winning in Sonoma. Morgan used a .011 light and an 8.918 to seal the win against Kevin Motter, who broke out by two-thousandths. Morgan’s path to the final round included wins against both Travis and Tanner Theobald and a semifinal victory against Lori Warden. Motter also did not have an easy time getting to the final including a tough double-breakout battle against multi-time national event winner Ken Mostowich in the semifinals. 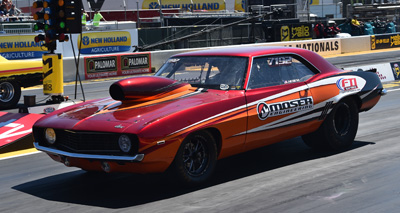 Over the last decade, Ryan Herem has won five national events in Super Comp and Super Gas and he’s now added a Super Street title to his resumé after defeating Mark Simonian in the final. Herem saved his best performance for last with a .006 light and a 10.909 that forced Simonian into a 10.882 breakout. Herem also overcame John Bycroft’s perfect .000 light in round two with a solid package that included a .009 light and a 10.913. Herem competed in the Division 7 double-header a week before the Sonoma national event but lost early in both races. Steve Galileo earned his second win in ten days in Top Sportsman presented by Racing RVs.com following a double-breakout win against Rich Okerman in the final. Galileo won the first event in the Division 7 double-header and then finished off his memorable two-week stay in Sonoma with a double-breakout win against Okerman. Galileo turned on the win light with a 6.959 on his 6.96 dial while Okerman broke out by four-thousandths. On his way to the final, Galileo, who also beat national champ Mike Ferderer and Don Meziere in eliminations, was extremely consistent with four reaction times between .014 and .019. Okerman raced to his fifth national event final following a tough semifinal win over Monte Green. 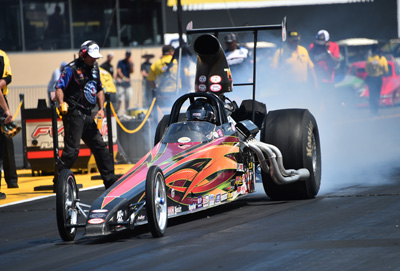 The final in Top Dragster presented by Racing RVs.com between George Prather and Phil Unruh was shaping up to be a great battle after both drivers left the starting line within a few thousandths of each other but Unruh’s Corvette slowed at half-track and Prather, a runner-up in Sonoma in 2013, was able to secure his first national event title. Prather’s driving was solid throughout eliminations especially the first two rounds where he defeated John Richardson and Paul Gladden. Unruh, looking for his seventh national event title, reached his 12th national event final by beating Bobby Ray McMahan.