The Sports Report: The best final round of the year?

At the Dodge NHRA Nationals presented by Pennzoil, Ray Miller III defeated Evan Kowalski in what can only be described as the best final round of the 2019 season, regardless of class.
06 Nov 2019
Kevin McKenna, NHRA National Dragster Senior Editor
The Sports Report 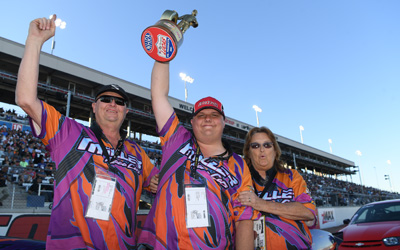 Unless you’ve been there, and few have, it’s hard to imagine the plight of Las Vegas Super Gas runner-up Evan Kowalski. The winner of the 2017 Sonoma event, Kowalski is one of the West Coast’s most successful Super Class racers and when he reached the final round of the Dodge NHRA Nationals against championship contender Ray Miller III, most expected a spirited and competitive battle. What they got was the best final round of the season, regardless of class. Kowalski, racing in his second national event final of the year, was razor sharp on both ends of the track with a .002 reaction time and a 10.056 against the 10.05 altitude adjusted index. The only thing missing from an otherwise flawless performance was the win light which shone in Miller’s lane because he was even more flawless with a .001 light and a 10.053. As kids today like to say, Kowalski’s eight-pack was no good against Miller’s four-pack. Or Kowalski was “Wasting fuel in the final with an 8-pack,” as he wrote on his Instagram page.

As for Miller, the Las Vegas win was just another shining moment in a season that has been full of them. Miller’s 2019 campaign would make any sportsman racer insanely jealous with seven wins in eight final rounds across both Super Comp and Super Gas eliminators. Miller is the runaway points leader in Super Comp after his four-win season and is the likely favorite to land the No. 1 spot. He is also still in the running for the title in Super Gas, even though his latest victory in Las Vegas did not count towards his points total.

“That was an unreal final,” said Miller. “To be eight total and [lose to] a four-thousandths pack is something that doesn’t happen every day. As for the championship, I need do some good next weekend [at the Division 7 event in Las Vegas] in this one [Super Gas] and hopefully can seal it up in Pomona in Super Comp.” 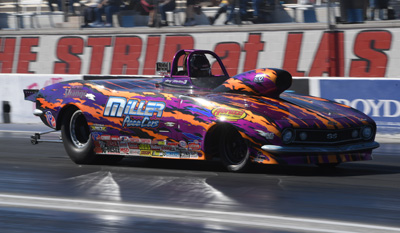 Miller later added the following on his Facebook page, “Thanks to everyone for the calls, texts and Facebook messages. This has definitely been an unbelievable season that you dream of having. What an epic final round with Evan Kowalski, congrats to him on the runner up. [We’ve] got a couple more weeks until we close the year out and hopefully, we can finish strong. Thanks to my family and all the great companies/people that make this possible; Miller Race Cars, Strange Engineering, Mickey Thompson Tires, Abruzzi Converters and Transmissions, Stinnett carburetors, Penske shocks, K&R Performance, Aeromorive Fuel Systems, and Todd's Extreme Paint.”

In his fight for the Super Comp national championship, Miller can only be passed mathematically by Brian Preszler and Luke Bogacki and Bogacki has made it known that he’s not traveling to the final two events of the season so that leaves Preszler as the lone contender. In order to pass Miller, Preszler would need to add 54 points to his current score. At this weekend’s Division 7 finale, Preszler needs to make it to the final to add to his total. At the Auto Club Finals in Pomona, Preszler is improving on a 40-point total. If he does not a improve this weekend, Preszler would need to win Pomona to pass Miller.

In Super Gas, Miller needs to win this weekend’s Division 7 event in Las Vegas in order to pass incoming leader Jeremy Mason, and that is assuming Mason does not improve his score in Pomona. Regardless of the outcome, Miller is all but guaranteed a top five finish in both classes, which is a monumental achievement in itself. 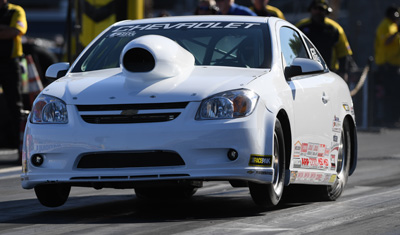 The best of the rest: A year ago, the Hancock & Lane team suffered through one of the worst seasons imaginable after they encountered a trailer fire on their way to Pomona in February that heavily damaged two of their race cars. Things went from bad to really bad after Jeff Lane put the team’s Comp Eliminator Cobalt on its roof during at the Auto Club Finals last November. Less than a year later, the car has been repaired and Jeff’s son Cody completed the comeback by winning the Las Vegas Comp title over Tony Mandella. Lane, the No. 1 qualifier, reached the final with wins against Josh Lee, Howie Stevens, and Tom Mettler. He finished the job with a (-.504) 8.136 that was enough to take out Mandella’s (-.447) 8.033. The win was the sixth of Lane’s career and his first in Comp eliminator. He’s also won three time at The Strip at Las Vegas Motor Speedway. 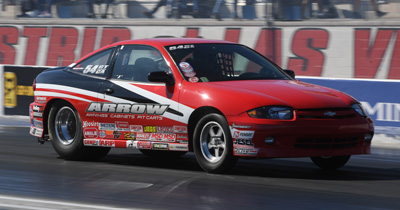 Over the last six seasons, Jason DeForrest has won the Super Stock title three times at the Dodge NHRA Nationals in Las Vegas. This time, DeForrest drove his GT/CA Cavalier to a final round win over Division 3 racer Matt Alvey in a battle where both drivers fouled at the start. Alvey left first and drew a -.006 light to DeForrest’s -.002 light. DeForrest also defeated Alvey’s brother, Mark, as well as Bob Cruzen, former word champ Ryan McClanahan and Division 1 racer Todd Hoven to reach the final round. DeForrest, who also has a win and a runner-up this season, moved into the top ten nationally following his latest victory in Las Vegas. 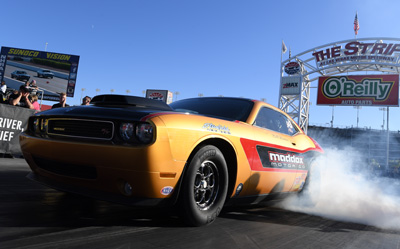 The Las Vegas Stock field featured seven former or current national champions but the victory went to first-time winner Craig Maddox, who defeated red-hot Chris Knudsen in the final round. Maddox, a two-time runner-up in Super Gas, drove his Drag Pak Challenger to the win after Knudsen fouled in the final with his four-speed Camaro. Maddox turned in his best performance in round four where he stopped a dangerous opponent in Jeff Jerome with a .010 light and a 9.456 against his 9.45 dial. Maddox also topped past Division 7 champ Leo Glasbrenner to earn a bye run into the final round. Maddox, coming off a runner-up at the Division 3 Lucas Oil Series event in St. Louis, still has a shot to earn a top ten finish while Knudsen now has two wins and two runner-up finishes in 2019. 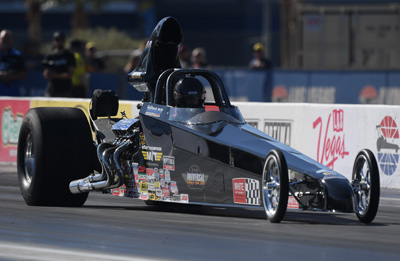 Following a win in Houston and a runner-up in Topeka, Vernon Rowland capped off one of the best seasons of his career with another Super Comp victory in Las Vegas. Rowland took on 104-time national event winner Dan Fletcher in the final round and came away with a 9.050 to 9.073 victory. Rowland, who now has three national event titles this year including his Super Gas win in Brainerd, Topped Kevin Wright with a .001 reaction time in the fourth round and then earned a bye into the final by stopping Travis Theobold in the quarterfinal round. Fletcher has now appeared in 155 national event finals since 1994 but he remains winless this season.