The Sports Report: The 2019 JEGS SPORTSnationals

At 63, Top Dragster racer Danny Nelson is enjoying one of the best seasons of his long career, and after his latest win at the JEGS SPORTSnationals he’s got a shot to win the Top Dragster national championship.
25 Sep 2019
Kevin McKenna, NHRA National Dragster Senior Editor
The Sports Report 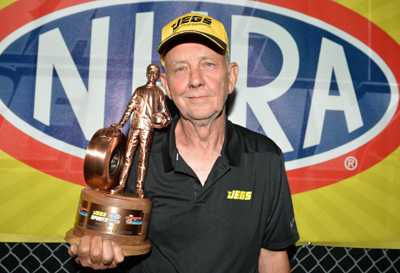 When he’s not busy racing or building race-ready dragsters in his RaceCraft Chassis shop in Batesville, Ark., Danny Nelson occasionally plays in high stakes poker tournaments so it’s safe to say he knows a thing or two about dealing with pressure situations, keeping his emotions in check, and even the art of pulling off a well-timed bluff. Those traits are likely to come in handy for Nelson following his most recent win at the JEGS SPORTSnationals in Columbus. Coming off an epic hot streak, Nelson finds himself as the points leader in Top Dragster presented by Racing RVs.com and which it is far from clinched, he has a golden opportunity to win his first national championship.

“To be honest, I thought I’d be in a position to win [a championship] before this, but when you look at it from the outside, this [Top Dragster] class looks a lot easier than it is,” said Nelson. “Today, these cars are so fast that you have to learn how to manage the power. You have to build wheel speed like a Pro Stock car. If you try to ‘dead hook’ the tire like a Super Comp car, they will shake. All of that affects your reaction time. You need to pay attention to everything including track temps. It takes a while to figure all that out. Heck, I’m still learning new things every week. As for the championship, I feel like I’m racing for it when I show up at the first race of the year. You just don’t always get a chance to stay in it this late in the season.”

Nelson’s latest hot streak began when he won the Division 3 Lucas Oil Series event in Bowling Green, Ky. He followed that with a semifinal at the Chevrolet Performance U.S. Nationals, and another win at the rain-delayed Summit Racing Equipment Nationals in Norwalk and his third win last weekend in Columbus. He went to the final of a Top Dragster race at a Midwest Pro Mod series event in St. Louis. All of Nelson’s recent success coincides with a trip to the eye doctor, where he underwent cataract surgery.

“I’m 63 years old and year I went to the eye doctor for the first time,” said Nelson. “I had surgery on my right eye just after the Indy [LODRS] race and missed the Chicago divisional. Since then, I’ve won three races in four final rounds and I went to the semi’s at Indy. Obviously, the surgery made a big difference. I didn’t’ feel like I was having a hard time seeing the Tree, but I was struggling to judge the finish line. I had one race where I gave it back by one-thousandth and another where I gave it back by five-thousandths. As soon as I had the surgery, I could notice the difference. I won some really close races in the last few weeks and I’m not sure if they would have gone my way if I didn’t get that eye fixed.”

Nelson not only built his own dragster, but he’s also built cars for a number of other Top Dragster racers, including Ross Laris and Rusty Baxter, who are both ranked in the top five. Using a Vortech centrifugal supercharger and a high gear-only transmission Nelson typically runs in the 6.10 range, which is the quickest allowable dial-in in Top Dragster and Top Sportsman. In the Columbus final, Nelson ran a 6.13 on his 6.10 dial after a nearly perfect .001 light. He held off opponent David Maggard by just six-thousandths. 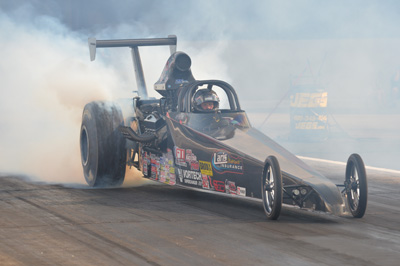 “My car makes plenty of power,” said Nelson. “I make enough power to run 5.7s at over 240 but the really important thing is that my car has been reliable. I check the valves maybe 20 times a year, but I rarely adjust them. The Vortech supercharger has been very reliable and when you look at the speeds we’re running, that’s saying something.”

While Nelson is the current points leader, he is by no means a lock to win the title. Former champ Jeff Strickland and multi-time divisional champion Mike Coughlin are both breathing down his neck and there are a handful of other drivers still mathematically in the hunt. Nelson has completed his allotment of national events and can still improve his score at two divisional races. Fortunately, the final Division 3 event at World Wide Technology Raceway in St. Louis is close to his home in Batesville, Ark. If he’s still in the running by late October, he’ll finish the year in Las Vegas at the final Division 7 event of the season.

“I think I’ve got a fairly good shot at it, but I’m probably going to have to do something at my last two races,” Nelson said. “Jeff and Mike still have a few races to claim so I’m not counting anything yet. I’m happy to finish anywhere in the top ten but if you’ve got a chance to win the whole thing you might as well go for it. We’ll go to St. Louis and see what happens and if I’m still in the running, I’ll go to Las Vegas. I’ve got a couple of customer cars out there that I can drive so it’s just a matter of booking a flight. No matter what happens, this has been good for business. I’ve already got the car I’m racing sold, and I’ve got orders for several more that are set-up just like mine is. For me, it’s just nice to know that I can still be competitive at my age. I’ve had a great year already.”

The best of the rest: Terry Smith picked up his second national event title in Comp Eliminator after beating Brian Browell in the final round. Smith, the No. 6 qualifier in his A/DA, left first and never trailed with a (-.609) 6.461 that took care of Browell’s (-.559) 7.211. Smith, who previously won the 2016 St. Louis race, and was a finalist at the 2017 JEGS SPORTSnationals race in Bowling Green, also defeated John Frech, Ed Bennett, and Greg Kamplain on his way to the final round. 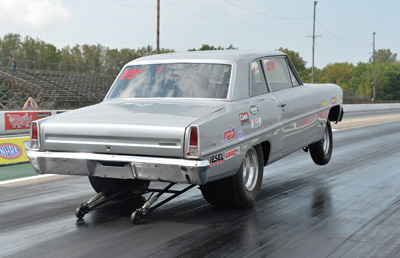 Dan Steed finally claimed his first national event title in Super Stock thanks to a solid final round performance against Matt Morris. Steed, in his SS/KA Nova, ran an 11.521 on his 11.52 dial for the win after Morris broke out by two-hundredths. Steed did not have an easy path to the final with early-round races against world champion Ricky Decker, and a tough semifinal bout with Jeff Dona, who won the Division 3 Lucas Oil Series event held in Columbus earlier this year.

After beating Bill Sempsrott in the final round of Stock, Jeff Taylor now has 47 NHRA national event wins in his career including six at National Trail Raceway. Taylor, in his COPO Camaro, grabbed a big lead at the start and coasted to the win with a 9.70 on his 9.64 dial. Taylor, who now has three wins at JEGS SPORTSnationals races, defeated Fred Thibault in the quarterfinals and Ken Witcher in the semi’s to reach his 68th career final round.

Ed Jirousek qualified No. 1 in Super Comp with an 8.903 in the first round and rode a string of consistent 8.90 runs to his first national event title. Jirousek ran 8.90 in four of six elimination rounds including the final where his 8.905 was enough to take car of Rick Pistole’s 8.897 breakout. Jirousek’s best performance came in the quarterfinals where he coupled a .001 light with an 8.904 to stop Alan O’Brien.

There was another first-time winner in Super Gas after Scott Deffenbaugh took care of former world champion Jacob Elrod in the final round. Deffenbaugh drove to a 9.911 for the win after Elrod broke out with a 9.894. Deffenbaugh also used a perfect .000 light to beat 1982 world champ Steve Eckard in the second round and posted a perfect 9.900 pass in his semifinal win against Jeremy Mason. Earlier this season, Deffenbaugh won the North Central Division Lucas Oil Series event in Norwalk. 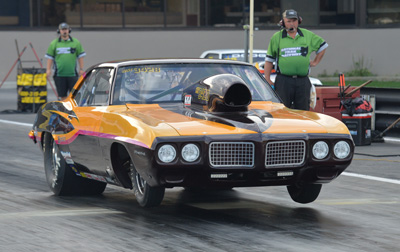 Appearing in his first national event final, Super Street winner Jim Unum didn’t let the opportunity go to waste. Unum locked up his first victory with an almost unbeatable performance that included a .005 light and a 10.906. Runner-up Gary Horstmann, a past winner of the JEGS SPORTSnationals, suffered a breakout with a 10.894. Unum opened eliminations with a 10.901 run and also turned in time slips of 10.908 and 10.901 in his quarterfinal and semifinal wins against Jeff McMillen and Rob Foss, respectively.

Scott Wasko is a perfect two-for-two after driving to the win in Top Sportsman presented by Racing RVs.com. Wasko won the Division 3 Lucas Oil Series event earlier this year and has now earned his first national event title by beating championship contender Sandy Wilkins in the final round. Wasko left first with a solid .010 light and held on for the title with a 6.631 on his 6.60 dial. Wilkins ran a 6.668 on his 6.66 dial but trailed by .004-second at the finish line. Wasko technically did not qualify for the 32-car field but got in as an alternate and went the distance with a string of 6.6-second runs.

A pair of Division 4 racers met to decide the title in Sportsman Motorcycle where Michael Nash emerged as the champion over Dave Gautreaux. Nash rode to an 8.077 on his 8.03 prediction for the victory while Gautreaux was nine-hundredths off his dial-in. Nash was also the top qualifier in the class thanks to his .024 reaction time.