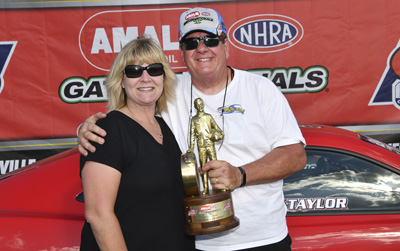 Jeff Taylor was still a teenager when he drove Jimmy Morton’s Camaro convertible to his first national event title at the 1981 Cajun Nationals. Later, that year, he was crowned a national champion alongside his older brother, Charlie, who earned the Super Stock title.  At the time, Taylor had little chance of knowing that 37 years later, he’d still be going strong with 45 wins and four national championships to his credit.

Taylor’s latest victory came in Gainesville after he drove past fellow veteran Kenny Miele in the Stock final. Taylor was good when he needed to be and admittedly lucky on a couple of other occasions. He gave up a hundredth of a second to Miele on the starting line, but finished the job with a 9.816 on his 9.80 dial after Miele missed his prediction by six-hundredths. It was Taylor’s first national event win since the end of the 2014 season when he claimed the Super Stock title at in Pomona.

“It’s been a long dry spell, so it was nice to win again,” said Taylor. “I hardly ever get race the same car twice and I don’t race as often as I used to, so you learn to appreciate these [wins] a little more. This year, my son, Chad, agreed to stay home and run the family [engine-building] business while I’m gone racing and I’ll stay home when he’s racing. That has helped a lot. Now, we can both concentrate on what we need to do.”

“This is a really good car,” said Taylor. “You can’t beat the new technology in these cars. When we got the car from Victor it didn’t have an engine, transmission, or rear-end. We sent it to B&B Race Cars and they re-did the roll cage to make it more comfortable for me. It’s been a great car since day one. Compared to the old
’69 Camaro, it’s like night and day.” 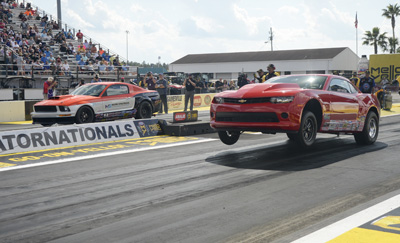 With 45 wins in the bank, Taylor admits that the thought of 50 wins has crossed his mind a time or two. Should he get there, he’d be just the 18th driver in NHRA history to achieve the milestone and the fourth sportsman racer, joining Dan Fletcher, David Rampy, and Peter Biondo.

“It would be nice to get to 50; hopefully I get there eventually,” said Taylor. “Every year I keep saying it’s going to be my last year but I keep coming back. I guess as long as my health is good and I’m having fun, I can keep going. I do still enjoy it. I wasn’t perfect this weekend but the car was so good. I was just in the right place at the right time.

“I don’t know if I’d ever chase another championship, but I plan to run about eight national events this year. My customers come first, and then if there is time for racing I take the car out. Fortunately, business has been good. I do have to thank my wife, Patty, and my son, Chad, for their help. Also, Jeff Strickland, Victor Cagnazzi, Willie Evans, Roger Allen from Chevrolet, JEGS, Mickey Thompson, and Sunoco. They made this possible.”

The best of the rest: A year ago, Frank Aragona Jr. bought what is arguably the best Comp car in the country when he purchased the E/DA that Doug Doll Jr. drove to the 2016 national championship. Aragona won a lot of races last year, but ultimately finished second to David Rampy in the points battle. Now, Aragona is determined to pursue another title after claiming his tenth national event win and second in Gainesville. Paired with Greg Kamplain’s B/Econo Dragster in the final, Aragona won with a (-.538) 7.332 to Kamplain’s (-.501) 6.829. Aragona entered the final down .12-second in index while Kamplain had .13-second in CIC penalties.

The father-son duo of Bill and Drew Skillman advanced to the semifinals of Super Stock but Bill dropped a close battle against Pat Clifford and Drew fouled by three-thousandths against Kevin Rimer. In a battle of first-time finalists, Riner came out on top when he drove his SS/JA Camaro to a slowing 11.014 on his 10.87 dial after Clifford ran into a problem and ran six-tenths off his dial. Earlier in eliminations, Riner defeated Irvin Johns, Richard Kay, and Ed Longhany.

Super Comp produced another first-time winner after Greg Slack stopped chassis builder Ray Miller Jr. in the final round. Slack’s driving was solid throughout eliminations but his best performance came in the quarterfinal round where he stopped two-time national champ Sherman Adcock Jr. Both drivers were nearly perfect off the starting line and Slack won with an 8.926 after Adcock broke out by three-hundredths. In the final, Slack banked nine-thousandths at the start and won by a narrow 8.911 to 8.910 count. 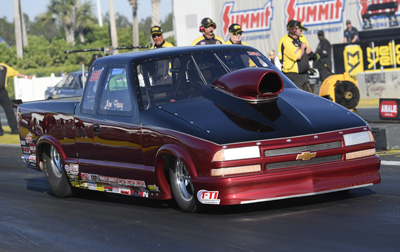 For the third time in the last seven years, Jim Perry earned a Wally at the Amalie Motor Oil Gatornationals. The 2009 Super Comp national champion claimed his fifth national event title by driving his S-10 truck to a 9.912 to 9.933 win over Michell Furr’s Corvette roadster in the final. Perry’s path to the final includes wins over some of the toughest racers in the Southeast division including Chuck Trotter, Chuck Westcott, and Ray Miller III.

The final round of Top Sportsman presented by Racing RVs was anticlimactic after Lester Johnson broke in his five-second ’55 Chevy. Johnson’s misfortune allowed for Ronnie Proctor to claim his first national event win in the class. Proctor, in his Ford-powered ’09 Mustang, had been a runner-up on four occasions but scored his first national event title after wins against Scott Lyons, Donny “Hollywood” Urban, Derick Brown, and Jeff Pittman.

The Top Dragster presented by Racing RVs.com class also featured a single in the final round after Steve Cohen, the 1987 Super Comp national champion, reportedly broke a transmission. Cohen staged but did not leave the starting line allowing Alan Kenny to claim his eighth national event title, and first in Top Dragster. Kenny’s other wins came in Super Comp and Super Gas and he also spent time in the Pro Comp class more than 30 years ago. Kenny reached the final after a tough battle against former national champ Jeff Strickland in the third round. After a pair of nearly-perfect reaction times, Kenny took the stripe by .002-second at over 210-mph.