The Sports Report: A winning strategy 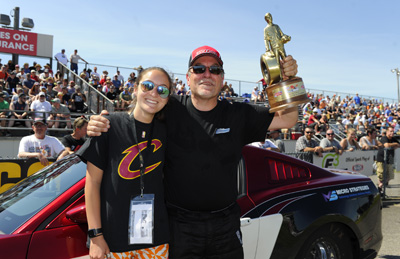 As the founder and CEO of Micro Strategies, New Jersey-based businessman Anthony Bongiovanni has made a nice living out of identifying and solving complex problems. A decade ago, Bongiovanni decided to go drag racing and applied some of the same principals that made him successful in business into his team, which features a fleet of Ford Cobra Jet Mustangs. He experienced success, but it didn’t come nearly as quickly as he would have liked. Although competitive, Bongiovanni’s biggest goal; an NHRA national event victory, proved elusive until he defeated veteran Tom Boucher in the Super Stock final at last weekend’s NHRA New England Nationals. In fact, he hoisted three Wally trophies, with the other two coming from wins during Stock and Super Stock Class eliminations.

“What a relief; this has been a long time coming,” said Bongiovanni. “I was beginning to wonder if I was ever going to be able to close the deal and win one of these things.”

Appearing in his first national event final, Bongiovanni gave up a slight advantage against Boucher, the 1992 U.S. Nationals champ. At the finish line, Bongiovanni rallied to win with an 8.461 on his 8.45 dial. He crossed the stripe just two-thousandths of a second ahead of Boucher’s GT/GA Firebird.

“I could tell I was going to catch Tom before the stripe,” Bongiovanni noted. “I pedaled him once as I got on his bumper, and just barely got there ahead of him. It took a second for the win light to come on, and when it did the feeling was surreal. I couldn’t believe I won the race. There was no better feeling in the world at that moment. I was absolutely thrilled to have my daughter, Michelle, there. Michelle and I haven’t been out racing much this year and we spent the whole weekend together. The only thing that would have made it better is if Bev, and my other daughter, Genna, were there to help me celebrate.”

The win was good medicine for Bongiovanni who admittedly has not had a great 2018 season. In March, he suffered a set-back when he hit the guardwall with his Factory Showdown car a week before the season-opening Amalie Motor Oil Gatornationals. Mechanical issues have also hampered the team at times this season. 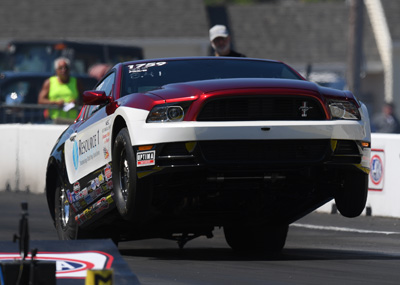 “Admittedly, I was struggling before Epping,” said Bongiovanni. “The cars weren’t where we wanted them to be. We worked hard after [the Division 1 Lucas Oil Series event at] Lebanon Valley, and we felt good going into this weekend, but then it rained, and we only got one [qualifying] run. Michelle’s car didn’t run as anticipated, but my Super Stocker ran well.”

Bongiovanni’s involvement in drag racing began with his daughters Genna and Michelle, racing in the Jr. Drag Racing League. He quickly added Cobra Jet Mustangs for NHRA Stock and Super Stock competiton. His Micro Strategies team now includes seven Cobras. His drivers, including Ken Miele, Ray Scardelli, and Evan Smith, have won multiple events in NMRA and NMCA, but his goal has always been an NHRA national event title.

“It was a great day and a lot of fun,” Bongiovanni said. “The Cobra Jet made it easy, I had no concerns. Nick Casertano builds a great car; it’s won Best Engineered and now it’s an NHRA national winner. That was the best race car I’ve ever had on race day.

“For me, this sport is about spending time with my family and friends” Bongiovanni said. “We’ve shared it all and grown from Jr. Dragsters, up to Stock and Super Stock. It was so cool to win because we do it as a family. I was so proud, and they were over the top. This sport is so challenging and humbling. You can be competitive with yourself and against the competition. At times it’s tough, but a win like this gives you the enthusiasm to work harder.”

The best of the rest: As the fiancé of reigning Pro Stock world champ Bo Butner, Randi Lyn Shipp is able to race at almost all of the 24 NHRA Mello Yello series events and she’s usually able to win her fair share. In Epping, Shipp made it to the final round for the seventh time in her career and picked up her third Wally after defeating Howie Smith. Shipp, in her familiar white C/SA ’67 Firebird, won the final with a 10.548 on her 10.53 dial while Smith, in his M/SA Malibu, missed his 11.88 prediction with an 11.938. Shipp won her first national event title in Phoenix in 2011 and also banked wins in 2013, 2015-16.

Mike Robilotto won back-to-back Bristol titles in Super Comp in 2008-09 but it took him the better part of a decade to win again on the national event stage. Robilotto, the father of former Indy champ, Heather Fetch, broke his drought with a holeshot win over Timmy Markoglu in the final round. Robilotto, who defeated Jack Sepanek in the semifinals, ran an 8.935 in the final round to stop Markoglu’s quicker 8.902. Robilotto made a nearly-perfect run of his own a few rounds earlier with an 8.906 that was enough to cover Stephen Logan’s 8.931. 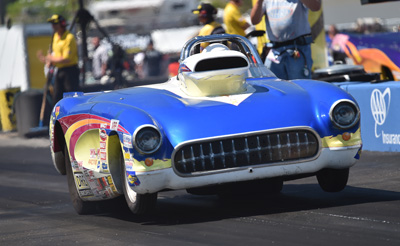 At age 77, Ken Bowers officially became NHRA’s oldest national event winner when he stopped Justin Lopes in the Super Gas final. Bowers, of Islip, N.Y. drove his ’57 Corvette roadster to a great run that included a .007 light and a 9.919 to turn on the win light against Lopes, who trailed with a 9.943. Bowers, who had a tough path to the final with wins against Peter Luciano, Mike Sawyer, and Rick Price, joins a list of drivers that have won in their 70s including Mike Saye, Chuck Gallagher, and Marlin Snyder.

Super Street also featured a first-time winner in Peter Maduri, who flirted with perfection in the final round with a .013 light and a 10.907 behind the wheel of his Chevy S-10 truck. Maduri defeated former Epping winner Brian Sawyer in the final after Sawyer broke out with a 10.881. Maduri topped former Division 1 champ Shawn Fricke in the quarterfinals to earn a bye into the final while Sawyer defeated Robert Lattner and Cory Prindall in the late rounds. 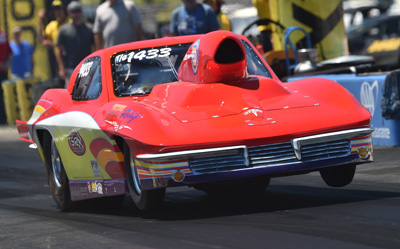 As usual, the Top Spotsman presented by Racing RVs.com class provided some of the biggest thrills, and best side-by-side racing of the weekend. After five tough rounds, Dave Testa of Seakonk, Mass., emerged as the champion. Testa drove his ’63 Corvette past the similar entry of Brian Conrey in the final. Testa left first and never looked back with a 7.221 on his 7.21 dial for the win. In the semifinals, Testa stopped Daniel Christopher, who normally races his ’93 Mustang in X-275 events but installed big rear tires in order to compete in the Epping Top Sportsman field.

Debby DiGenova successfully defended her 2017 title in the Top Dragster presented by Racing RVs.com class when she beat Rebecca Miller in an all-female final round. After nearly identical reaction times, DiGenova nailed her dial with a 6.082 on a 6.08 while Miller was also on the money with a 6.844 on her 6.84 prediction. At the stripe, DiGenova was ahead by seven-thousandths of a second. In the semifinal round DiGenova was nearly perfect with a .006 light and a 6.803 on her 6.80 dial that was too much for opponent Albert Stafferi to overcome.