The Sports Report: Winning is contagious 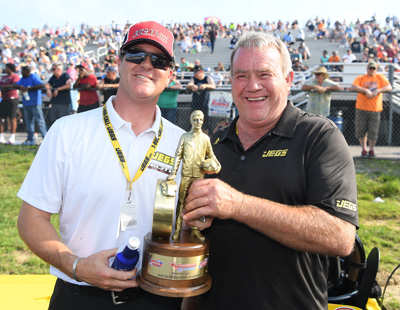 Reigning Mello Yello world champ Bo Butner isn’t the only NHRA pro that maintains close ties to his sportsman racing roots. Five-time Pro Stock champ Jeg Coughlin Jr. also has an impressive sportsman racing resumé that includes the 1992 Super Gas national championship and national event wins in seven different eliminators. Coughlin often races two cars at national events and is a member of the prestigious double-up club thanks to his Stock and Super Comp wins at the 2015 JEGS Northern SPORTSnationals in Columbus. Two weeks ago at the JEGS Route 66 NHRA Nationals in Chicago, Coughlin scored his first Pro Stock win since the 2014 Englishtown race when he defeated Greg Anderson in the final. Coughlin’s hot hand continued in Richmond when he drove his dragster to the Super Comp title.

“It feels great to get a huge win last week in Pro Stock and come back this weekend and win Super Comp,” Coughlin said. “It feels equally as good, without question. The Sportsman racers are a tough as any racers in the country and I take great, great pride in being able to race alongside them. The car has been running well all weekend. Quite honestly, we struggled with it a little bit in Chicago, probably testing some things we shouldn't have, but it ran extremely well this weekend.” 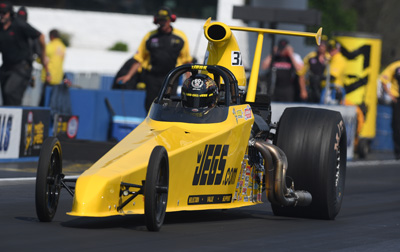 Coughlin suffered a quarterfinal loss in his JEGS.com/Elite Pro Stock car in Richmond, but quickly changed gears, jumping in the dragster and nailing a .011 light to stop Dave Long in the semifinal round. In the fifth and final round, Coughlin earned national event win No. 78 and his third in Super Comp, after Rich Dorr fouled. Coughlin survive several other tough battles on his way to the final including a close round-two race against Chase Fahnestock. Both drivers were almost perfect off the starting line and Coughlin prevailed with an 8.922 after Fahnestock broke out by a thousandth of a second. Coughlin also put together a tidy package with a .012 light and an 8.903 in his quarterfinal win against Kent Hanley.

“I love racing in Pro Stock but I also love sportsman racing,” said Coughlin. “No matter how long I race in Pro Stock, I always plan to have a sportsman car. What a day; thanks to all of our folks back at JEGS that support us day in and day out, and to the team here at the race track, Randy [Bishop] and Justin [Beaver]. The fans here came out in grand style this weekend at Virginia Motorsports Park. We love them.”

The best of the rest: Seven years after scoring his first national event win in Charlotte, Joe Tysinger scored again after driving his GT/NA Firebird to a final round win over Joe Lisa. Leading up to the final round, Tysinger drove what could easily be described as the race of his life at least on the starting line where he won the first four rounds with no reaction times slower than a .013. Tysinger downed Byron Worner with a .022-second package and returned a round later to defeat Worner’s twin brother, Bryan, with an even more competitive .013-second package. Tysinger’s crowning achievement came in the semifinals when he cut a perfect .000 light and used a 10.627 on his 10.60 dial against three-time national event finalist Sterling Simmons. 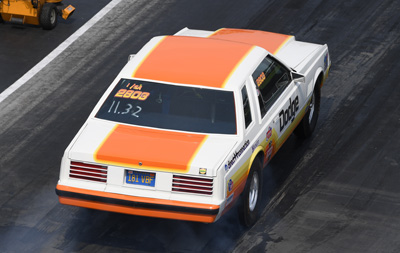 Nearly 20 years ago, Randy Parker claimed his first national event title when he won the Stock title in Bristol. Parker coasted to a win in Richmond after opponent Eugene Monahan broke in the final round. Parker, in his unique I/SA ’80 Dodge Mirada made his way to the final after wins over James Perrone, Daniel Lynch, Adam Keir, and Jeannie Linke. Parker’s semifinal race against Linke was a heads-up, no breakout I/SA battle and he powered to the win, 11.35 to 11.44.

The Super Gas final featured Canadian Charlie Kenopic and perennial top ten finisher Mike Sawyer and predictably, it was a side-by-side race that was decided by less than a hundredth of a second at the finish line. Kenopic, the winner of the 2013 Reading event, left first, .004 to .012, and turned on the win light by the same margin after both drivers ran matching 9.893-second elapsed times. Kenopic had a tough road to the final including wins against Jason Kenny, Greg Slack, former national champs Iggie Boicesco and Dan Northrop. Against Boicesco, Kenopic was sharp on both ends of the track with a .010 light and a 9.909. Kenopic’s win over Northrop was also classic with a four-thousandths margin of victory.