TUNE TO FS1 AT 9 A.M. EASTERN FOR QUALIFYING HIGHLIGHTS FROM HOUSTON FOLLOWED BY FINAL ELIMINATIONS AT 2 P.M. or watch live on NHRA.tv

The Sports Report: What's the point?

For NHRA’s Lucas Oil Series sportsman drivers, this is crunch time. There are just four races left in the 2018 season including a pair of divisional events in Nobile, Okla., and Las Vegas and the two Mello Yello series national events in Las Vegas and Pomona. That means that time is limited for any driver hoping to make a run at a national championship. While Sean Bellemeur has already clinched the Top Alcohol Funny Car crown, the rest of the titles are up for grabs and in some cases, there are many contenders for the top spot. Here is a breakdown of the championship battles in each class. 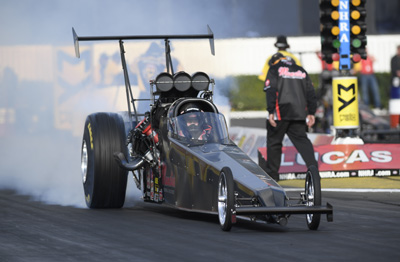 Top Alcohol Dragster: Joey Severance is in a position to win a fourth-straight Top Alcohol Dragster title but he’s got work to do before he can celebrate. Severance currently trails leader Shawn Cowie by ten points in the standings and both drivers have races left to claim. Cowie can better his score at both of the remaining national events and he’s bettering a quarterfinal and a semifinal finish.

Severance appears to be a slightly better spot since he can also improve his total at both national events and is improving on a round one loss and a quarterfinal. Severance can also score points at the final regional event in Las Vegas but nothing less than a victory will help him. 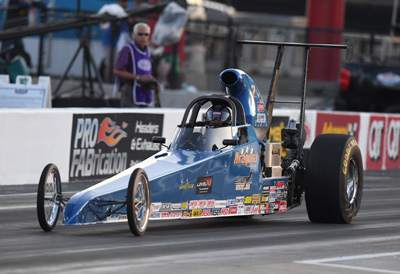 Comp Eliminator: At this point, Frank Aragona Jr., Clint Neff, David Rampy, or Craig Bourgeois will be the 2018 NHRA Comp champ. Aragona, the 2007 champ, is the leader in the clubhouse with 613 points and he cannot score anymore points. He’s not entered for the final two national events, so it seems likely that he’ll sit back and await his fate.

Neff is perhaps in the best spot to catch him, not just because he’s in second place, but he also has two races left to claim, on national event and one divisional event. Neff is improving on a pair of 53-point semifinal finishes. Should he reach the final in either event, he’ll pass Aragona for the lead. Should he win either race, he’ll lock out Rampy and Bourgeois and be the champion. With three shots to pick up 19-points, Neff would appear to be in the driver’s seat.

Rampy and Bourgeois, both former champs, can each claim one final divisional event of the season, (either Las Vegas or the rescheduled Division 4 event in Nobile, Oka.). Bourgeois must win his final race in order to have a chance while Rampy can pass Aragona with either a win or a runner-up finish. 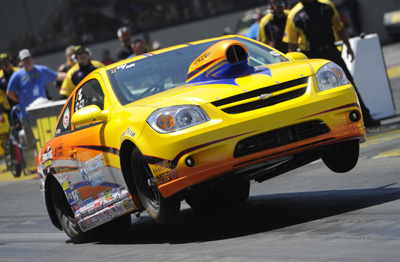 Super Stock: The battle for the Super Stock title is wide open with seven drivers still in contention including reigning champ Justin Lamb, who is the current leader. Lamb, seeking the unprecedented feat of winning four championships in two years, has 594 points and can improve at the final divisional event which happens to be in his backyard in Las Vegas. Should Lamb reach the final round of that event, he can freeze out the rest of the field that includes Brad Zaskowski, Chris Chaney, Brandon Bakies, Anthony Bertozzi, Tyler Bohannon, and Jimmy Hidalgo Jr.

Of the drivers pursuing Lamb, Zaskowski would seem to have the best chance to catch him, currently at 580-points, Zaskowski can claim one more divisional event and he needs only to win two rounds to add to his total. With a victory, Zaskowski can push his points total to 645. Since he’s not entered in the Las Vegas event, it seems likely that Michigan-based Zaskowski will go to Nobile for his final event.

Bohannon is also in an interesting spot following his clutch win at the Division 3 finale last weekend in St. Louis, Bohannon has 557-points but he can claim points at both of the remaining national events. A win at either would bring his total to 613, meaning that Lamb would have to improve to stay in contention.

Chaney can get to 616 points with a national event win while Bertozzi and Bakies can improve to 625 and 624 respectively with a divisional event victory. 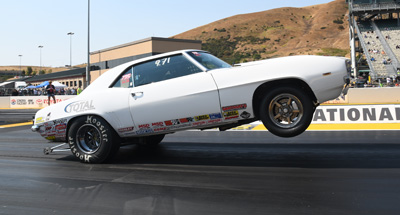 Stock: Lamb is also able to defend his 2017 title in Stock although he has work to do to make that happen. Currently trailing leader Brian McClanahan by just one point, Lamb has one divisional event left to claim and he needs to reach the semifinals to better his score, assuming a field of 65 or more cars, which is highly likely. Should Lamb win the final divisional event, he can post a score of 721 points.

McClanahan is in a prime position to improve his tally with two national event and one divisional event left to claim. On the national event side, he can add to his total by reaching round four in either Las Vegas or Pomona. He can also improve on the divisional side with a semifinal or better finish.

Jeff Taylor is in the running for a fifth national championship, but the path is narrow since he’d have to win his final divisional event. Should Taylor, win he’ll crest the 700-point plateau, which may or may not be enough to win the title depending on whether McClanahan or Lamb improve. No Sportsman driver has scored 700-points and not win a championship but it’s entirely possible that could happen here.

After a season that already includes three wins, Thomas Fletcher is in fourth place in Super Stock with 579 points and he’s still mathematically alive. Fletcher can claim points at both national events and a final divisional event but to be able to chase down the leaders, he’d likely have to appear in at least two final rounds. If Fletcher were to run the table at both Las Vegas races, he could boost his score to 709 points. 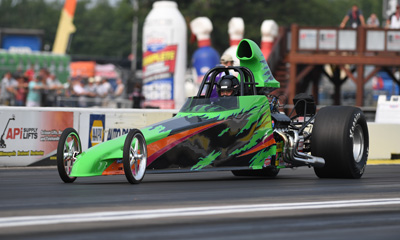 Super Comp: Following last weekend’s divisional action there is a new leader in Super Comp and it’s Division 5 racer Don Nichols who crested the 600-point mark. Nichols is in an enviable position because he’s got two national events and a divisional event left to claim and he’s bettering early-round losses in both.

There are more than a dozen drivers pursuing Nichols and several of them have multiple races left to claim which means this could easily be a title that isn’t decided until the late rounds in Pomona. Some of the contenders include Austin Williams, Steve Williams Robert Naber, Ray Miller Jr., and his son, Ray III. Koy and Steve Collier are also both in the mix.

Two drivers of particular interest are Division 1 racers Tom Stalba and Kyle Bigley. Stalba, a six-time division 1 champ is currently ranked No. 24 while Bigley is No. 28 however, but drivers have multiple events left to claim. Stalba has attended just two national events while Bigley has been to just one so their full score from any event will count. 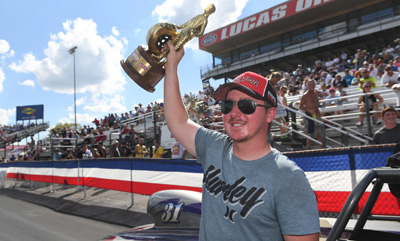 Super Gas: Division 3 racer Devin Isenhower has set the bar in Super Gas with 622 points and he’s out of races, so he’ll be watching to see if anyone can catch him. There are at least a half-dozen drivers still in the running, including Aaron Kinard -- he's currently 52-points behind Isenhower but can claim points at one national and one divisional event. Kinard is bettering a round one finish in national event competition and a round four finish on the divisional level.

Michael Miller, Casey Plaizier, Travis Salter, Jim Capp, Joey Shipp, and Carl Watts are all mathematically in the running but in the case of Capp, Shipp, and Watts, a shot at the title would likely involve nothing less than three final round finishes over the last three weeks of the season. Plaizer has two national events left and must reach the final in both to have a shot while Miller has three races in which to make up a 54-point deficit. Miller needs to reach the final at a national event to better his score but he could tie Isenhower with a divisional win, assuming a field of 128 or fewer cars. 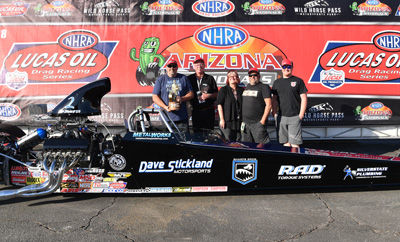 Top Dragster presented by Racing RVs.com: Either Paul Nero or Mark Jones will be crowned the champion in the Top Dragster class and since that class isn’t contested at either of the final two national events, the battle will be decided at one of the two remaining Lucas Oil Series divisional events. Nero is done claiming points and sits at 608 points, and Jones is 63-points back with one race left. That puts Jones in an interesting quandary. He’s based in Louisiana, so it would make sense for him to go to Nobile, but that event features a 32-car field while the Las Vegas race offers a 64-car field. As such, there are 105 points available for a win in Las Vegas and just 95 for a win in Nobile. The short version is that Jones needs to win the Las Vegas race in order to win the title by just one point over Nero. 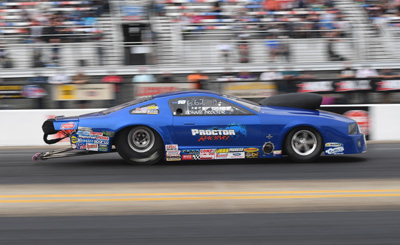 Top Sportsman presented by Racing RVs.com: The final three drivers in the battle for the Top Sportsman title are Ronnie Proctor, J.R. Lobner, and Doug Crumlich. Proctor is the leader at 589 points while Lober is 14-points back ad Crumlich is also close, just 19-points out of the lead. All three drivers have a divisional event left to claim and Proctor is bettering a 52-point score while Lobner is replacing a 40, and Crumlich a 51. If Proctor is not able to improve his score, Lobner would  have to reach the quarterfinals to pass him while Crumlich would need a semifinal or better finish to have a shot at the title.