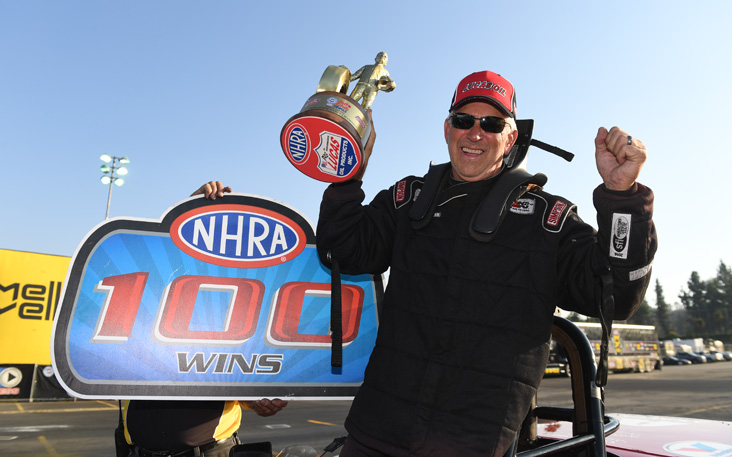 For all the drama and excitement generated during the season-ending Auto Club NHRA Finals in Pomona there was one achievement that stands out above the rest because there is a good chance that it may not be duplicated for quite some time. Comp veteran David Rampy scored his long-awaited 100th NHRA victory, joining John Force, Frank Manzo, and Dan Fletcher in perhaps the most exclusive club in the sport.

Greg Anderson currently has 91 wins in Pro Stock while Tony Schumacher has 84 Top Fuel victories and Jeg Coughlin Jr. has a combined 80 wins across seven categories and it makes one realize that it might be a while before anyone else cracks the century mark.

Rampy won his first title in 1983 when he drove his late father-in-law Sonny Ray’s car to the Super Stock title at the Cajun Nationals in Baton Rouge. He didn’t win again for six years until he started running in Comp Eliminator. Rampy has since become the sport’s most successful Comp driver by a wide margin with 81 of his 100 wins coming in the performance-based eliminator. He also has victories in Super Stock, Stock, Super Comp, and Super Gas.

“You know when you start out, and you win that first race you never dream you’d have the opportunity to win 100,” said the ever-humble Rampy. “But you know we’ve been very blessed. You know, I’m a Christian, and the Lord has blessed me beyond measure. I'm not only blessed just in the racing but the people he’s put me with. It’s all about the people, what they’ve done, you know. Ray Skillman, Harold Stout, Allan and Todd Patterson, the companies; Hoosier and just K&N, just so many companies.” 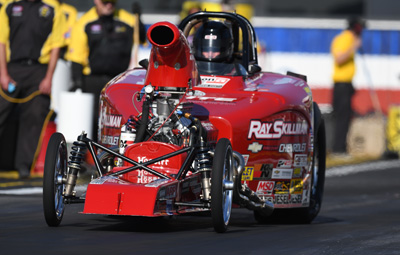 Rampy, who has shared the spotlight for nearly all of his wins with his longtime crew chief, Barry Davis, entered the 2018 season sitting on 96 wins and hit his stride at mid-season with wins in Norwalk, Indy, and St. Louis, all of them behind the wheel of his Ray Skillman-backed A/EA ’32 Bantam roadster in Comp. He appeared to have the upper hand on his 100th win when he reached the final round in both Super Stock and Comp at the AAA Texas NHRA Fallnationals in Dallas. Rampy lost both final rounds within minutes of each other and also came up empty at the next two stops in Charlotte and Las Vegas. Faced with the very real possibility of having the chase to 100 drag out into the 2019 season, Rampy responded with a strong performance in Pomona. After losing in round two behind the wheel of his Super Stock Camaro, Rampy focused his efforts on Comp, his bread-and-butter class for more than a decade. Although he took a nine-hundredths CIC penalty in his round two win against Josh Lee, Rampy was able to hold on for the win. His 100th victory became official when opponent Doug Lambeck fouled in the final round.

In addition to his 100 national event wins, Rampy has 60 runner-up finishes to his credit and has been a national champion on five occasions, which more than validates his status as a first-ballot Hall of Famer. Even at age 63, Rampy appears to have lost very little, if anything in terms of competitive desire. It’s not likely that anyone will ever be able to match or overtake all-time NHRA win leader John Force, who is currently sitting on 149 wins, it does appear likely that Rampy will add to his total.

“I don’t know. I just don’t know,” said Rampy, when asked about his future. “We’re going to go home. It depends on my sponsors and everything. Just see what happens. I’m not really ready to quit; I don’t think. But you know, we’ll just wait and see what happens. It’s a long winter. We’ll just enjoy it and keep everybody guessing. It keeps me guessing.”

The best of the rest: In Stock Eliminator, Steve Wann’s A/SA ’63 Sport Fury is a beast and a threat to win just about any heads-up battle. In Pomona, Wann proved that is’ also an effective Super Stock car when he drove to his sixth-career national event title. Wann nearly triggered an automatic horsepower adjustment following her performance two weeks ago in Las Vegas, which necessitated his moves to Super Stock in Pomona. Racing in a stacked field that included eight former or current world champions, Wann took out his share of tough customers including Jimmy DeFrank and veteran Len Schnieder. Paired with Gary Emmons in the final, Wann saved his best for last with a .002 light and a 9.78 on his 9.77 dial for the win. 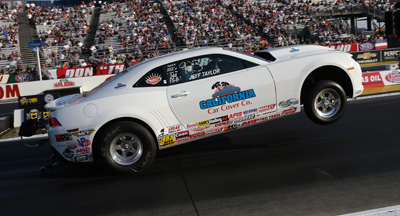 Jeff Taylor missed out on a chance to win the national championship in Stock, but he ended his season on a high note when he drove the DeFrank famiy’s new Camaro to a final round victory over Ryan Mangus, who fouled by three-thousandths. Taylor, who now has 46 national event wins to his credit, managed to overcome a nearly-perfect .001 light by Mike Cotten in the second round, and also scored wins against Tony Mandella and Jon Irving. Taylor finished the season with three wins and two runner-up finishes including the NHRA Toyota Nationals in Las Vegas two weeks before Pomona. 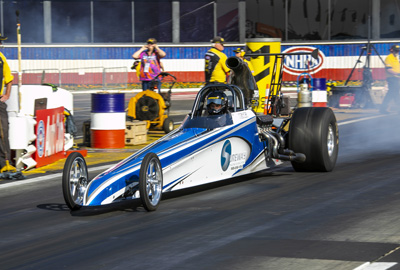 The Super Comp class featured not only a first-time winner in Chad Webber, but also a thrilling end to the championship points battle between eventual champ Steve Williams and challenger Mark Grame. Williams took over the lead after his runner-up finish a week earlier in Las Vegas. Coming into Pomona, Grame was the only driver with the ability to catch him and he had to reach the final round. Grame managed to reach the fifth round and with a bye run looming in the semi’s, he had to get past opponent Tony Helms to win the title, but Helms prevailed thanks to a nearly unbeatable .006 light and an 8.918, making Williams the champion. Helms missed the Tree in the final and the win went to Webber, 8.91 to 8.94. A round earlier, Webber used a perfect 8.900 run to take out Steve Collier.

Roger Kato made it to his first national event final in Super Gas in 1985 and his second in 2010 and at the end of the 2018 season, he finally got to celebrate his first victory following a final round win over former Pomona champ Greg Ventura, who fouled by .003-second. Kato was the top qualifier in the Super Gas class with a 9.901 in the opening round and later in eliminations, he nailed the index perfectly with a 9.900 pass to defeat Marco Perivolaris. Ventura got to the final round following a semifinal win against Matt Blodgett, who entered the event on a hot streak after winning the NHRA Toyota Nationals in Las Vegas two weeks earlier.