The Sports Report: Pressure. What pressure?

In the midst of a heated battle for what could be his second Lucas Oil Series Super Stock national championship Anthony Bertozzi picked up career win No. 20 in Reading.
19 Sep 2018
Kevin McKenna, NHRA National Dragster Senior Editor
The Sports Report 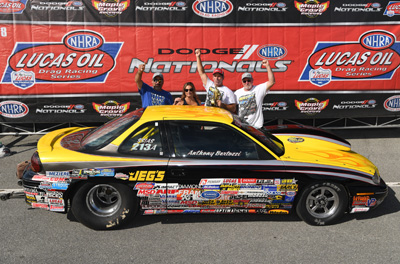 It remains to be seen whether Anthony Bertozzi can hang on to win the NHRA Super Stock national championship but even if his bid for a second title falls short, he’s going to remember the 2018 season as one of his best. Bertozzi defeated Epping champ Anthony Bongiovanni in the final round of the Dodge NHRA Nationals to pick up his second national event and fourth overall win of the season.

Well known for his all-or-nothing approach, Bertozzi cut a nearly-perfect .002 light in the final and won with a 9.06 on his 9.04 dial. Bongiovanni broke out with an 8.91 on his 8.93 prediction. Afterward, Bertozzi couldn’t help but acknowledge the stiff competition that exists in Super Stock, particularly in the Northeast Division.

“I think Division 1 has the toughest racers in the country,” said Bertozzi. “There are a lot of great racers here. This race started with 65 cars and with the storm [possibly] coming here, it dropped to about 40 during the week but it seems like everyone who stayed was tough. I think any one of them could have won this race.

“Winning never gets old,” Bertozzi said. “Sometimes, you want to head for the beach and relax when you get beat down but winning is always great. I had my buddies, Peter [Biondo] and Kyle [Seipel] here on Saturday to help me with some numbers. Then [on Sunday] they were on the road and they were dialing me from long distance. That was a big help.” 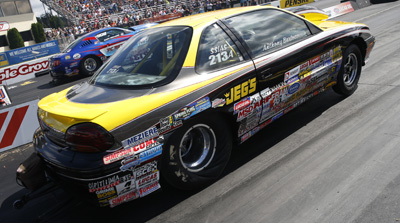 Bertozzi caught a bit of a break in round one after Duane Eiskant fouled but after that, he was rock solid in his wins against Michael Iacono, Gary Richard, Joe Lisa, and Brittany Boltz. Bertozzi owns a fleet of race cars, but he’s quick to point out that his bright yellow Grand Am Super Stock entry is easily his favorite, and easily his most successful.

“I bought this car in 2001 from a racer named Jeg Coughlin, you all might know a little about him,” said Bertozzi. “This was Jeg’s personal car. Since I’ve gotten it, I’ve won a lot of races and the championship in 2001, and I wouldn’t sell it for anything. I love this car.”

There isn’t really a downside to Bertozzi’s latest victory although it’s worth noting that he did not earn any championship points because he’s already competed in six national events, the maximum allowable. As a result, Bertozzi remains second in the national standings behind defending champ Justin Lamb. Bertozzi is 14-points back and both he and Lamb can earn points at two more Lucas Oil Series divisional events. Those who know Bertozzi know that for all his success on the track, he’s got a calm demeanor that makes him virtually immune to pressure.

“I don’t spend a lot of time counting points,” said Bertozzi. “They only matter at the end of the year. Justin is about as tough as they come; he didn’t win two championships last year by accident. He’s going to be tough and I’m sure there are a bunch of other guys who could also win the whole thing.  We’ll just go run a couple more races to finish the season and then see where we’re at when it’s all over.” 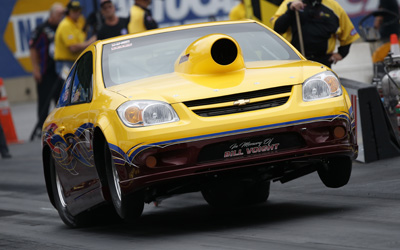 The best of the rest: Tom Martino hasn’t raced since his Comp Eliminator win at the 2017 Reading event, but he showed no signs of rust when he drove Ken Voight’s H/A Cobalt to a second-straight victory. Martino, who builds engines for Voight and a number of other Comp racers, was the low qualifier in the 15-car field and got a bye run in the opening round. The five-time Pro Stock national event winner also topped Al Ackerman and Joe Carnasciale to move to the final. In the process, Martino lost .13-hundredths in CIC penalties while final round opponent Jay Schoenberger was down .14-hundredths in his I/A ’96 Cutlass. The index became irrelevant when Martino cut a competitive .030 light while Schoenberger encountered a problem and missed the tree by more than two-tenths.

Shane Oakes battled hard to win his first national event in Stock including a final round win over Anthony Fetch, one of the most successful sportsman racers in the Northeast Division. If he was nervous in his first national event final, it didn’t show as Oakes, in his G/SA Camaro, turned in a strong performance with a .017 light and an 11.144 on his 11.14 dial. Fetch left alongside Oakes with a .018 light but fell off the pace with a 10.072 on his 10.02 dial. 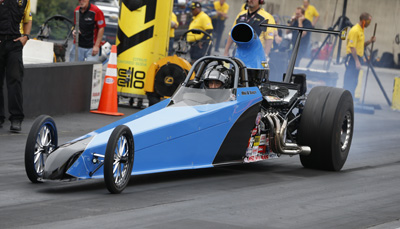 Mike Robilotto’s 2018 season was already a success thanks to a Super Comp win in Epping, but he has now bagged titles as two of the Northeast Division’s three national events thanks to a final round win over Chris Garrettson in Reading. Ribolotto slowed to a 9.027 in the final but won after Garrettson broke out with an 8.893. Robilotto, who also beat Ken Moses, Howie Smith, and Dave Long in eliminations, is now a four-time national event winner. For Garrettson, the news wasn’t all bad. Thanks to his runner-up finish, he’s now in the lead for the Super Comp national championship with his dragster, which is one of the slowest in the class with 120-mph finish line speeds.

Sixteen years after winning the NHRA Super Gas national championships and Ray Sawyer is still going strong. Sawyer collected career win No. 6 when after opponent Dale Koncen fouled in the final round. Sawyer missed the Tree with a .043 light but ran an uncontested 9.93 for the victory, which helped elevate him to second place in the national standings. Sawyer was nearly flawless in the semifinals with a .010 light and a 9.900 in his win over Jason Kenny. Current points leader Devin Isenhower made it to the late rounds but dropped his quarterfinal bout against Kenny.