The Sports Report: One single point 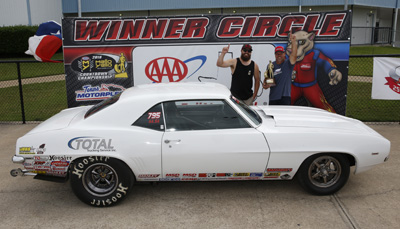 Needing nothing less than a victory to wrest the point lead from reigning Stock Eliminator national champ Justin Lamb, Brian McClanahan delivered the goods with a well-timed victory in the Lone Star State. Lamb, who is seeking an unprecedented feat of winning both the Stock and super Stock titles in back-to-back seasons, has already posted a robust score of 689 points, which in most years would be a nearly insurmountable total. Unfazed, McClanahan went to the final round in Dallas and defeated Jimmy Hidalgo Jr., Afterwards, the arithmetic showed McClanahan as the new leader in the clubhouse with a 690-point score.

“Yes, we went to Dallas because of the points, but I really didn’t look at it that way,” said McClanahan. “I just go to win every damn race. That’s what I try to keep my focus on. I didn’t look at this race any differently than any of the other ones. I know that might sound kind of strange but that’s what works for me. I actually thought briefly about not going to Dallas but my son, Ryan, was yacking at me for a whole month. Every time I said. ‘You know, we don’t have to do this.’  He fired back ‘Dad, we’re going.’ Now of course, I’m glad we did.”

McClanahan got off to a fast start this season when he reached the final round of the Arizona Nationals in Phoenix and then returned to Wild Horse Pass Motorsports Park a week later and won the track’s Division 7 Lucas Oil Drag Racing Series event. A win at the Sonoma Raceway divisional event, and a runner-up at his home event in Fontana provided more fuel for a run at the title. McClanahan has raced for many years but attributes his most recent success to a couple of factors including a renewed commitment to physical fitness and a race car that is both consistent and reliable.

“This year, I’m dialed-in,” said McClanahan. “I do a lot of practicing and that helps. I also learned a few things that I was doing wrong. The big things are diet, exercise, and getting the proper amount of sleep. I never used to pay much attention to that stuff but now I realize you need to take better care of yourself, especially as you get older. I believe it helps, especially in consistency. 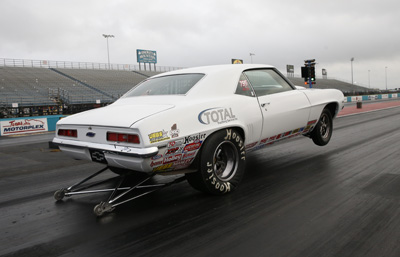 “Going back to last year, I finally have a car that I know I’m going to drive at every race,” McClanahan said. “Before we built a Super Comp dragster for Ryan to drive, sometimes I’d drive and sometimes I wouldn’t. Now, I drive this [AA/SA Camaro] full time. That has also made a difference. When you drive the same car, you get comfortable and you get in a routine. I think that’s what’s happened this year.”

In Dallas, McClanahan was able to find a consistent rhythm in spite of numerous delays caused by rain. Even though final eliminations were pushed to Monday, he was able to cut consistent lights in the face of what should have been mounting pressure. In the final against Hidalgo Jr., who is also fighting for a spot in the top ten, McClanahan left with a .017 light and turned on the win light with a 9.97 on his 9.94 dial after Hidalgo reportedly encountered a mechanical issue and missed his dial by nearly six-hundredths.

With the 2018 season now headed into the homestretch, McClanahan has a massive 690-point score and he leads Lamb by a single point. Four-time national champ Jeff Taylor is also lurking in the background with 632 points and two opportunities remaining in which to better his score at divisional events. Lamb has a single divisional left to claim. McClanahan has one divisional and two national events left to better his score and he’s convinced that he’ll need to in order to secure the title. For the record, no NHRA sportsman racer has ever scored 700 points and not win a championship although Jody Lang scored 699 in 2011, finishing second to Joe Santangelo’s 701-point effort.

“It’s always better to be ahead but don’t feel like this is over,” McClanahan said. “It might take 720 to win it. Right now, you have three guys who all have the possibility of being over 710 and chances someone or maybe all of us will improve. Jeff has two races left, which means we’ll probably see him in Las Vegas and Lamb has one race, but its in his backyard [Las Vegas]. He’s been so good there; it’s almost an automatic final. Thankfully for us, the hard stuff is done. We went to Woodburn, and Houston and Dallas and now we get to stay closer to home.

Should he hang on to win the national championship, McClanahan will be in good company. His father, Jerry, won three Stock championships in 1973-74, and 1978, and son, Ryan, was crowned the Super Stock champion in 2010. NHRA has celebrated a number of father-son or father-daughter championships including Jerry and Darrel Gwynn, Brad and Randy Anderson, David and Bo Nickens and John and Brittany Force, but there has yet to be three-generations of champions.

“Wouldn’t that be something?” said McClanahan. “It would be great if it happened. Of course, Ryan, would still say he was better because his championship came in Super Stock. Seriously, he’s a great help. He runs all the numbers and picks my dial-in and helps me drive the motorhome. I have to thank him, and also my wife, Susan, and daughter, Alex. We have to successful businesses and they keep them running while we’re gone. I also have to mention everyone that supplies parts for our cars. Gary Hansen built the car and Darrell Wikle builds our engines and we use stuff from ProTrans, A1 converters, Lamb, and Hoosier. We try to buy the best parts, so we don’t have any failures.”

The best of the rest: David Rampy’s quest for 100 national event wins will have to wait for at least one more week. Rampy drove to the final round in both Comp and Super Stock in Dallas and he came up short in both. In the Comp final, Rampy was inexplicably late off the starting line and could not catch opponent Clint Neff, who drove his K/AA roadster to his fourth national event title. Neff, who was also the winner of the 2017 Dallas event, had a tough road to the final with races against past national champions Bruno Massel and Craig Bourgeois.

Rampy also finished as a runner-up in Super Stock after dropping the final round against Brandon Bakies, who is one of several contenders for the national championship. Bakies picked the right time to win his first national event title, running right on his 9.68 dial in the final round. Rampy left first by a couple thousandths of a second but missed his 10.21 dial slightly with a 10.246. Bakies is now ranked third in the Super Stock standings, just 23-points behind leader Justin Lamb.

Jackson Collier joined his son, Koy, and brother, Steve, as a national event winner by taking the Super Comp title over Steve Williams. In one of the best side-by-side races of the weekend, Collier left first by a hundredth of a second, and won on a holeshot by .0061-second, 8.921 to 8.912. All three Colliers are currently ranked in the top 30 in the Super Comp national standings. Collier was particularly effective in his quarterfinal race against Taryn Green, which he won with a nearly-perfect 8.901 pass. 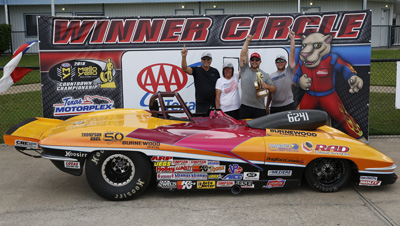 Casey Plaizier joined his father, Eddy, and sister, Frankie Giroux as a national event champion when he turned on the win light in the final round of Super Gas. Plaizier, a previous national event finalist in Comp and Stock, gave up a .004 to .018 advantage in the final round but rallied to win with a 9.921 after opponent Joseph Lokhaug broke out with a 9.884. Plaizier’s biggest win might have come in the semifinals when he used a perfect 9.900 run to take out the four-speed Camaro of recent St. Louis champ Tim Nicholson.

A year after winning the Division 4 Super Street title, Val Harmon has not slowed down a bit. After winning the Chicago event in June, Harmon struck for his second national event title of the season and third overall when he drove his Nova to a final round win over Barney Barnhart. Harmon gave up a slight advantage at the start but was closer to the mark at the finish line with a 10.94 to 10.98 victory. Harmon was also sharp on the starting line with a pair of nearly perfect reaction times during eliminations. 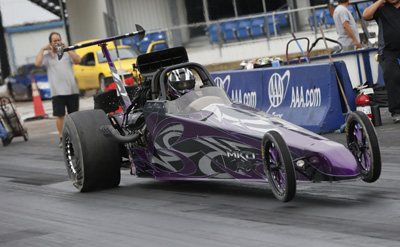 In Top Dragster presented by Racing RVs.com, it took a quick 6.408 just to make the 32-car field but qualifying was not a problem for eventual winner Darian Boesch, who was the No. 9 seed with a 6.09 in his supercharged dragster. Boesch was solidly in the 6.0s for most of eliminations and then won the final round with a 6.11 on his 6.06 dial to stop Mallori Rogers, who trailed with a 6.288 on her 6.25 dial. Boesch, who also competes in the Top Sportsman class, defeated Shane Eperjesi in the semifinals to advance to his first national event final.

The Top Sportsman presented by Racing RVs.com class welcomed a first-time winner after Lance Rutland defeated Bryan Warr in the final round. Rutland left first and ran right on his 7.66 dial for the win after Warr, the 2018 Phoenix champ, broke out with a 7.007 on his 7.03 dial. Rutland, the runner-up in the South Central Division points standings last season, qualified near the bottom of the field in his ‘63 Corvette but was consistent in eliminations with two 7.68 runs and three-straight 7.66 elapsed times to close the deal.