The Sports Report: The long road to victory 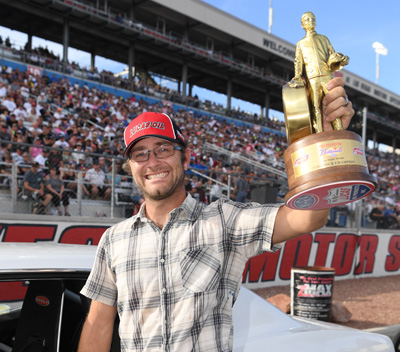 “No journey is too long when one finds what he seeks.” – Old Chinese proverb.

After winning his first national event at the NHRA Toyota Nationals, Division 3 Stock racer Chris Stephenson can relate to that bit of ancient Chinese wisdom. Stephenson, who calls Tipton, Ind., home, has racked up a few highway miles this season by towing his E/SA ’68 Firebird to 16 of the 24 national events contested thus far including the JEGS SPORTSnationals in Bowling Green. After a slow start, Stephenson’s long pursuit of a national event Wally came to a fruitful end in Las Vegas where he defeated Indiana neighbor Jeff Taylor in the final round.

“Is it [the win light] really on? That’s exactly what I was thinking,” said Stephenson, after the final. “In a way I wondered what was going to go wrong. I felt like something was going to happen and my win light wasn’t’ going to come on. I just kept my faith and confidence and patience and gave it my best shot and here we are. It’s great.”

Stephenson, runner-up in his three prior national event finals, including the 2017 Auto Club Finals in Pomona, has competed in a total of 17 NHRA events last season but this year he upped his game by entering a combined 23 national and divisional races. Stephenson opened his season in Phoenix in February and also raced in the national and divisional events held in Las Vegas on back-to-back weekends in April. Stephenson later ventured West again to compete in all three events of the Western Swing and also raced in Brainerd, Indy, and St. Louis. For all the hard work, Stephenson had just two semifinals to his credit before going the distance in Las Vegas.

“This feels like the end of a long journey because it is,” said Stephenson. “I’m self-employed so I was able to take the time to travel. I had to make a lot of sacrifices, but it was all worth it. I wanted to race a lot and win my first one. Some of the best racers that I know all say the same thing which is that in order to win, you have to go to more races. My goal is to get some sponsorship to be able to race more and I not only wanted to win, but also to prove that I was actually committed to racing a full season and was able to follow through with it.”

During his extensive travels, Stephenson not only got a lot of seat time in his Pontiac, but he also got to see almost everything the United States has to offer from coast to coast. Thanks to his extensive racing schedule, Stephenson has visited every State except for Maine, Alaska, and Hawaii. 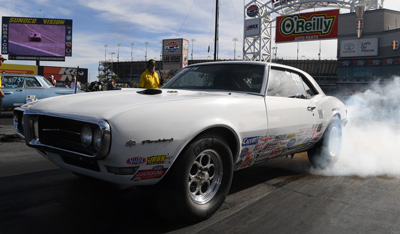 “I have to say Sonoma was my favorite race, but after all the travel, I also concluded that in America everyplace might be a little different but they each have their own thing that makes them special,” Stephenson said. “That’s what makes this country worth loving.”

In Las Vegas, Stephenson was paired with his uncle, Marion, in the first round, and came away with a victory in a double-breakout. Grandfather, J.B., aunt, Lisa, cousins, Wayne and Nichole are also avid NHRA sportsman racers.

En route to his first win, Stephenson also benefited from a round three red-light by opponent Bill O’Connor in his 16-second front-wheel-drive Plymouth. Although the red-light made it a moot point, Stephenson chose an unconventional strategy against O’Conner by dialing the index (11.90) instead of his previous 11.11 to close the gap on his slower opponent.

Stephenson finished his drive to the final with strong performances in his wins against Dwayne Scheitlin and Larry DeForrest. He also took out Dwight Machael’s B/SA ’62 Fury in the semi’s. Paired with 45-time national event winner and current championship contender Jeff Taylor in the final, Stephenson got off the starting line first, .017 to .044, and held on for the win with an 11.221 on his 11.20 dial. Taylor ran right on his 9.50 dial with a 9.501 but came up seven-thousandths short at the finish line stripe.

“I’ve run Jeff a few times and I think this is the second time we’ve raced this year,” Stephenson recalled. “I’m not sure where I got him, but I think it was in the last sixty-feet of the track. I was close. I couldn’t have done this without the help of my wife, Dionne, my friends in Division 3 and my faith in the Lord. I also want to thank Gary Herche, my engine builder, Adam and Alan Bowdish of A1, Jeff Beckman, Ben and Benjamin Board, Don King, Johnny and Stephanie Diekema, Zimmerman Bros. Machine, Lucas Oil, NHRA and Mello Yello. I can’t imagine a more perfect day.”

The best of the rest: Stephenson wasn’t the only Division 3 racer to hit the jackpot in Las Vegas. David Billingsley of Decatur, Ill., claimed his fifth career win after driving his D/EA Camaro past Doug Engels’ D/ED in the final round. Billingsley, whose most recent win came at the 2013 JEGS SPORTSnationals in Columbus, scored a key quarterfinal win over low qualifier Jim Greenheck to earn a bye run into the final round. Billingsley was docked .11-second in CIC penalties before the final but that paled in comparison to Engels, who was penalized in every round and found himself down .25-second before the final. Not surprisingly, Engels fouled in the final, slowing Billingsley to coast to the win. 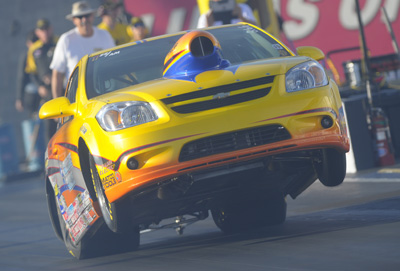 Reigning Stock and Super Stock national champ Justin Lamb continued his epic tear through the NHRA class racing ranks with his sixth win of the season and the 23rd of his career. Lamb, who swept the Stock and Super Stock titles at the Spring Las Vegas race, won the final against five-time Super Stock champ Jimmy DeFrank. Not surprisingly, both drivers were on their respective games in the final with Lamb converting a .011 light and a .02-over 8.76 into the win against DeFrank’s .022 light and 9.102 on his 9.08 dial.

Lamb remains the current points leader in Super Stock and while he couldn’t earn points in Las Vegas, his final round win was key since DeFrank is also in title contention. 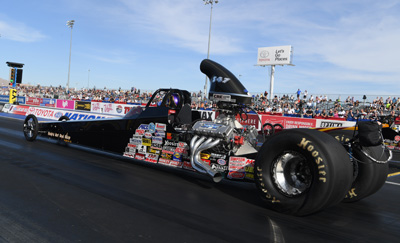 The Super Comp field in Las Vegas featured a number of drivers still in contention for the national championship but none of them made the final round. Kevin Wright, who claimed wins at the Pomona season opener in 2010 and 2012, added a third title after Ken Mostowich fouled by just four-thousandths of a second in the final round. Wright opened eliminations with a nearly perfect 9.051 on the 9.05 altitude adjusted index and knocked off national event winners Robert Naber, Marko Perivolaris, and Mark Grame to reach the final. Mostowich, driving his ’68 Camaro against a huge field of dragsters, topped title contender Tom Stalba to earn a bye into the final.

For the second time this season, Matt Blodgett wheeled his family’s nostalgic ’72 Vega to a win in Super Gas. Following his victory in Sonoma, Blodgett earned his third-career title by beating Rob Willis in the final round. Blodgett was almost perfect in the final round with a .007 light and a 10.057 on the 10.05 altitude adjusted index. Willis was competitive with a .021 light but broke out with a 10.041 in his ’92 Firebird. Blodgett also defeated Alan Savage, low qualifier Brian Preszler, and Loreen Rogers to earn a bye into the final. The points lead in Super Gas did not change hands although Aaron Kinard was able to close the gap on current leader Devin Isenhower by reaching the quarterfinal round.