The Sports Report: With a little help from our friends 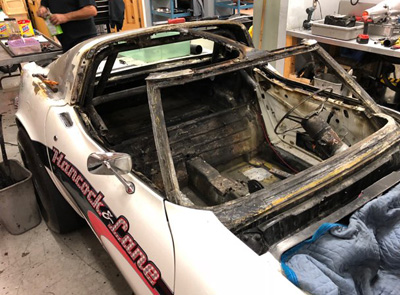 Jeff and Cody Lane’s 2018 season was almost over before it began. En route from their home in Washington to Pomona for the Lucas Oil NHRA Winternationals, the Hancock & Lane team encountered every racer’s worst nightmare; a trailer fire. The fire began when the battery in the team’s new Corvette Stocker shorted. The fire burned the Corvette badly and also heavily damaged the other two race cars in the trailer, the team’s Comp Eliminator Cobalt and Super Stock Cavalier. The trailer also sustained heavy damage, as did most of their support equipment.

“Our friend, Steve Schwab, was driving our rig and he was about eight miles from Pomona when the fire broke out,” Cody Lane recalled. “Dave Barcelon was following our rig and he noticed the smoke. They pulled over and went to work with fire extinguishers and the Fire Dept. was there within minutes and they got the fire out. Steve honestly saved our whole rig. He got the truck disconnected from the trailer and did everything he could to minimize the damage. Without him, we might be out of business for years.”

“I wasn’t there when the fire happened, and my phone had died” Lane said. “I turned it on and I had about 25 texts that said fire. At first, I thought they were joking and then when I realized they weren’t my heart sank. When we built the Corvette, it was the first time that my dad and I had partnered on a car. I sold my daily driver to built it. We thrashed for six weeks to get it ready for Pomona and all that work went down the drain.” 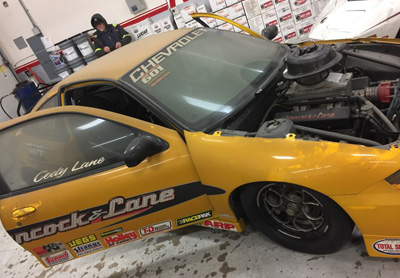 After a long ride home, the Lanes were able to evaluate the damage and their initial assessment was not positive. The Corvette, a car that had been months in the making, had extensive body damage and the interior was almost completely destroyed. Upstairs in the stacker trailer, the Cobalt and Cavalier also suffered heavy damage, mostly from smoke. Since the Hancock & Lane team is known for their meticulous attention to detail, they quickly made the decision to completely disassemble all three cars and inspect every part.

“The Corvette was bad but I think the two other cars got the worst of it,” Lane said. “All the smoke went upstairs. It went through the headers and into the engines and it rusted the block and every nut and bolt that was exposed. Almost everything was oxidized. I had a Coan converter on my car that was nice and polished and shiny and now it’s just black. That’s what the smoke and heat can do.”

With a number of friends and fellow racers pitching in to help, Lane estimates that there have been over 600-man hours invested in getting the cars back on track. A month ago, Cody’s father, Jeff Lane posted the following on the team’s Facebook page:

“Well, it feels like we are finally turning the corner with the race cars,” he said. “We keep cleaning and cleaning and cleaning parts, but it is almost over. Assembly is on its way; we all need to get out racing and we have our sights set on Las Vegas. We are going to use borrowed trailers and if all goes well this week, I think we will make it. Our ‘bad attitude’ race team just keeps on showing up and working hard, so thank you boys for your incredible dedication to this sport we love.”

The Corvette is still under repair, and likely won’t be ready to race until mid-summer. The team is also awaiting the return of their trailer, which was totaled, but sent to Georgia in order to be rebuilt nearly from the ground up. Regardless, they were able to return to action at the recent Denso Spark Plugs Four-Wide Nationals with the Cobalt and Cavalier. A storybook ending would have had the Lanes win at least one title in Las Vegas but that didn’t happen. It wasn’t however, for a lack of effort. Jeff went out early in Comp, but Cody nearly carried the team Super Stock with a class win and a strong semifinal finish. His chance at a miracle finish ended with a breakout loss at the hands of two-time Stock national champ Brad Burton. 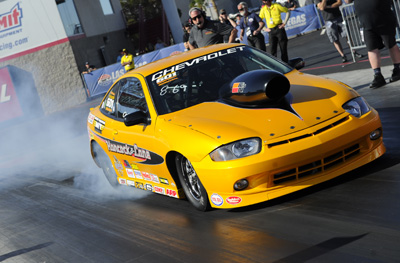 “It was great to be back in business,” Cody said. “At the end of the day I would love to have won but I lost a great race to Brad. Just to be out there racing again felt good. It was something that we both needed to do.”

Despite the loss, Lanes did not leave Las Vegas empty handed. They were honored during pre-race ceremonies with the Edelbrock Never Rest Performer of the Race award.

“That Edelbrock Never Rest award was a testament to our crew and everyone who helped us out,” said Lane. “It was also for the wives and girlfriends, and the rest of the family members who were so understanding. They emphasized with us. We took six weeks to prepare our cars before Pomona and then another six weeks to get back out here.”

“The whole deal was very humbling but at the same time you realize how much the racing community cars,” Lane said. “We had so many people reach out to us and so many donations. The outpouring of support we got was really the silver lining that makes you realize why we do this.”