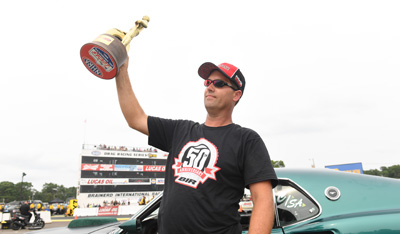 Minnesota is known as the Land of 10,000 Lakes and when it comes to events at Brainerd Int’l Raceway, there also seems to be a similar number of racers from the Line family. Most NHRA fans are very familiar with Pro Stock champion Jason Line, but the racing Line clan also includes his parents, Lawrence and Maxine, brothers, Lance and Ben, sister, Stephanie Diekema, niece, Hannah, and aunt, Marlene Nelson.

With six members of the Line family in competition in Stock Eliminator, the odds of at least one of them reaching the winner’s circle were pretty good and that’s exactly what happened when Ben won the Lucas Oil Nationals for the second-straight year. Driving his C/SA ’69 Mustang, Ben ran his Brainerd win streak to 14-consecutive rounds and capped off the win with a win over Randi Lyn Shipp in a heads-up, no breakout battle between C/SA entries. The Line family business centers around building racing engines, primarily for NHRA class cars, to it wasn’t a shock to see Line get the best of Shipp’s ’67 Firebird, 10.538 to 10.679. Just in case his performance advantage wasn’t enough, Line also helped himself with an almost-perfect .009 reaction time.

“Before the final, we did everything we could think of to get the car to pick up,” said Line. “We cooled the engine, changed the oil, and heated the transmission. My brother, Lance builds the best motors, and my brother, Jason also helped me. I couldn’t have done this without them.” 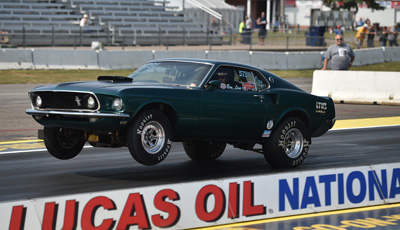 The only downside to having six cars in the field is that its almost inevitable that Line team cars will have to race against each other at some point and that happened in round one when Line was paired with his mother, Maxine, in her F/SA ’68 Chevelle. After an even start, Ben turned on the win light after Maxine broke out by .025-second at the finish line.  From there, Line was mostly on point with wins against former world champ Glen DeMenge, Al Corda, Larry DeForrest, and Scott Dugdale before earning a bye into the final round.

“Winning this race back to back is amazing,” Line said. “I never would have dreamed it would happen.”

The best of the rest: Brainerd regular Brian Johnson is a versatile racer who has achieved success in everything from motorcycles to dragsters. Johnson grabbed his first national event Wally in the Super Stock class when he drove his SS/KA Duster to a final round win against Jason DeForrest. The final was decided on a red-light start though Johnson would have been tough to beat after running right on his 11.16 dial-in. Earlier in the weekend, Johnson drove to wins over Bill Zaskowski, Randall Klein, Marion Stephenson, recent Topeka winner Mike Mans, and Division 2 ace Jeff Adkinson, who fouled in the semifinals.

Three months ago, in Topeka, Don Nichols reached the final round of Super Comp before he was turned away by first-time winner Danielle Jarimillo-Miller. Nichols quickly made amends for that loss when he earned his first national event title in Brainerd. Paired with Donald Leisdon in the final round, Nichols grabbed a big lead at the start and prevailed in an 8.899 to 8.877 double breakout battle. Throughout the six-round race, Nichols was extremely sharp on the starting line with five reaction times of .012 or quicker including a .004 in the final. He also tagged the 8.900 index perfectly in his quarterfinal win against Austin McClure, who wasn’t far behind with an 8.908. 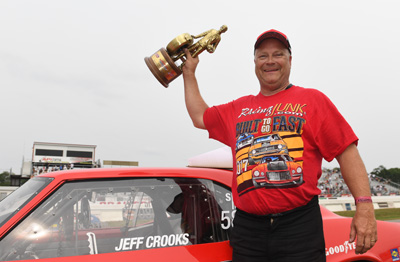 The Super Gas class produced another first-time winner in Jeff Crooks, who picked up the victory after final round opponent Tom Carlson fouled by five-thousandths. The Manitoba-based Crooks, in his ’67 Firebird, made his way through eliminations with a string of nearly-perfect lights. He was also good at the finish line when necessary including a perfect 9.900 pass that held off Scott McMaster’s perfect .000 reaction time in round three. In that battle, Crooks turned on the win light by a scant .0009-second.

J.R. Lobner took a big step towards a potential national championship in Top Sportsman presented by Racing RVs.com when he claimed his third win of the season. After a pair of divisional victories in Denver and Topeka, Lobner won the third national event title of his career when he drove his ’96 Cutlass past Michael Freischel and his Firebird in the final round. Lobner held on to win by .001-second with a 7.559 on his 7.54 dial. Lobner’s path to the final round included wins against Alan Firestone, Dan Schei, Royce Lee Freeman, and Jeff Southerland. Lobner’s semifinal win against Southerland was also close with a .005-second margin of victory at the finish line stripe.

The Top Dragster presented by Racing RVs.com class produced another first-time champ in Todd Fleck, who won the title on a single run after Ross Laris broke. Fleck capped of the win with a competitive .007 reaction time. Fleck also scored wins against Joseph Hessling, Scott Murray, and Matthew Kreft en route to his maiden victory. Fleck’s best performance came against Murray when he ran a 7.391 on his 7.39 dial to light the win light.