The Sports Report: Joe Mozeris knows Comp Eliminator, and a recap of the Sportsman action in Vegas 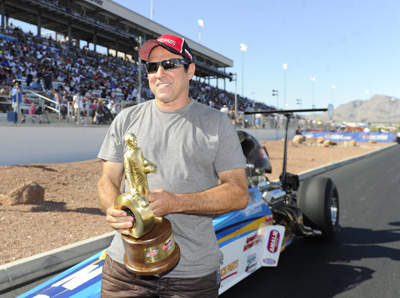 Five years ago, Joe Mozeris got to celebrate in the winner’s circle at The Strip at Las Vegas Motor Speedway after his daughter, Kayla, claimed the Stock Eliminator title at the spring NHRA  event. As rewarding as that experience was, Mozeris couldn’t help but dream of the day when he might be fortunate enough to hoist his own national event Wally. That quest was fulfilled during the Denso Spark Plugs Four-Wide NHRA Nationals after Mozeris drove to a final round win over Scott McClay in an all-dragster Comp final. It was the culmination of a dream nearly two decades in the making.

“I went to Phoenix earlier this year and I lost in the first round in Comp and Top Dragster and I was pretty disgusted,” said Mozeris. “It was all because of my driving. I was red in one car and dead late in the other and I was so unhappy that I thought about not even going to Las Vegas. I think if it wasn’t for Kayla being entered in Super Stock with her car, I may have skipped it. Thankfully, it worked out. It’s funny sometimes how things come together. My driving definitely came around.”

Mozeris has also steadily worked to refine the combination in his Mopar-powered dragster, which is backed by NAPA Auto Parts. In Las Vegas, he qualified No. 4 in the quick field with a (-.581) 7.039, and was consistent throughout the event.

“We’ve done a lot of little things to this car that have started to add up,” Mozeris said. “We got a carburetor from Bob Book that helped make the car consistent and also helped with my lights. We also got a new converter from Coan Engineering that helped out program quite a bit. Mostly, we’ve just fine-tuned the car and it's responded.”

During eliminations, Mozeris lost five-hundredths to a CIC violation in his round one win over Jeff Lane, but he managed to keep his index intact for the remainder of the event including his wins against Randy Jones and Tom Mettler. By the time he got to the final round, Mozeris still had more than enough in the tank to deal with McClay, who hadn’t lost any index after his first three opponents all fouled out. McClay grabbed a slight lead at the start, but his (-.516) 7.454 wasn’t enough to hold off Mozeris, who won with a (-.562) 7.008. Ironically, Mozeris’ last final round appearance came at the Division 7 event in Fontana last year and his final round opponent was also McClay. 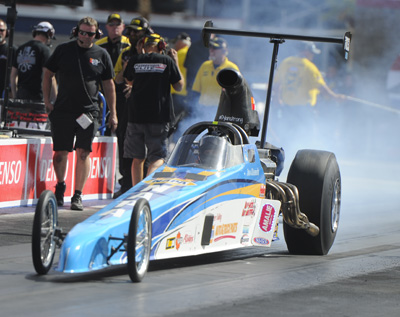 “I wasn’t really worried too much about the final,” Mozeris admitted. “My car was running good and in the heat of the day my car is probably less affected than the cars with small motors. I didn’t know how much [McClay] had left but I thought I could probably run with him. I had a good feeling but going downtrack it was too close to call. We were only five-thousandths apart at the finish line, so I didn’t know I’d won until I saw the win light. It was emotional, but I think it was relief more than anything.”

The scene on the starting line was also emotional as Mozeris’ crew, including daughter, Kayla, shed a few tears while celebrating a long-awaited first victory.

“When you get the trophy, you realize that’s the whole reason why you do this,” said Mozeris. “I think before I even got back to the trailer I had people texting me and sending me the video from [NHRA All Access]. I didn’t see it right away, but I think I’ve watched it a couple hundred times since then. It was all very emotional.” 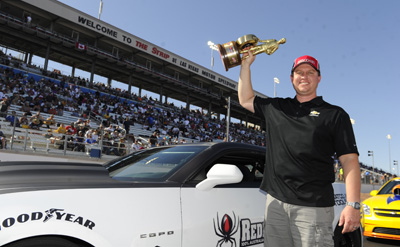 First up for Lamb was the Stock final and his opponent was one of the toughest drivers in the Pacific Division, reigning Chevrolet Performance U.S. Nationals champion Larry Gilley. After an even start, Lamb pulled ahead in his COPO Camaro and turned on the win light with a 10.025 on his 10.01 dial. Gilley was just .003-second behind after an 11.043 on his 11.03 dial.

With the Stock title safely tucked away, Lamb returned a few minutes later to take on two-time Stock national champ Brad Burton in the Super Stock final. That bout ended quickly after Burton fouled by two-thousandths. Lamb, who has always had great success in final rounds, has now run his record to 21-10 in national event finals.

Less than a year after winning the Super Gas title at his home event in Denver, Bradley Johnson scored again when he earned the Las Vegas win in Super Comp. Johnson was solid with a .021 light and a 9.067 on the 9.05 altitude-adjusted index to stop former Stock national champ Ryan McClanahan, who trailed with a 9.081. Arguably, Johnson’s biggest win of the weekend came when he stopped red-hot Val Torres Jr. in the second round of eliminations.

Michael Miller is now a nine-time national event champion after driving his 23-T roadster to a victory in Super Gas. Miller, who won the Spring Las Vegas event in 2009 and 2015 and the fall event in 2016, earned his fourth title at The Strip after stopping Aaron Kinard in the final round. Kinard cut a perfect .000 reaction time but broke out with a 10.019 on the 10.05 index while Miller posted a less offensive 10.037 to earn the title. 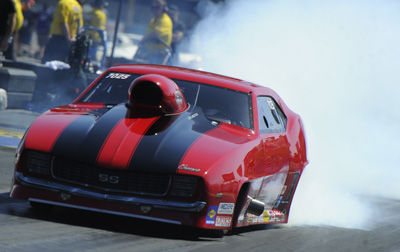 The Top Sportsman presented by Racing RVs.com class produced a first-time national event winner after Bud Preuss turned on the win light in the final round Preuss won the final round after opponent Jeff Gillette fouled by .005-second. Even if Gillette hadn’t red-lighted it might not have mattered since Preuss was perfect off the starting line with a .000 reaction time. En route to the final, Preuss also topped Top Sportsman regulars Richard Okerman, Chip Rumis, Don Meziere, and Jeff Connelly.

Nearly three decades after his first national event win at the 1990 Sonoma event, Mike MacBrair returned to the winner’s circle in Top Dragster presented by Racing RVs.com. MacBrair gained a slight lead against Steve Casner, in the final round and held on for the win with a 6.617 on his 6.60 dial. Casner, last year’s No. 3 ranked driver, broke out by .012-second with a 6.738. MacBrair’s path to the final was tough with races against multi-time national event winners Anthony Bertozzi and Kyle Seipel.