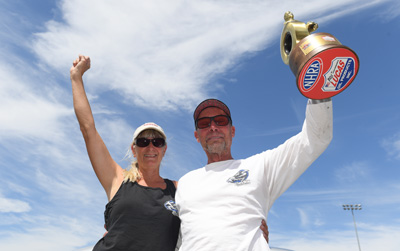 The Top Sportsman presented by Racing RVs.com class is not for the faint of heart. Featuring a bracket racing format among the quickest 32 full-bodied cars in the field, the class has become a home for professionally-built race cars that more closely resemble Pro Mod or Pro Stock cars than weekly bracket racers. It’s also not uncommon for most event winners to run deep into the six-second zone.

And then there is Ken Ratzloff, who clearly marches to the beat of a different drummer. Ratzloff races a ’53 Studebaker than he built by himself in his shop in Idaho Falls, Idaho. The car is equipped with a 632-cid engine but does not use nitrous oxide, a supercharger, or a turbocharger.

Ratzloff has spent time in the NHRA Hot Rod Heritage series, where he’s run in the 7.60-index A/Gas class. In Sonoma, he entered the Top Sportsman class and with elapsed times in the 7.20s, he qualified No. 29 in the 32-car field. He also stuck around long enough on Sunday to hoist his first national event Wally trophy.

“This is awesome; I can’t believe crowed here,” said Ratzloff, as he was being introduced in front of the sold out main grandstand at Sonoma Raceway. “I did have one lucky round but mostly we were on top of things. The car ran good and the driver did a hell of a job today.” 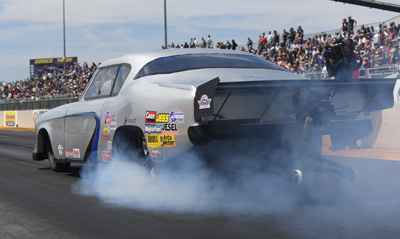 Ratzloff wasn’t kidding about his driving, particularly in the late rounds. After a .040 reaction time in his quarterfinal win over Keith White, Ratzloff got serious with a .014 light in the semifinals against No. 3 qualifier Joe Roubicek, and he won the final with a .004 light against Ted Kellner, who was seeking his third Sonoma win after back-to-back Top Sportsman titles in 2014-15. Ratzloff sealed the deal with a 7.230 on his 7.20 dial while Kellner was just four-thousandths behind with a 7.314 on his 7.29 dial.

“I built this car from scratch at my shop,” Ratzloff said. “I built the motor and transmission and I’m pretty proud to compete against guys with professional cars and professional engines. You know how tough this class is.”

The best of the rest: Don Keen won the Stock Eliminator national championship in 1990 and 28-years later he’s still going strong. Keen has also been racing the same ’65 Mustang for decades and in Sonoma, he claimed his first national event win since the 2014 Winternationals when he stopped Mark Kirby’s SS/JA Duster in the final. Keen’s driving was consistent throughout eliminations and in the final, he put together an almost unbeatable combination with a .021 light and a perfect 10.315 on his 10.31 dial. Kirby broke out by eight-thousandths with a 10.242. Afterward, Keen noted that his most recent win was his most meaningful because “the older you get, the harder this becomes.” 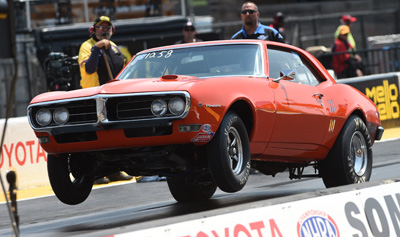 Transmission builder Leo Glasbrenner is now a seven-time national event champion after wheeling his D/SA Firebird to a dramatic final round win over Jody Lang. Glasbrenner actually trailed by .03-second off the starting line but made up for it with a 10.595 on his 10.59 dial. Lang missed his 12.16 dial with a 12.224 in his N/SA Malibu. Earlier in eliminations, Glasbrenner defeated world champ Justin Lamb, multi-time national event winner Doug Lambeck, and recent Epping winner Randi Lyn Shipp. Of Glasbrenner’s seven wins, six have come in Stock and the other in Super Stock eliminator.

Super Comp champ Robert Naber has five wins and three of them have come at Sonoma Raceway. Naber, a former professional motocross rider, picked up his latest Wally after a narrow 8.911 to 8.920 victory against Matt Woodard. Naber began eliminations with an impressive run that included a .002 light and an 8.904 against Thomas Bayer. He later scored wins against Val Torres, Trey Vetter, and Eric Reyes. Naber defeated Reyes with a perfect .000 light and an 8.932. Woodard was the low qualifier thanks to an 8.901 pass and went on to score a huge semifinal win over seven-time national champ Peter Biondo.

Matt Blodgett became the third member of the Blodgett family to score a win in Sonoma when he drove his family’s ’72 Vega to a final round victory against Ron MacKenzie, who fouled by .12-thousandths. Blodgett, who’s only other national event win came at the 2008 JEGS Pacific SPORTSnationals in Fontana, cut a perfect .000 light on his quarterfinal bye run and then took out former national champ Rick Beckstrom in the semi’s with another great run that included a .010 light and an index-matching 9.902. Blodgett broke out by eight-thousandths. Super Comp winner Naber also had a solid outing in Super Gas, reaching the quarterfinal round. 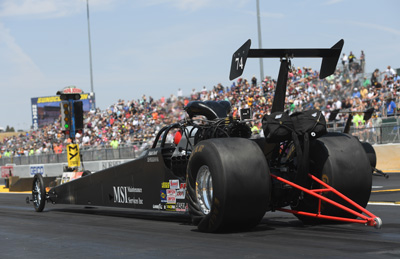 John Richardson admittedly had some luck en route to his first win in the Top Dragster presented by Racing RVs.com class. Richardson was set to race Andy Spiegel in the final round but his dragster didn’t leave the starting line due to an air bottle that was not activated. Richardson sat on the starting line for nearly four-tenths of a second but won the race after Spiegel fouled by four-thousandths of a second. Driving one of the quickest cars in the field, Richardson worked his way to the final with wins against Dan Provost, Mark Yeager, Chris Thode, and Mark Colton. Against Thode, Richardson paired a .014 light with a 6.007 on his 6.00 dial, the quickest allowable dial in the Top Dragster class.