Four-time world champ Kevin Helms has made the transition to his new role as a crew chief at Don Schumacher Racing, but he's still as competitive as ever with an Atlanta victory.
08 May 2018
Kevin McKenna, NHRA National Dragster Senior Editor
The Sports Report 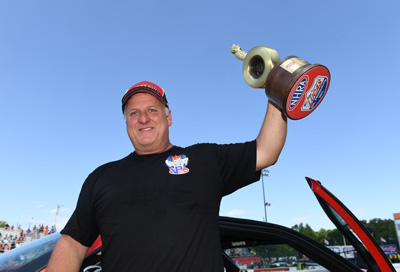 A lot has changed for Kevin Helms since he won his fourth NHRA Lucas Oil Drag Racing Series Stock championship in 2015. After spending more than a decade working with the Teuton family on their Houma, La.-based Southland Dodge team, Helms moved from Louisiana to Florida last year and began to pursue a career in Real Estate.

Helms also took a job with Don Schumacher Racing as the lead mechanic and tuner of the new DSR Drag Pak Challenger program for the School of Automotive Machinists & Technology NHRA Factory Stock Showdown. In that capacity, Helms works with DSR driver Leah Pritchett. The team will soon have a second Dodge that will be driven by longtime Pro Stock racer Mark Pawuk. Helms appears to be a perfect choice to head the DSR program given his long history of success and vast experience with the Drag Pak factory race cars. His influence was felt immediately when Pritchett qualified in the top spot in Charlotte with an 8.04, one of the quickest Factory Stock runs to date.

One might be tempted to think Helms would not have much time to pursue his own racing endeavors given his busy schedule, but that would be a mistake. Helms might not get to race as often as he would like, or race as many cars as he would like to, but it’s obvious from his results in Atlanta that he’s still very effective when he does compete. Racing his trusty Olds Achieva, Helms earned career win No. 28 when he beat Byron Worner in the final round.

“This is like being retired,” said Helms. “[Racing] one car is pretty easy." 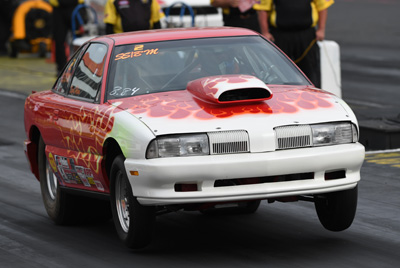 Even though Helms raced Dodges almost exclusively during his time in Louisiana, he still owns a couple of race cars, including the Olds that he drove in Atlanta.

“I still own this [Super Stock] car and the ’69 Camaro that I won three Stock championships with,” said Helms. “Once in a while I like to take them out. [The Southern Nationals] is one of the closest national events to me now that I moved to Florida."

Despite his extensive work as a crew chief, Helms hasn’t forgotten how to drive, although he did get a scare in Atlanta when semifinal opponent Jake Sealey grabbed a more than three-hundredths advantage off the starting line. Helms recovered to win after Sealey missed his dial and went on to win the final, the 44th of his career, after Worner fouled.

The best of the rest: Van Puckett claimed his second career Comp win, and first since the 2011 season, after Brian Browell fouled in the final round by eight-thousandths. Puckett, whose G/AA Cavalier was one of just three full-bodied cars in a field dominated by dragsters, slashed .09-second off his index during his early wins against Al Ackerman, Pat Ross, and reigning world champion David Rampy. Puckett won on a holeshot in his battle against Rampy, thanks to a .015 to .040 starting-line advantage.

Jeff Strickland has now won at least one national event for each of the last six years following a win in Stock. Strickland, driving his GMPartsNow.com COPO Camaro, made a nearly perfect run in the final round with a .005 light and a 9.280 on his 9.28 dial but didn’t need it after opponent Robbie Shaw left five-thousandths ahead of the green light. Strickland earned a bye in the quarterfinals after a win against Randi Lyn Shipp and later defeated James Williamson, a runner-up a week ago in Charlotte. Strickland now has 17 national event wins, including two in Atlanta. 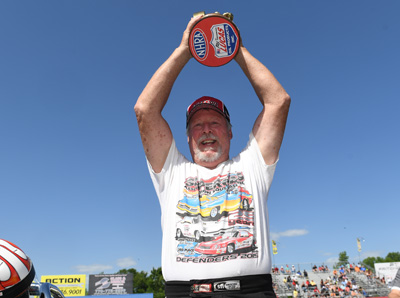 Gene Quinn has been racing for nearly four decades and he has earned six Wallys but had yet to win a national event before stopping Lauren Freer in the Super Comp final. Quinn gave up a six-thousandths advantage off the starting line but made up the difference to win. Earlier, Freer finished as a semifinalist in Super Gas. Quinn’s best race came in the semifinals, where he beat Tony Helms’ perfect 8.900 pass thanks to a .005 reaction time. The margin of victory was just .001-second.

Four years after winning the Top Sportsman title in Atlanta, Tommy Turner returned to the winner’s circle after a win in Super Gas. Turner was nearly perfect on the Tree in round two with a .001 light in his win over Jeremy Hancock, and he won the final with a solid performance that included a .005 light and a 9.922 to defeat Carl Watts, who broke out with a 9.867. In addition to his Top Sportsman win in Atlanta, Turner also has five runner-up finishes in national event competition.

With Super Street contested at just a handful of NHRA events, Keith Mayers made the trip to Atlanta from his hometown in Delaware and was rewarded with his second career national event title. Mayers drives one of the most unique cars in the 10.90 class, an ’85 Porsche that has been fitted with a Chevy engine. In Atlanta, he nailed the 10.90 index in the second round and later claimed a double-breakout win against U.S. Nationals Comp champ Brad Plourd. In the final, Mayers was safe with a 10.926 while opponent Jesse McKnight ran under the index with a 10.884. 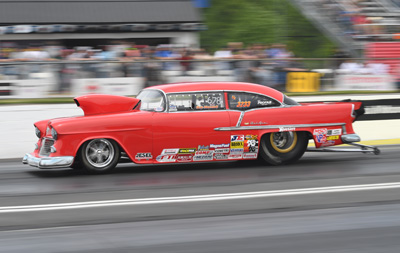 Bob Mandell Jr. and his son, Bob Mandell III experienced triumph and tragedy en route to their win in Top Sportsman presented by Racing RVs.com On Saturday, Mandell III was involved in a two-car accident that resulted in the passing of fellow Top Sportsman racer Randy Alexander. Mandell III was not injured and returned to help his father earn his third national event win following an emotional final-round win over Vince Hoda. Determined to win the race as a tribute to his late friend, Mandell was almost perfect on the starting line and drove his ’55 Chevy to a 6.856 on his 6.84 dial for the victory.

Les Feist snared a long-awaited first national event win following his runner-up finish at the 2016 Chicago event when he topped Larry Roberts in the final of Top Dragster presented by RacingRVs.com. Feist, who had one of the quickest cars in the field, won the final with a 6.085 on his 6.08 dial while Roberts missed his 6.16 dial with a 6.202. Feist also topped Casey Spradlin and Ross Laris, the father of Charlotte winner Holden Laris. Roberts was appearing in his second final in as many weeks following his runner-up finish to Holden Laris at zMax Dragway.