The Sports Report: Fifth time is a charm 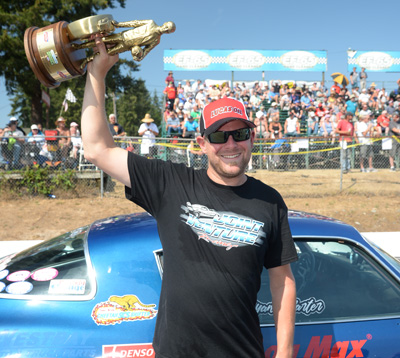 It took a little longer than he had hoped, but Ryan Warter finally joined the ranks of NHRA event champions when he defeated Randi Lyn Shipp in the final round of the CatSpot NHRA Northwest Nationals in Seattle. Warter won the all-Pontiac final round in Stock by a narrow margin, driving to the win by just .011-second. Coming off a frustrating yet impressive string of four-straight runner-up finishes at Pacific Raceways, Warter was finally able to join his father, former Comp racer Jim, as a national event winner.

“I’ve dreamed about holding one of these [Wally trophies] my entire life and finally did it,” said Warter via his Facebook page. “Those who are close to me knew how bad I wanted this not just for myself, but mostly for my dad. To finally get the first win in Stock was awesome, and a national [event] to top it off. Being in the final the past four years and coming up short each time just made me want it more. I changed a few things in my driving in the Stocker a few weeks ago and it paid off. Going into the final I knew Randi Lyn Shipp was going to be tough; she’s a bad ass behind the wheel and a super nice person. 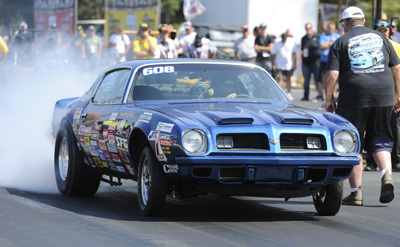 Racing at his home track, Warter lost in the first round in Comp which gave him more time to concentrate on his remaining Stock Eliminator entry. Warter could not have been happy about his opening round opponent, Pro Stock ace Drew Skillman, who was coming off a big Stock win in Denver. Warter’s J/SA Firebird runs in the high 11-second zone, so he finds himself getting chased more often than not. Skillman had to wait nearly three seconds to chase down Warter and he broke out by .003-second in the process.

Warter sailed through the next three rounds to earn a crucial bye run in the semifinals. His best performance, by far, came in the quarterfinals where he defeated veteran Bill Bushmaker by just .006-second in a race where both drivers were nearly perfect on both ends of the track.

The best of the rest: There were just 10 Comp Eliminator cars in Seattle but nearly all of them were competitive. Bryan Hyerstay successfully defended his 2017 Comp title after he downed Ralph Van Paepeghem in the final round. After identical lights, Hyerstay, in his Volkswagen-powered G/Dragster, opened up the lead and held on to win with a (-.555) 8.825 to Van Paepeghem’s (-.488) 7.322. Hyerstay now has four wins, all of them coming since the 2016 Chicago event.

Justin Lamb has already compiled a perfect three-win score in national event competition this year in Super Stock so his most recent win in Seattle did not count towards his points total, but it did add to an amazing resume that now includes 24 national event wins in 34 final rounds. Lamb, driving the quickest car in the field, was able to overcome opponent Kory Alby’s perfect reaction time in the final round to take the win with an 8.519 on his 8.50 dial. Lamb also stopped Alan Falcone, Vince Storms, Cody Lane, and Dave Barcelon to reach the winner’s circle. Lamb has now won five events this season including a Super Stock/Stock double at the Las Vegas four-wide race.

With a dozen wins to his credit, Steve Williams is one of the sport’s most successful Super Comp/Super Gas racers but his shot at a 13th title will have to wait after Greg Krause got the better of him in the Seattle final. Krause, the winner of the 1994 Topeka event, picked up win No. 2 via a holeshot when his 8.937 held off Williams’ 8.918 to win by eight-thousandths. Krause had a difficult road to the final with wins over John Dalrymple, Thomas Bayer, and Mike Shannon, last year’s second-ranked Super Gas driver. Krause was at his best against Shannon with a .019 light and an 8.906.

A week after winning the Toyota NHRA Sonoma Nationals, Robert Naber make it to another final round in Super Gas, but Gene Kelly got the best of him in a great side-by-side final round. Kelly was first off the starting line, .011 to .019, and held on for the win by a narrow margin, 9.909 to a quicker 9.905. For Kelly, the victory was redemption after losing the 2017 Seattle final to Dan Davis. Kelly earned his second shot at a win after defeating Rod Souza in a double-breakout battle in the quarterfinals. 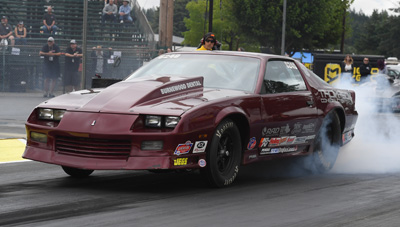 Francesca Giroux became the 84th different woman to win an NHRA national event title after claiming the Super Street title in her ’84 Camaro. Giroux won the final against Steve Beggerly’s ’68 Firebird in a 10.891 to 10.870 double breakout. Giroux was almost unstoppable early in eliminations specifically her round two win over Gary Emish that included a .014 light and a 10.901. Later, Giroux topped five-time national event winner Ryan Herem in a tight 10.988 to 10.984 battle that was decided by just .004-second at the stripe.

Bryan LaFlam has been honored with the Best Appearing Car award at an NHRA national event for his colorful ’67 Mustang, and now he is a national event winner in Top Sportsman presented by Racing RVs.com. LaFlam had one of the quickest cars in Seattle and also one of the most consistent with a string of low 6.3-second runs. In the final against James Rutherford, LaFlam got off to a nearly-perfect start with a .002 light and drove to a 6.342 on his 6.31 dial for the victory. Rutherford broke out by a thousandth of a second with a 7.559. En route to the final. LaFlam topped Greg Anderson, who fouled, and Shawn Herbst, who also broke out.

Steve Casner has now won six national event titles including the last two in Top Dragster presented by Racing RVs.com following his final round win over Andy Spiegel in Seattle. Casner, who most recently won the 2016 Sonoma race, ran right on his 6.69 dial in the final top hold off Spiegel’s 6.723 on his 6.71 dial. Casner was also quicker off the starting line by .007-second in a typically close Top Dragster race. Casner reached the final round following wins against Bernie Plourd, Thomas Bayer, Taylor Vetter, and Dan Provost.