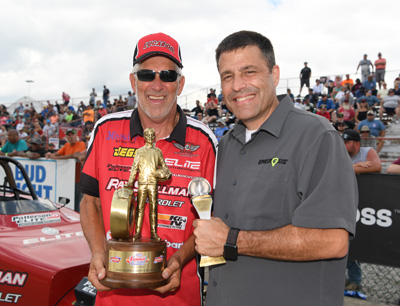 It’s often been said that it’s impossible to make a living as a sportsman drag racer but apparently, no one ever told Dan Fletcher and David Rampy. Risk-takers who elected to tackle the NHRA Lucas Oil Drag Racing series without the benefit of personal wealth or a core business to support their endeavour, Fletcher and Rampy have reaped the rewards and today, they are two of the four most successful drivers the sport has ever produced. Fletcher won the Super Comp title in Norwalk to secure his 104th national event victory and a few minutes later, Rampy responded with career win No. 97 in Comp Eliminator. Only Funny Car star John Force (148) and Top Alcohol Funny Car icon Frank Manzo (105) have more national event wins.

Given their respective successes, it is no surprise that Fletcher and Rampy have now shared the winner’s circle 13 times at an NHRA event including twice last season. The pair have also crossed paths many times in head-to-head competition including three times in national event finals. Rampy has prevailed in three of them including their most recent tiff in the Super Stock final at the 2015 Charlotte Four-Wide event.

Rampy, now with five wins in Norwalk, all of them in Comp, expertly guided his Skillman Auto Group A/EA Bantam through the competitive field. The fifth-quickest qualifier, Rampy protected his index through wins against John Frech, James Smith, and Pat Ross. By the time he reached the final against Jim Primozic Jr., and his C/AA Cobalt, Rampy had lost just three-hundredths to CIC violations while Primozic had lost six-hundredths. That proved to be critical after Rampy won with a (-.530) 7.260 to a (-.503) 7.377.

“It has been a while, since Denver last year,” said Rampy, referring to a rare  winless drought that had existed since last July. “I was starting to get concerned but we just keep beating at it. This year, my wife, Kelly, took a break to go on tour with Barry [Davis, crew chief] and I. It was nice to finally win one of these with her here to enjoy it with me. 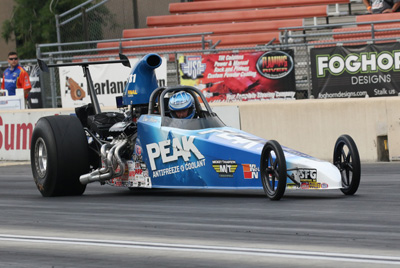 Fletcher had previously won national events at 22 different facilities but had never won an event at Summit Racing Equipment Motorsports Park until he defeated Brian Folk in the Super Comp final. Fletcher was able to slow to a 9.44 for the win after Folk red-lighted by four-thousandths of a second. Fletcher’s most memorable round came in the semifinals where he cut a perfect .000 light against opponent Tyler Schnieder and needed most of it in a close 8.926 to 8.924 holeshot victory.

Fletcher, who has won just two of his 104 NHRA Wallys in the Super Comp class, was celebrating his second win of the season following his Comp Eliminator victory at the Pomona season-opener.

“I’m happy; Obviously this was such a difficult weekend for racers, fans, and the NHRA workers,” said Fletcher. “To get the race in in was tremendous. I don’t know if I’ve ever been to an event as a sportsman racer where I felt so not in the loop and not knowing what you’re doing next. It was pretty arduous for everyone involved. That was the crazy part to me.”

Collectively, Fletcher and Rampy have combined to win 201 NHRA national event titles and appeared in 308 final rounds. They also have seven national championships between them. Both drivers have occasionally hinted at retirement, and to that end they no longer attend all 24 national events, but given their recent successes, they both remain fiercely competitive.

The best of the rest: Thirty-four years after winning his first national event title at the SPORTSnationals event held at Lucas Oil Raceway Indianapolis, John Di Bartolomeo is still going strong. The editor of Drag Racing Edge magazine and a member of the Northeast Division Hall of Fame, DiBartolomeo earned his second win in Norwalk and his second in Super Stock by driving past another veteran, Bob Marshall, in the final round. DiBartolomeo used a 9.402 on his 9.38 dial to turn on the win light while Marshall was close behind with a 9.342 on his 9.40 prediction. 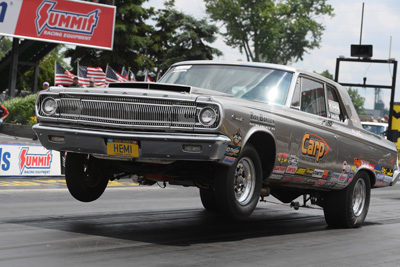 Driving Al Carp’s wheelstanding AA/SA ’65 Dodge Coronet, New Jersey’s Todd Hoven earned his first win since the 2009 Charlotte race by topping Dick Kincaid’s E/SA Chevy II in the final. Hoven left first and ran right on his 10.08 dial for the win. Earlier, he survived a close call against two-time national champ Jeff Strickland, who cut a perfect .000 light in round two. Hoven countered with a .014-second package to claim a narrow victory.

Tom Dimond made his way through a very tough field of Super Gas racers to claim his first NHRA national event title behind the wheel of his Armor Paving ’27-T Ford roadster. Dimond made it to the final where he emerged the winner after a close double breakout battle against Joey Shipp. Dimond turned on the win light with a 9.882 to Shipp’s 9.876 in one of the most competitive battles of the weekend. Dimond also topped Ray Miller II, Pat DeBottis, and Leo Zynda en route to his first national event final. 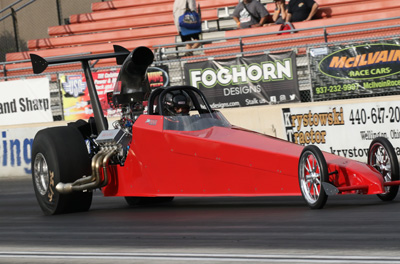 Another first-time winner was crowned in Top Dragster presented by Racing RVs.com where John Biagi drove to the title over California’s Bobby Ray McMahan in the final round. Driving a new car that was less than two weeks old, Biagi won the final in a double-breakout with a 6.383 on his 6.39 dial while McMahan was further under his dial with a 6.198 on his 6.21. The No. 26 qualifier, Biagi defeated chassis builder Danny Nelson, Patty Fisher, Frank Carpinelli, and Justen Moser on his wat to the final.

For the second time in the last month, Dusty Meyer found the winner’s circle in Top Sportsman presented by Racing RVs.com. The reigning Division 5 champ and winner in Topeka, Meyer faced a tough final round opponent in Mark McDonald and turned in his best performance of the weekend with a .002 light and a 6.977 on his 6.96 dial. McDonald tapped the brakes at the finish line and slowed to a 6.630 on his 6.59 prediction. Meyer was remarkable on the starting line with lights of .012, .016, .015, and .002 in his last four rounds.