The Sports Report: A bet on Proctor is no gamble 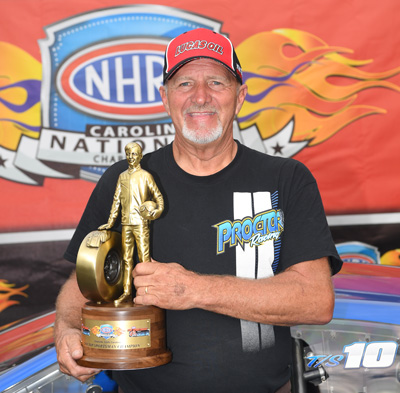 A year ago, Ronnie Proctor was one of those guys who raced hard and hoped that his drive and determination would one-day allow him to hoist an NHRA Wally trophy. Proctor checked that item off his to-do list earlier this year with a win in Gainesville and now, after claiming a second national event title in Charlotte, he’s got a solid shot at winning the season championship in Top Sportsman presented by Racing RVs.com.

“They told me after the first one that they’d come a lot easier; I can’t say that it was easier, but two in a year is fantastic,” said Proctor. “Gainesville was my fifth final round so it was such a big relief to finally get it done. I honestly didn’t expect to get a second win this season. I hoped that I’d win more, it just came a bit sooner than I had expected.”

Proctor isn’t the type of racer who obsesses over points so he had no idea that he’d taken the lead in the battle for the national championship until after he’d beaten opponent Jackie Robison in the final round. With the win, Proctor increased his total to 589 points. J.R. Lobner is second with 575 and Doug Crumlich is third at 570-points. All three racers have one divisional event remaining where they can improve their scores. They are the only three drivers still in contention for the national championship.

“I’m not a very good points counter so I didn’t know any of that coming into the final,” said Proctor. I know that Lobner came from Kanas because this was the final national event for Top Sportsman. He was ahead of me but went out in the third round. I figured I was going to gain on him but didn’t know that I was in the lead. My friend, Jamie Brooks [son of fellow Top Sportsman racer Jeff Brooks] keeps me updated and after the final he told me I was in the catbird seat.”

Proctor qualified his six-second Mustang in the No. 11 spot in the quick field and drove one of the best races of his career in eliminations. He used lights of .005, .009, and .012 to get past his first three opponents, including last year’s championship runner-up, Sandy Wilkins. Proctor won that bout in a close double-breakout.

“They are all good racers, but the best run was against Sandy was the best one,” Proctor said. “My car got out of the groove a bit and I could hear rocks hitting the inside of the wheel tubs. I’m pretty sure I scrubbed off enough speed; otherwise I might have run further under than he did. I have been a runner-up twice in Charlotte but I also crashed a car there so it’s been both good and bad to me.”

Before the final round, Proctor had to wait for opponent Robison, who had earlier thrilled the Charlotte fans by saving an out-of-shape run in his semifinal win over Dylan Stott. Proctor’s first national event win in Gainesville came on a single run when Lester Johnson couldn’t make the call in his ’55 Chevy and he didn’t want his second win to come the same way. 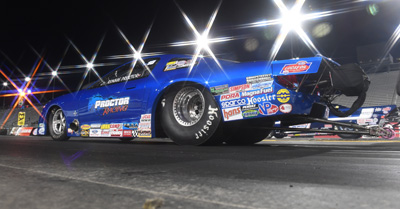 “They called us to the staging lanes and we sat there and waited on him,” said Proctor. “They ran all the other final rounds and finally I was getting ready, just putting my helmet on and he showed up. I’m glad he did but I could tell by his dial-in that he was probably broken. He was dialed 6.68 and he should have been on a 6.63 or 6.64. Just to be sure I put an extra hundredth in my delay box so I didn’t red-light against him. At the 1,000-foot mark I knew I had some room so I was able to get hard on the brakes.”

As for the championship, Proctor will enter his final divisional event next weekend in Rockingham, N.C. and will most likely have to wait until the Division 7 final in Las Vegas on Nov. 2-4 to see if Lobner and Crumlich can pass him. If he finishes first, second, or third in the standings, Proctor is content knowing that he’s already enjoyed the best season of his long career.

“This year, I learned to stop being so stressed out and just let it happen,” said Proctor. “I think that’s been the difference. It’s funny that I’ve raced for 40 years and just figured out how to relax. I like my chances [or winning the championship] a lot better than I did a few weeks ago but I’m not getting overconfident. I’m just going to Rockingham to do my best and we’ll see what happens after that.

“I’d say we’re really blessed to be where we are,” said Proctor. “It’s just me and my wife, Karen, and we work as a team. Thankfully, I have a durable car that doesn’t require a lot of maintenance. The only think I told Karen is that I wish all this was happening when I was 30 years old and not 61 but if it ended tomorrow, we’ve had a great time.”

The best of the rest: Appearing in his first national event final, custom home builder Art Hodges delivered his first win when he drove his C/Altered Camaro to a final round win over Danny Holt’s C/EA. Entering eliminations as the No. 6 qualifier, Hodges drove to wins over Joel Warren, Wes Leopold Jr., and Randy Daniels before earning a bye into the final. Down .09-second in CIC penalties, Hodges won the final with a (-.561) 7.249 to Holt’s (-.419) 8.171. Holt had .11-hundredths taken off his index during his early round wins over championship leader Frank Aragona Jr., Van Puckett, and Larry Pritchett.

Herbie Null bagged his fifth-career win in Super Stock and his first since the 2009 Gatornationals when he claimed a narrow win over Joe Lisa in the final round. In a battle of 1987 model year Camaros, Null left first by .014-second and held on for the win with a 9.799 on his 9.75 dial. Lisa was .02-second behind at the finish line with a 10.292 on his 10.24 dial. Null defeated Kevin Riner to earn a bye run in the quarterfinals and then topped Corey Taylor in the semifinals. 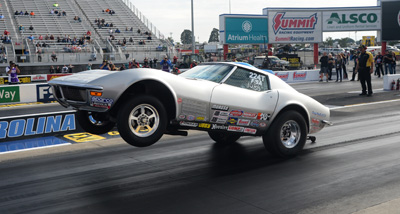 Terry Taylor was perfect off the starting line with a .000 light in the Stock final but didn’t need it after opponent Anthony Fetch spun the tires and slowed. Taylor, who was a runner-up at the 1994 Englishtown race in his first national event final, was also perfect in the semfiinals after opponent Marvin Dunahoo was a no-show. Taylor’s quarterfinal win came against former Pro Stock driver Roy Hill. Fetch, a five-time national event champ including the 2013 Charlotte race, ran right on his 9.92 dial in the semifinals to beat Katie Sepanek, who also matched her 11.44 dial.

Corey Manuel made it to his first national event final in Super Comp and made the most of it when he stopped six-time Northeast Division champ and current championship contender Tom Stalba. Manuel left first .010 to .045 and held on for the win with an 8.930 to Stalba’s 8.894 breakout. Manuel’s path to the final incudes a win over current championship leader Chris Garretson, Zack Fisher, and a semifinal victory against Lee Ream. In the other half of the semifinals, Stalba topped Anthony Fetch, who went on to a runner-up finish in Stock Eliminator.

Most races in Super Gas are decided by just a hundredth of a second or so and the final in Charlotte was no different. Just a thousandth of a second separated Joe Fisher from Phil Smida off the starting line and Fisher, the 2017 Atlanta Top Dragster winner, collected his second title, 9.912 to breakout 9.885. Fisher’s best run came in the quarterfinals where he paired a .009 light with a 9.905 to beat eventual Super Comp winner Corey Manuel. Fishe, who raced in his third final of the season in Charlotte, also topped George Caheely in the semifinals. 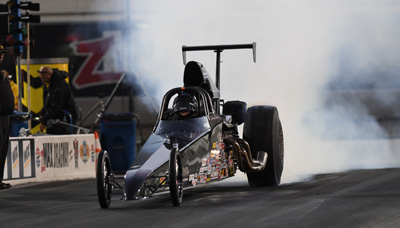 The final national event of the year featuring the popular Top Dragster presented by Racing RVs.com class was won by Anthony Bertozzi, who claimed the 21st national event title of his career and his second in the last four events when he beat J.B. Strassweg in the final. The low qualifier in the quick field, Bertozzi won with a 6.030 on his 6.01 dial while Strassweg was close behind with a 6.093 on his 6.07 dial. Bertozzi got a free run in the semifinals after Angie Travis broke while Strassweg scored a win against two-time national champ Jeff Strickland, who fouled out by a thousandth of a second.