Runs as good as it looks 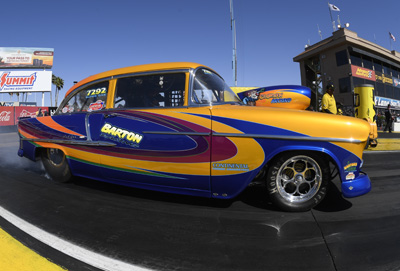 Todd Barton’s ’55 Chevy Super Gasser attracts a lot of attention because, for one, it is one of just a handful of vintage Chevy “shoeboxes” remaining in NHRA competition. The car also features an eye-catching paint scheme which is important to Barton because he makes his living as a graphic designer and work, including, rendering, logo, hero card, and t-shirt design, is prevalent throughout the racing community.

Pretty paint and shapely appearance aside, Barton’s ’55 Chevy also happens to be a very competitive race car and he proved it with a convincing win at last weekend’s NHRA Arizona Nationals at Wild Horse Pass Motorsports Park. Barton was respectable throughout eliminations, but he shone brightest in the final round where he coupled a .010 reaction time with a 9.905 to freeze out Val Torres Sr., who crossed the finish line second, and broke out by a thousandth with a 9.899. For Barton, the win broke a national event dry spell that goes back to the 2004 season, when he won the Super Comp title at the spring Las Vegas race.

After the final, Barton was quick to point out that his second win was even more emotional than his first, primarily because his 8-year old son, Troy, was there to see it.

“The last time I won one of these [NHRA Wally trophies] my son wasn’t born,” said Barton. “He’s eight now and a heck of a Jr. Dragster racer. “It means so much for my boy and my dad and my wife to be here. It doesn’t get any better than that.

Asked about the final, Barton was keenly aware that he needed his best performance to stop Torres. Two weeks ago, Torres’ sons, Val Jr. and Gabriel, raced in the Pomona Super Comp final with Gabriel winning his second NHRA event. 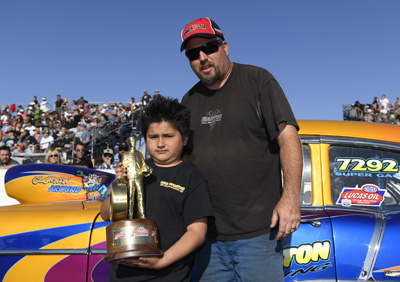 “The Torres family is synonymous with winning these deals,” said Barton. “They know what they’re doing, and they give you a real tough run. I knew Val was going to be tough and he was. I just happened to come out on the right end of it. I was fortunate to get by.”

Barton also noted that his family has been racing a ’55 Chevy since 1971. Barton’s current car was built using parts from another car was previously raced by his father, Donald. As happy as he is to win the Phoenix event, Barton knows that his time in the driver’s seat is limited.

“My son is calling dibs on this car when he turns 16 and I’m all for that,” said Barton. “He’s already been in two [Jr. Dragster] final rounds this year and I couldn’t let him show me up. Honestly, I’d rather watch him race. I have a lot more fun.”

The best of the rest: Justin Lamb didn’t need to win another race to validate his 2017 national championships in Stock and Super Stock, but it certainly didn’t hurt his confidence to pick up an early-season victory. After a disheartening Pomona race that resulted in a pair of early exits, Lamb went the distance in Phoenix for his third win at Wild Horse Pass Motorsports Park. Wheelstanding his way through eliminations in his Chevy Cobalt, Lamb used a string of .01 and .02 lights to reach the final where he took on three-time national event winner Mike Cotten in his GT/KA ’70 Barracuda. Lamb grabbed a sizable lead at the start and collected the 19th national event victory of his career. 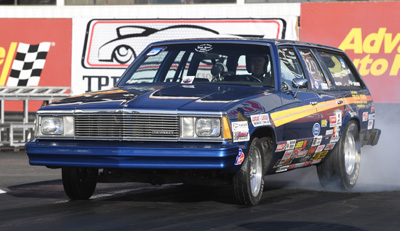 There is an art form to racing a lower-class car in Stock Eliminator and in the last three decades, Jody Lang has mastered it. Lang grabbed his 29th career NHRA win and fourth in Phoenix after final round opponent Brian McClenahan fouled by four-thousandths. Lang, driving his M/SA Malibu station wagon, eased to a 12.328 on his 12.17 dial for the win. Two rounds earlier, Lang ran right on his dial to defeat Gregg Luneack and he also tripped up two-time national champ Al Corda in the semi’s to earn a spot in his 44th career final. Ironically, Lang lost to Corda in his first final at the 1995 Phoenix event and he returned a year later to claim his first victory by beating Martha Thompson in the Stock final.

Before relocating to Coeur d’Alene, Idaho, Trevor Harkema made his home in the Phoenix area and got his start racing in the Street class at Wild Horse Pass Motorsports Park, so it was only fitting that he’d return to the track to claim his first national event title. Harkema battled a number of quality opponents including multi-time national event winners Trevor Larson and Thomas Bayer to reach the final where he was paired against Glen Kern. Harkema, who was .019 or better on every run in eliminations, delivered a .013 in the final along with a slowing 8.968 to stop Kern, who missed the Tree and lost in spite of a quicker 8.927. 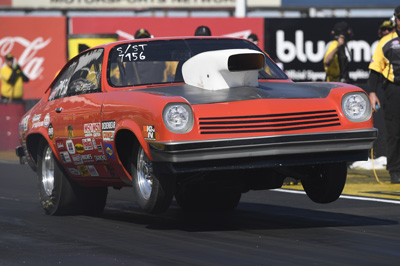 Another first-time winner in Phoenix was Super Street champ Dave Kiesel, who downed Chris Borges in the final round. Kiesel, in his ’76 Vega, used his best light of the weekend, a .005 to help take a double breakout win over Borges, 10.895 to 10.890. Kiesel, like Super Comp champ Harkema, has his roots in the Phoenix area and won his first Division 7 Lucas Oil Series event at Wild Horse Pass Motorsports Park in 2015. Earlier in eliminations, Kiesel topped another well-known Phoenix-area Super Street driver, Brian Griffey.

Last year, Paul Nero won the Top Dragster presented by Racing RVs.com title at the Sonoma event and made a strong push for the national championship before ultimately finishing second to Lynn Ellison. Now, Nero is ahead of last year’s pace after collecting his third national event title. With a best of 6.704, Nero qualified his nitrous-equipped dragster in the bottom half of the 32-car field, but he was consistent in eliminations including a dead-on the dial run in the second round to stop J.R. Lobner. In the final, Nero trailed Rodger Comstock’s nearly-perfect .002 light at the start but picked up the victory after Comstock broke out by .013-second.

Bryan Warr’s path to the win in Top Sportsman presented by Racing RVs.com began with a narrow win over six-time world champ Jeg Coughlin Jr., and also included victories against past Super Gas national champ Mike Ferderer and Ed Olpin, who won back-to-back Phoenix titles in 2014-15. The final featuring Warr and Bud Preuss began as a close race with both drivers sharp on the starting line. Downtrack, Pruess’ ’69 Camaro appeared to get loose and he slowed to a 6.851 on his 6.79 dial, while Warr collected his first-career win with a 6.978 on his 6.93 prediction.