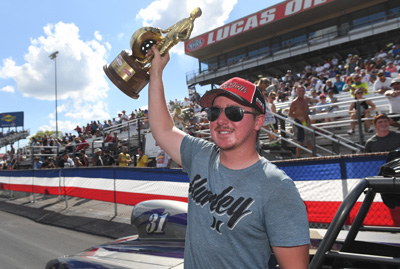 On Sunday, Sept. 2, Devin Isenhower posted the following on his Facebook page: “It’s getting brutal out here. Made it through with the roadster to be into the semis! Bowed out by .004 in the dragster after a great race. Racing on a Monday at the Chevrolet Performance U.S. Nationals, doesn’t get much better!”

Actually, it does get better. A lot better for Isenhower who fulfilled the dream of every drag racer by winning the Chevrolet Performance U.S. Super Gas title. At the age of 21, he’s already a Division 3 champion and now an Indy winner and he almost seems destined to win a national championship before all is said and done, perhaps even this season.

A win at Indy is special not just because of the historical significance of NHRA’s oldest and most prestigious event. Contested over six days, Indy is also a grueling marathon where sportsman competitors compete at random hours from 8 a.m. to 8 p.m. and must adapt to ever-changing track and weather conditions. Indy also happens to attract the best racers in each class from all over North America. This year’s 119-car field featured eight past national champions and a host of former division champions and national event winners including Isenhower, who doubled-entered in Super Comp and Super Gas.

Isenhower opened Super Comp eliminations in the best way possible with a perfect “trip-zip” .000 light against Brian Mileham, and used the momentum to record round wins against former Indy champ Heather Fetch, Division 1 ace Jack Sepanek, and chassis builder Ray Miller. Isenhower’s hopes for the Super Comp title ended in the quarterfinals with a narrow .004-second loss to eventual race winner Joe Hessling.  In Super Gas, Isenhower was equally as effective behind the wheel of his ’67 Camaro roadster with a string of competitive reaction times and close-to-the-index runs. Late in eliminations, with pressure at its greatest, Isenhower buckled down and produced a string of great runs including a .005 light and a 9.921 in his quarterfinal win against Jack Collier and a 9.920 in the semifinals against Charlie Kenopic, who broke out. The final pitted two of the North Central Division’s best when Isenhower took on Steve Hoyt. What should have been a competitive battle ended early when Hoyt slowed to a 10.271 and Isenhower lit the in light with a 9.907, narrowly avoiding a disastrous breakout run. 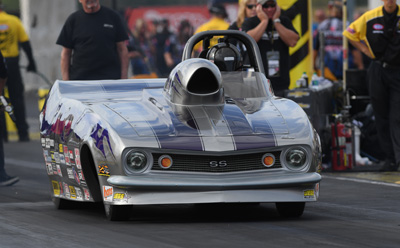 Isenhower’s breakthrough win at the Chevrolet Performance U.S. Nationals was hardly a surprise. He began his career racing Jr. Dragsters at Lucas Oil Raceway and over the last two years, his record at the famed facility is remarkable. He won the Super Gas title at the track’s Lucas Oil Series divisional event in 2017 and repeated the feat earlier this year. For good measure, he nearly doubled-up with a runner-up finish in Super Comp. It’s safe to say that Indy is his favorite place to race.

“Racing Junior Dragsters was a great foundation and it taught me everything I know today,” said Isenhower. “Without it, I don’t think I’d be able to be standing here [in the winner’s circle] for a long time.”

The best of the rest: The tally is now 98 and counting for sportsman icon David Rampy, who won the Chevrolet Performance U.S. Nationals for the fifth time in his Hall of Fame career. Using his usual conservative approach, Rampy managed to get to the final round of the 54-car field having lost just .02-second off his index to CIC penalties. Along the way, Rampy, the reigning national champion, drove his Skillman Auto Group A/EA ’32 Bantam to wins against Randy Jones, David Dupps Sr., former champ Craig Bourgeois, and low qualifier Raymond Martin. By comparison, Greg Kamplain, Rampy’s final round opponent, lost .14-second from his index which might help explain his -.004 red-light in the final. Rampy has two national events this season and needs just two more to join John Force, Frank Manzo, and Dan Fletcher in NHRA’s exclusive 100-win club.

More than a decade ago, Dennis Steward claimed his first NHRA national event title in Super Stock in Englishtown and he returned to the winner’s circle following a final round win over Dale Hulquist. Driving an FGT/L ’64 Plymouth owned by former track operator Carl Weisinger, Steward plotted his way through the huge 128-car field to win drag racing’s most significant title. After a little luck in his round two race against 1988 Indy winner Mike town, Steward took over with a combination of steady driving and a consistent race car. He matched his dial in a round four win over Larry Hodge and alsao beat Venice Perno, and David Barton before Hulquist fouled in the final round. 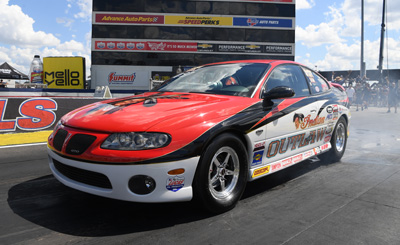 Much like Isenhower, Stock champion T.C. Morris is also quite familiar with Lucas Oil Raceway Indianapolis after winning the Lucas Oil Series event in 2017 and following with a respectable quarterfinal finish earlier this year. After a quarterfinal win over West Coast racer Brent Calvert, Morris ended Joey Shipp’s chances for an Indy double with a 10.981 on his 10.97 dial. Appearing in the first national event final of his career, Morris didn’t yield to the pressure and was solid with a .034 light and a 10.971 on his 10.96 prediction. He didn’t need it after opponent Jerry Emmons fouled in his B/SA Camaro. A round earlier, Emmons won a dramatic heads-up B/SA battle against Larry Hill on a holeshot, 10.18 to 10.17. Emmons has previously won 15 national event titles including the 1994 Indy crown.

Joe Hessling got his first taste of success on the national event level when he earned the Top Dragster title at the 2015 JEGS NHRA Northern SPORTSnationals in Columbus but even that win pales in comparison to his latest triumph in the U.S. Nationals Super Comp final. Facing one of the toughest opponents imaginable, four-time national champion Gary Stinnett, Hessling left first and then closed the door with a nearly-perfect 8.903. Stinnett, attempting to win Indy for the third time, wasn’t far behind with an 8.912. Hessling, who had one of the fastest cars in the field with a top speed of nearly 190-mph, also beat Super Gas winner Devin Isenhower in the quarterfinals and then topped 1982 Super Gas national champ Steve Eckard in the semi’s.