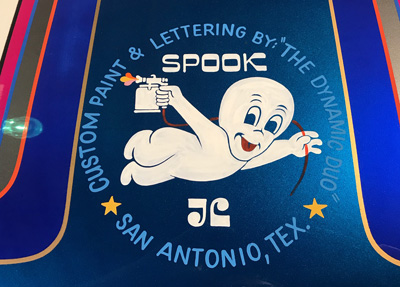 On Tuesday, Nov. 27, longtime NHRA Super Stock racer Forrest Pierdolla lost his long battle with cancer. The NHRA class racing community is a close-knit group, especially in the South Central Division where the Texas-based Pierdolla was one of it’s central figures for decades. A college football player who became a professional roofer, Pierdolla was better known to NHRA racers and fans for the 1968 Camaro Super Stock car that he raced along with partner Dan Reeves. The Pierdolla and Reeves Camaro wasn’t just one of the best-looking cars in Division 4, it was also one of the most competitive and it provided a number of memorable moments for Pierdolla including the 1987 Division 4 championship. Pierdolla also drove the Camaro to his lone NHRA national event win at the Texas Motorplex in 1991. At that event, Pierdolla defeated fellow Texan Keith Mawhee in the final round. He also drove to a runner-up finish at Houston Raceway Park in 1994, losing a tough final round to future Pro Stock kingpin Jeg Coughlin Jr.

“Forrest had a light about him that drew people to him, leaving him with many lifelong, truly great, and loving friends,” said his wife, Mary Jo Pierdolla. “He was so blessed. Forrest was a kind, gentle, loving, caring, wonderful man, who was known to be a little hard-headed from time-to-time. For the people who knew him, they loved him, and knew they were blessed and their lives were better for having known him. He will be greatly missed."

Pierdolla and Reeves began racing together when they were still in High School. Their Camaro was known as the River City Rat. A familiar sight at Alamo Dragway near San Antonio, the Camaro carried Pierdolla to a number of impressive wins during his career. In 1983, Pierdolla defeated Phil Webb in the Super Stock final at the now-defunct Green Valley Raceway. He also stopped his good friend, John Clegg in the final round of the Baton Rouge Lucas Oil Series event in 1987. In 1994, Pierdolla collected his third divisional win by beating four-time Super Stock champion Greg Stanfield in the final at Amarillo Dragway.

In September, Pierdolla posted on his Facebook page about the unusual circumstances surrounding his 1983 Green Valley victory.

“In our second year of NHRA Super Stock, Dan Reeves and I were there on Saturday morning,” he said. “We unloaded the car and made a couple of qualifying passes, I might add two tenths over our 10.75 index. Sunday morning brought nothing, but rain and the race was called and rescheduled for the following weekend. Well, that wasn’t going to work because my younger brother was getting married that Saturday night and we were in the wedding.

“Fast forward to Sat afternoon of the race and wedding. Dan receives a call from our friend, Barney Morvits at Green Valley Dragway and he says ‘If y’all can get here by in the morning you are already on the elimination ladder for Sunday since y’all qualified last week.’

“What great news Except we didn’t feel so great since the bachelor party was last night. Second, Barney’s car hauler was in the shop with the entire driveline laying on the floor. We did have the new u-joints so after the wedding and reception Dan and I go to the shop and install the new u-joints and driveline back into the car hauler. We load the car up and went to Green Valley. A cold front had come in making the track about two-tenths faster, which was exactly what we needed. Not once that dad did we ever put a dial-in on the window. We just kept turning on the win light that day. We took a sound beating the rest of that season, but I loved every moment.”

“Forrest and I were big rivals in high school,” Mary Jo recalled. “He was the star football player who scored the winning touchdown against my team, and I was the cheerleader. I did not like him! My brother had a race car and so did several of our friends from school. Forrest had a race car, and his was faster than any of ours. I did not like him at all, but everything was okay later in life. The rivalry was gone.” 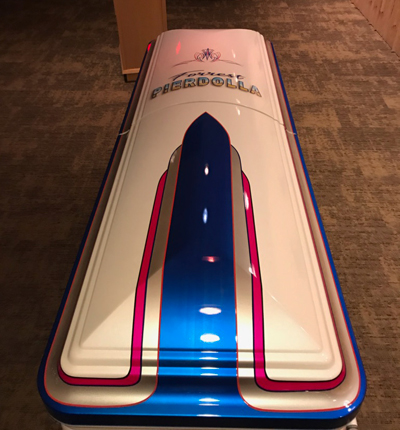 Throughout his career, Pierdolla’s prized Camaro wasn’t just known for being competitive, it was also considered one of the best looking cars in the Southeast Division and that was thanks in large part to Artie “Spook” Lund and Raymond “Rainman” Lund, and Joe Carrisales, who were responsible for the paint and lettering. As a final and most fitting tribute, Lund painted Pierdolla’s casket to match his race car and performed the job in less than five days.

“Raymond was still in high school and worked at his dad’s shop to paint the car,” Mary Jo recalled. “The first helmet that he ever painted was Forrest’s. When Forrest got a new one, he gave the old helmet back to Raymond, and it still hangs on his wall. I called Raymond the night before Forrest died and asked him if he could paint a casket. The reason I had the casket painted was, he loved his car, and so did everyone else. He was do proud of that paint job. I couldn’t think of a more fitting goodbye gift to give him. I know he’s smiling down on us right now.”