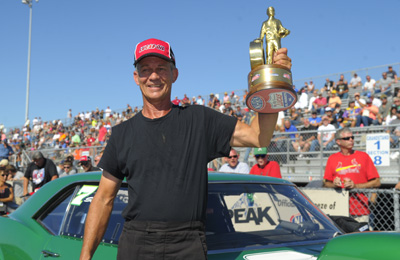 For most, the recipe for success in the Super Gas class is fairly straightforward. Take a tube-chassis race car, preferably a roadster, a big block engine with enough horsepower to run over 165-mph, and add a throttle stop, trans-brake, timer, delay box, and every other electronic gadget allowable and adjust as necessary to hit the 9.90 index. That approach has worked for countless national event winners over the last four decades, but Tim Nicholson feels the need to be different. An avid Super Stock racer, Nicholson not only favors full-bodied race cars, but he prefers they be equipped with three pedals.

To that end, Nicholson’s ’67 Camaro features a unique combination. The car is equipped with a manually shifted Lenco four-speed transmission similar to what one might find in an early 1980s era Pro Stock car. Nicholson also uses a clutch, but rather than launch with a pedal, he has a button mounted on the steering wheel that activates a solenoid that releases the clutch pedal. If that wasn’t enough, Nicholson has also taken the concept of a throttle stop and turned it on its head. Where most racers adjust for maximum top speed, Nicholson activates his throttle stop down track which allows him to hit the 9.90 index at speeds right around 100-mph. With most opponents bearing down on him at 160-to 170 mph, it’s difficult for anyone to judge a closing rate of 60-mph or more.

How many manually shifted cars have won national events title in Super Gas? No such records exist but it’s a safe bet to assume that hasn’t happened too many times since the formation of the class in the early 1980s.

“I’ve owned this car for 44 years and it’s been a race car for 43 of them,” said Nicholson. “I just like the idea of being different. It does not have a lot of power but it’s very dependable. I just charge the battery and put gas in it. For the four-speed Lenco, I manually shift it. I have all the MSD air pods to shift it with air but that’s a very boring ride. I’d rather pull the lever. I also have the clutch latch that I built 35-years ago. It’s been flawless. I let go of clutch with a button on steering wheel. 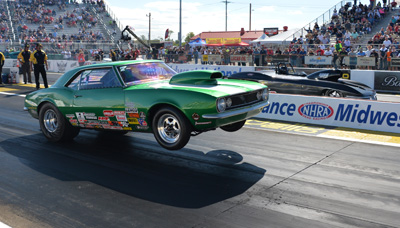 “Then I have the throttle stop in high gear instead of off starting line,” Nicholson continued. “At first, it was kind of a challenge to get a handle on it. We had a lot of trial and error. You don’t do much judging. I pretty much set on throttle stop settings. It’s really different having most of cars come by me 60 mph faster. You have to be accurate with settings on throttle stop. You blink an eye and they come by you so fast, and you think ‘Where’d they come from?’ the car is an absolute riot to drive. It’s a lot of fun. I won the Division 5 championship last year and finished top ten in national points. That’s something a guy like me from the middle of Kansas dreams of doing.

Nicholson’s faith in the untested combination was rewarded in the 2017 season when he reached the semifinals in Brainerd, won the Division 5 title, and finished No. 7 in the national standings. He’d done just about everything he could do with the car except win a national event and he took car of that in St. Louis when he defeated Mitch Withers in the final round. Nicholson ran right on the index in the final with a 9.904, but did so at 101.97 mph. Withers, in a ’63 Corvette roadster, broke out with a 9.856 at 149.48 mph.

“It’s electrifying to win my first national in this car,” said Nicholson. “I’ve won a couple in the Super Stock car that I drive, but this was my first in Super Gas. This car is absolute riot to drive. I know I’m the odd duck in Super Gas but it seems to be working. One of the guys I had to race this weekend pulled into the staging lanes and looked over at me and said, ‘Man, that was a bad choice.’ It’s nice to know they respect me.”

The best of the rest: The David Rampy watch is officially on after the future Hall of Famer claimed career win No. 99 in St. Louis. Rampy, who won his first title in 1983, drove his Skillman Auto Group A/EA Bantam to the Comp title after beating Allen Wilson in the final round. Rampy drove to a (-.560) 7.240 to secure the title while Wilson, who had a quicker light, ran a (-.472) 8.238 in his G/AA GTO. Rampy entered the final round with .02-second in CIC penalties while Wilson had lost .06-second off his index. Rampy also defeated Keith Mawhee, Travis Gusso, Chase Williams, and Duane Robison on his way to the final round.

For the first time since the 2011 Auto Club Finals, where he won his final Pro Stock title, Greg Stanfield earned a national event Wally. Stanfield, who has spent the last few seasons helping to launch the career of his son, Aaron, returned to his original stomping grounds in Super Stock and earned his 13th national event title. Stanfield faced off with the manually shifted Camaro of Brad Zaskowski in the final round and won with a 9.937 on his 9.93 dial. Zaskowski gave up the finish line with a 10.075 on his 10.04 prediction. Stanfield, who also builds the engines for SAM Tech Factory Stock championship contenders Arthur Kohn and Stephen Bell, overcame a perfect .000 light by round two opponent Slate Cummings, and also won a heads-up match against Korey Mawhee, who got an early lead with a .004 light. Stanfield reached the final by stopping former national champion Ricky Decker in the semi’s. 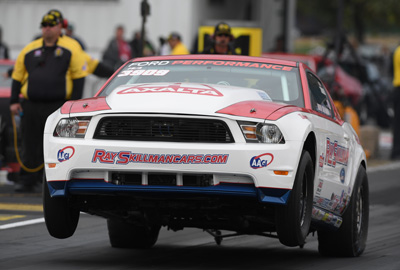 Drew Skillman’s runner-up finish in Pro Stock was made somewhat less disappointing after he earned his second title of the year in Stock eliminator. Wheeling his Cobra Jet Mustang, Skillman defeated Daryl Bureski in the final round to claim the 14th national event win of his career. Skillman was on time in the final with a .007 light and survived the double-breakout battle with an 8.864 on his 8.88 dial. Bureski, in his classic ’70 Cutlass 442, drove to an 11.421 on his 11.44 dial. Skillman defeated Lyn Smith and Brett Candies on his way to the final round.

The Super Comp class featured a first-time winner in Rick Hughes, who turned on the win light in the final with an 8.921 after Don Higgins broke out at 8.884. Hughes left first against all six of his opponents in eliminations including nearly-perfect lights against Eddie Cook and Scott Cook in the quarterfinal and semifinal rounds. Hughes, coming off a quarterfinal finish at the Chevrolet Performance U.S. Nationals in Indy, also logged wins against Doug Wegner and Chuck Ridenhour. Higgins reached the final following an 8.908 effort in the semifinals against third-generation racer Cole Cummings. 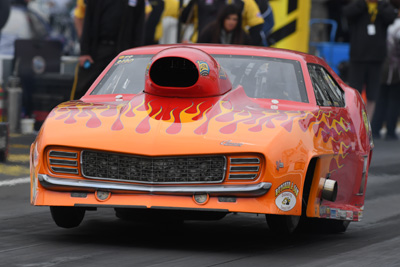 Driving his six-second Camaro, Glenn Butcher has had success in almost every circuit or association he’s raced in but an NHRA national event title had eluded him until he defeated Bill Yates to win the title in Top Sportsman presented by Racing RVs.com. The No. 5 qualifier in the quick field, Butcher drove to a 6.534 on his 6.51 dial in the final round to hold off Yates, who had a quicker light, but missed his 6.65 dial with a 6.717. Butcher had a tough path to the final with competitive races against Kyle Dumke, Tommy Turner, 10`7 JEGS Allstars champ Mark McDonald and multi-time national event winner Phil Unruh.

Two years ago in Brainerd, Jenifer White reached the final round of Top Dragster presented by Racing RVs.com in Brainerd and she was turned away by Angie Travis. White landed in another all-female final in St. Louis and this time, she won the Wally with a win against Afton Swanson. White did not have an easy time reaching the final with races against national champion Jeff Strickland, JB Strassweg, No. 3 qualifier Jim Thorp, and reigning champion Lynn Ellison. While’s best performance came against Ellison with a .019 light and a 6.172 on her 6.17 dial.