Predicting the next national champions is hard work, but here are ten racers who have never won a championship, but could easily breakthrough for a title in 2017
18 Jan 2017
Kevin McKenna, NHRA National Dragster Senior Editor
The Sports Report

Quickly scanning the numbers, more than 5,000 racers competed in at least one event in Comp, Super Stock, Stock, Super Comp, Super Gas, Top Dragster, and Top Sportsman last season and a significant number of those racers entered enough events to contend for the championship. The numbers alone make predicting a new championship a nearly pointless exercise but we’re going to attempt it anyway. Most of these drivers have come close to championships in the past, so they are acutely aware of the pressure involved in a lengthy championship battle. We’ll revisit this list in November and see how each of our candidates fared. 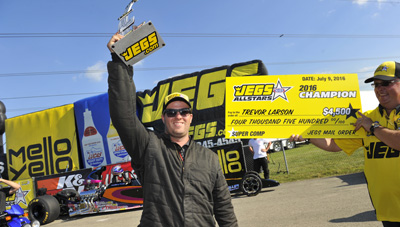 Trevor Larson
Over the last few seasons, it would be hard to imagine that anyone has scored more points in the Super Comp and Super Gas classes than Minnesota-based farmer Trevor Larson. A multi-time winner of the JEGS Allstars race, Larson posted a massive 688-point score in Super Gas in 2014, but it wasn’t enough to overtake champ Luke Bogacki, who put up one of the most impressive scores of all time with 731 points.  Last year, Larson enjoyed another strong season in both classes. In Super Gas, he scored 535 points en route to a 15th place finish while his 533-point score was enough for the No. 9 ranking in Super Comp. It doesn’t take too much imagination to see that Larson is just a few extra win lights away from claiming his first title.

Jimmy Hidalgo Jr.
Second-generation racer Jimmy Hidalgo Jr. is nothing if not consistent. One of many drivers who regularly compete in two vehicles, Hidalgo has finished no lower than fifth in the last three seasons in Stock eliminator while earned a pair of top ten finishes in Super Stock during the same period. Last season, Hidalgo was the sport’s second-ranked Super Stock racer and the third-best driver in Stock. The highlight of Hidalgo’s season was his near-double in Atlanta where he won the Super Stock title and scored a runner-up finish in Stock. 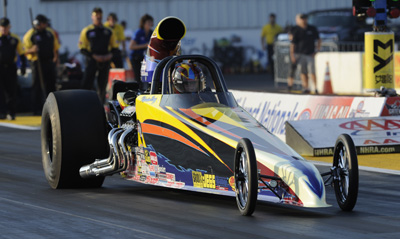 Ryan Richardson
If Ryan Richardson inherited even a fraction of his father, Edmond’s racing savvy, he’s destined for greatness. A consistent winner in E.T. bracket races since his early teens, Richardson is now 22 and has a pair of national event victories to his credit, both of them in Atlanta. In 2016, Richardson got off to a fast start with a win at the Division 2 Lucas Oil Series event in Atlanta, but his chances for a title, or even a top ten finish, were de-railed when he suffered a number of early round losses at mid-season. As tough as the super Comp class can be, that sort of variation is to be expected but that best racers have the ability to keep losing streaks in check and Richardson figures to be someone who won’t make the same mistakes twice.

Slate Cummings
If NHRA held more races at Route 66 Raceway near Chicago, Cummings would probably have already won multiple national championships. Nearly unbeatable at the annual JEGS Allstars competition, Cummings is also a consistent top ten finisher in Super Stock and Stock. Cummings’ résumé also includes several titles in IHRA competition which means he understands the rigors of a long, drawn-out points battle. Like several other drivers on this list, Cummings had a very successful 2016 season where he finished in the top 20 in both Super Stock and Stock. Another factor that works in Cummings favor is that he races as part of the multi-car Moser Engineering team that also includes his father, Larry, brother Britt, and nephew, Cole.

Jeff Lane
For all the up-and-coming young talent in this sport, there are still a few veterans who are long overdue to win a title and one of them is Jeff Lane. A force in the Pacific Northwest for more than two decades, Lane focuses primarily on Comp Eliminator and was the class’ third-ranked driver in 2016. Normally a season that includes four wins and two runner-up finishes would put a driver in championship contention but Lane, like everyone else in the Comp class, fell victim to eventual champ Doug Doll’s perfect eight-win season. Lane’s car is one of the quickest in the country and he can certainly drive with the best of them. His only potential stumbling block to a title is the fact that some Division 6 races have short fields, which limits a driver’s points-earning potential. As a side note, it would not be surprising to see Lane’s son, Cody, content for the Super Stock title at some point. 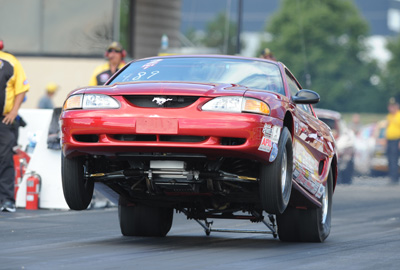 Nick Morris
Two years ago, Division 3 racer Nick Morris came within 12-points of winning the Lucas Oil Super Stock championship. Proving that was not a fluke, Morris turned in another solid season in 2016 that resulted in a nine-place finish. Morris reached the final round in two of his first four races, but faded down the stretch with a number of early-round losses in August and September. Will the third time be the charm? With a bit more consistency, it wouldn’t’ be hard to imagine Morris making a return trip to Las Vegas and Pomona in November with another chance to race for the title.

Steve Williams
Steve Williams has enjoyed so much success in Super Comp and Super Gas racing over the last decade that it comes as a surprise to many people that he hasn’t already won a national championship. Williams’ Super Gas Corvette and Super Comp dragster are the flagship entries of the K&N Filters fleet and the 11-time national event winner is often racing in the late rounds with one or both entries. During the 2016 season, Williams drove to a third place finish in Super Comp and was one of the top 25 drivers in Super Gas out of nearly 1,000 competitors.

Aaron Stanfield
Talk about talent? This kid has it in spades. The son of four-time Super Stock champ Greg Stanfield, Aaron made his Pro Stock debut three years ago and has since returned to the Lucas Oil Series, where he’s proven to be a versatile driver. Competing in Super Stock, Stanfield just missed a top ten finish by just six points last season but he enjoyed an even more successful year in Top Dragster presented by Racing RV’s where he finished No. 4 after two wins and a runner-up finish. Stanfield will be just 22 when the 2017 season officially gets underway which makes him one of the sport’s most promising young talents. 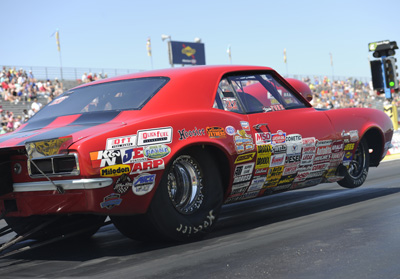 Steven Furr
Simple arithmetic dictates that drivers who race multiple entries have a better shot of winning a championship than those who limit themselves to a single entry. Another one of many drivers who can successfully campaign multiple entries is Division 2 ace Steven Furr. During the 2016 season, it looked for a while like Furr might be the driver to win two championships rather than Jeff Strickland.  After hot starts in Super Gas and Top Dragster, Furr was nudged from the top spot in each but still finished with a very respectable third-place rank in both eliminators. That sort of consistency certainly bodes well for another successful campaign in 2017.

Mike Sawyer
At 38, Sawyer isn’t exactly what one would call a “young gun” but that doesn’t mean he isn’t capable of winning a title. Sawyer’s father, Ray, was crowned the Super Gas champ in 2005 and Mike has come close to achieving the same feat several times in his career. Racing in the ultra-competitive Northeast Division, Sawyer finished eight last season and has been ranked in the top ten for seven of the last eight seasons. Sawyer was a championship runner-up in 2015 and 2011 and needs just a bit of luck to get over the hump and claim the top spot.